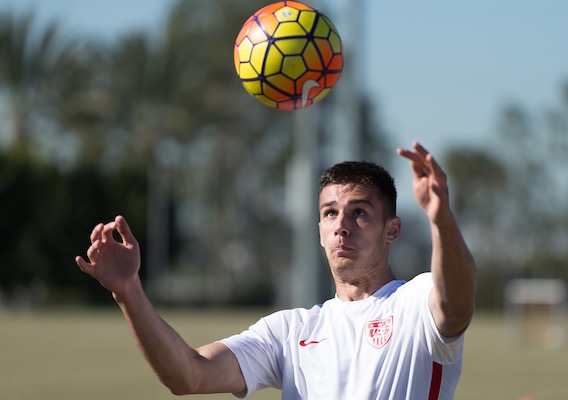 Here's Our Take on Matt Miazga's Move to Chelsea

The 20-year-old New Jersey native is on his way to Stamford Bridge, and ASN's Brian Sciaretta is here with some historical perspective, and a few cautionary tales, as Miazga heads to England.
BY Brian Sciaretta Posted
January 27, 2016
11:00 AM

MATT MIAZGA is bound for Chelsea, American Soccer Now confirmed Wednesday, in one of the most interesting moves made by an American player in years.

ESPN’s Jeff Carlisle was the first to report the news. At this point, it is unclear where and how the 20-year-old Miazga will proceed with Chelsea, one of the world’s biggest clubs, but a source with knowledge of the signing told Sports Illustrated’s Grant Wahl that the 20-year-old would not be sent out on an immediate loan.

2015 was undoubtedly a great year for Miazga, who emerged as one of the best central defenders in Major League Soccer and was also one of the best players at his position in the U-20 World Cup. Add that to his playing for the United States U-23 side as well as the full national team in a cap-tying appearance in a November World Cup qualifier, and Miazga was already a top player to watch. Now he’s even more so.

Here are my thoughts on the move.

Chelsea, a big-spending club, is not afraid to acquire loads of young players. The competition within the club is fierce, and Chelsea often signs players knowing several will never play a minute with the first team. The Blues may be having a disappointing season, but its talent, top to bottom, is immense.

If Miazga ends up making the first team, it will be a tough climb—and the battle to earn significant minutes will be extremely tough.

That said, it’s easy to see why any player would want to take this deal. After all, the chance to sign a deal with one of the world’s most recognizable teams is rare. But Miazga needs to play. If he does not go out on loan, will he stagnate on the bench? How does Guus Hiddink rate him? How will a tradition of frequent managerial changes affect his growth?

A loan (eventually) is likely

The odds seem to favor that Chelsea will indeed loan Miazga out at some point. The club currently has 32 players out on loan, nine of whom are defenders. He might play with the club’s U-21 team for a bit, forgoing a loan until the fall, but the likelihood of Miazga simply remaining with the Blues and transitioning directly into the first team is extremely small. But loans could be tricky, too.

For American players, some loans have worked out brilliantly. Brad Guzan’s move to Hull helped him develop into a worthy Premier League goalkeeper. Eric Lichaj was very popular in his time at Leeds United, and Tim Howard’s initial loan to Everton began a long and fruitful career with the club. Maurice Edu was productive at Bursaspor, and Jermaine Jones was popular when he was in the Premier League at Blackburn.

The sad reality, however, is that most loans have not been pleasant for Americans. Jozy Altidore was a non-factor at Xerez; Julian Green wasted his time at Hamburg; Jose Villarreal was never in the plans at Cruz Azul; and Freddy Adu, of course, bounced around endlessly.

The road ahead is going to be tough for Miazga, but you have to admire him for embracing this opportunity.

Breaking through at Chelsea would mean getting through an enormous volume of high-level competition and rising to the top. If he were to become a regular starter at Stamford Bridge, it would be one of the all-time greatest accomplishments for an American player abroad.

In other words, Miazga is going for it. He’s jeopardizing guaranteed playing time in MLS and potentially further development in order to pursue the opportunity to be world-class. Making a move like this is an impressive display of confidence.

Finally, you have to tip your hat to the New York Red Bulls organization. Dating back to its time as the MetroStars, it has been the place to be for American players making the move to Europe. Miazga is just the latest in a star-studded European pipeline including Howard, Michael Bradley, Altidore, and Tim Ream.

Is there something in the water in Harrison, N.J.? Because no other MLS club has a transfer track record that comes close to what the Red Bulls have.