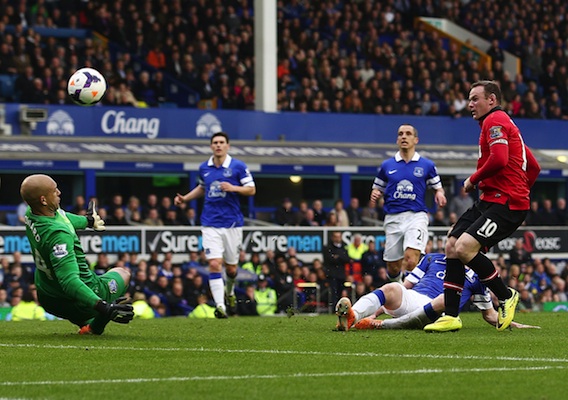 The just-completed season wasn't exactly a landmark campaign for Americans playing overseas, but ASN columnist Josh Deaver still found some performances worth celebrating.
BY Josh Deaver Posted
May 20, 2014
4:49 PM
ALL GOOD THINGS must come to an end, and this includes the 2013-2014 European season. For Americans playing overseas, it’s no stretch to say that this campaign fell a little flat. In a year that saw two of the most successful European-based American outfield players of all-time make their triumphantly disappointing—or was it disappointingly triumphant?—returns to MLS, the lack of star power was noticeable. Even with Clint Dempsey and Michael Bradley back in the Americas, several of their compatriots stepped up their games to fill that void. Without further ado, let’s get to ASN's first-ever Americans In Europe Awards!

Tim Howard—Everton
Rumors of his demise were greatly exaggerated. Ending the season ranked No. 2 in the ASN 100—his highest position ever—Tim Howard remains an indispensable part of the national team equation and is certainly the most prominent American abroad. Although Everton fell agonizingly short of making its return to the Champions League, there’s a case to be made that Tim Howard was the Premier League’s top keeper this season. While goalkeeping stats are notoriously difficult to quantify, Howard ended the year ranked in the top 5 in Premier League save percentage (74.5%), goals allowed per game (1.02); and shutouts (15, second only to Petr Cech and Wojiech Szczesny with 16). He also ranked in the top 10 for saves per game. Of those who bested Howard in various metrics, only Sunderland’s Vito Mannone faced as many shots as the American net minder. And only Arsenal’s Szczesny ranked alongside Howard in the top 10 of all the aforementioned categories. Having recently signed an extension with Everton that will keep him with the club until 2018, Howard is entering the twilight of his career, signaling that once his current deal expires he will hang up his gloves for good. At 35, it’s conceivable that this may be Howard’s final World Cup cycle as the starting U.S. keeper. RUNNER UP: Geoff Cameron—Stoke City
Geoff Cameron’s goal of a top 10 finish for Stoke City was met with much guffawing, but as you can see, table don’t lie. The Potters earned their highest finish (9th) and point total (50) since returning to the Premier League in 2008. Coming off a successful EPL debut campaign the year previous, the former Houston Dynamo man registered 37 starts and two goals for the club, finishing among the top 12 field players in total minutes played during the EPL season. Although Cameron has repeatedly stated his desire to line up at center back, he played nearly the entire season at right back for the club—a reality that has created more than its fair share of dilemmas for Jurgen Klinsmann. Despite some positional confusion, Cameron showed himself to be one of the more consistent defenders in England by finishing in the top 20 in both tackles and interceptions per game.

Alejandro Bedoya (Helsingborg to FC Nantes)
Upon making a move from Sweden to France last year, not much was expected Alejandro Bedoya. For one thing, Americans haven’t had much success in L'hexagone, save Carlos Bocangera’s last stint. Expected to fight for playing time on a recently promoted club in a quality European league, the odds were stacked against Bedoya. Despite all of that, Bedoya grew into an important soldier the Nantes phalanx, scoring five goals in 31 appearances for the Canaries and helping the club stay afloat. Resurgent with the national team and riding some fine form, the 26-year-old—a final roster cut in 2010—is now poised for his first World Cup appearance. RUNNER UP: Juan Agudelo (Stoke City to FC Utrecht)
If only by default, Juan Agudelo’s formerly-temporary move to FC Utrecht takes the silver. Awaiting a permanent move to England, the still-only-21-year-old forward provided three goals and just as many assists in 14 appearances for the club. Now, with his work permit denied and his contract with Stoke City terminated, Agudelo is a free agent who should find no shortage of suitors come this summer. HONORABLE MENTION: Oguchi Onyewu (QPR to Sheffield Wednesday)
His late-season form with the Owls wasn’t enough to secure his third consecutive World Cup appearance, but nonetheless Gooch elevated his game to the point where he was a fringe contender.

Jozy Altidore
During ESPN’s recent U.S. Soccer special, Jurgen Klinsmann summed up Jozy Altidore’s season in the nicest way possible. First classifying it as a “failure,” the ultra-positive head coach caught himself, instead characterizing Altidore’s dreadful run as “not successful over a long period of time.” That’s certainly one way to put it. Altidore followed up his 31-goal outburst for AZ Alkmaar in 2012-13 with a meager one league goal for the Black Cats during this past campaign, while being named to multiple (always fair!) worst Premier League signing lists. Sunderland manager Gus Poyet also chose the diplomatic route in assessing Altidore. “I’m quite relaxed with Jozy,” Poyet recently told Sirius XM radio. “I know it’s difficult for a striker when he doesn’t score, but I like him. I like him. I like him as a boy and I like him as a player. He just couldn’t find the net. Sometimes it happens.” Fortunately for him, a strong World Cup can induce temporary amnesia to the footballing world. DISHONORABLE MENTION: Brek Shea—Stoke City/Barnsley When Brek Shea left MLS for the bright lights of the English Premier League, for many, his stock was only rising. The unfortunate reality: The 24-year old never found a foothold with the Potters and, by all accounts, has regressed. In concert with off-the-field issues and a failed loan spell with Barnsley—a club relegated to the third tier of English football next season—Shea doesn’t appear long for Europe. Now, the rumor machine is cranking up a possible MLS homecoming. Jurgen is displeased by your comfort zone.

Aron Johannsson—AZ Alkmaar (26 goals, 51 appearances)
Klinsmann’s dual-national gems continue to come up aces across the Atlantic. In his first full season with the Dutch-Amero striker factory AZ Alkmaar, Aron Johannsson kept up his stellar output, netting 26 goals in 53 appearances. His goals are so good and so frequent that they've become routine. While in any other year this may be enough to contend for the title of best American international in Europe, the ongoing cautionary tale of Jozy Altidore have made U.S. observers keenly and perhaps rightly suspicious of Eredivisie success. RUNNER-UP: Terrence Boyd—Rapid Vienna (20 goals, 38 appearances)
Posting six goals in his final games for Rapid Vienna to wrap up the Austrian campaign, Terrence Boyd arrived in national team camp with his boots smoking and confidence soaring as the latest American to score 20 goals in a European season. Although Johannsson takes home the Golden Boot, Boyd has produced a more consistent strike rate of the two dual nationals, averaging one goal for every 133 minutes played compared to 161 for Johannsson.

GOAL OF THE SEASON

Aron Johannsson
He’s produced several scintillating strikes this season, but this effort takes the top prize. Just sing along with me: “Footloose, footloose…”

Tim Ream—Bolton
The hands-down winner. This time last year, Ream had made only one appearance for Bolton in three months before being given a conciliatory start on the last match day of the season. Languishing on the bench in the English second division, Ream appeared to be a washout in the making. Then something happened. While an improved season would’ve been a welcome sight for the former Red Bull,