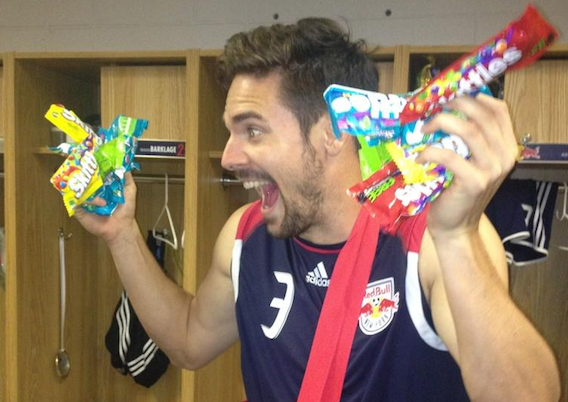 Heath is Happy and Freddy Adu Drops Some Truth

Jesse Yomtov filters the Twitterverse to find the best from your favorite United States national team players. He finds advice from a young star, waffles, and plenty of love for Jay DeMerit.
BY Jesse Yomtov Posted
October 27, 2012
6:40 AM
10. Robbie Rogers—Could a Cali boy say anything more Cali?

Political pundits of twitter land. Relax, get to a dance party today and shake off that animosity.

Today was "sing in the car going to training" day. Artists include but arent limited to Hootie and the Blowfish, Boyz 2 Men, and Soulja Boy.

8. Eddie Johnson—Surely the kid on the right is thrilled his face is now plastered on the Internet.

First year ever playing soccer was 9 years old. Mom could of at least got me a haircut for picture day. twitter.com/eddie_johnson7…

7. Alejandro Bedoya—Good to see Ale taking up the fight against Man UGGs.

'Tis the winter season where guys whip out their UGG boots to combat the freezing weather!! Lol ???? twitter.com/AleBedoya17/st…

Raise your hand if ur eating pancakes. #bfast

3. Heath Pearce—Have you ever seen anybody so happy about anything?

Because of @burnsent and @skittles, today is a special day. I arrived at training to a box full of this! #speechless twitter.com/HeathGPearce/s…

To whoever it may concern, I'm very thankful for the heat from these seat warmers but u are causing me to sweat, Sincerely, my butt cheeks

1. Freddy Adu—Freddy probably knows this more than anyone else.

Sometimes people don't understand how hard it is to be a pro athlete. They only see the glam but a lot goes into it physically and mentally