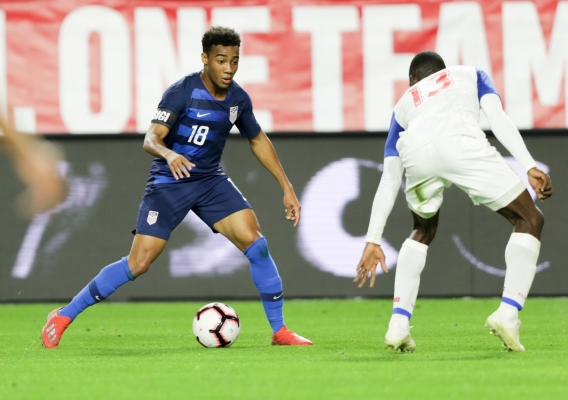 Jonathan Lewis is not one of the players many people expected to be a USMNT contributor to start the new cycle, but Florida native's numbers are outstadning whenever he plays. Now after a strong January camp, Lewis is eager to prove himself against more difficult opponents and alongside the best USMNT players.
BY Brian Sciaretta Posted
March 19, 2019
11:00 AM
THE NEW LOOK United States is assembled in Florida ahead of its upcoming friendly against Ecuador on Thursday. It is the first series of games new manager Gregg Berhalter will have with his full contingent of players and many expected faces like Christian Pulisic, Weston McKennie, Tyler Adams, and DeAndre Yedlin are in camp.

But there are also plenty of surprises on the roster and Jonathan Lewis is a player few would have expected to be on the team back in 2018. His fortunes started to change earlier in the year when he was a late invite to January camp because Berhalter decided he needed another winger on the roster.

But when given an unexpected opportunity, Lewis seized it. He impressed in camp and came in as an offensive substitute against Panama and promptly set up an assist. Then against Costa Rica, he assisted again off the bench and helped the U.S. team win both games.

Despite being eligible for the Olympic U-23 team, Lewis is optimistic he can play a role with both the Olympic and full national team moving forward so long as he maximizes his playing time with his club, New York City FC, and builds off his performances with the U.S. team in January.

Lewis is an interesting case for Berhalter. He came into the league rated highly as with the third overall pick in the 2017 draft. His minutes at New York City were inconsistent in his first two seasons. He was also on the U.S. U-20 team that won CONCACAF for the first time ever in 2017 but he did not make the U-20 World Cup roster. But with NYCFC, the U.S. U-20 team, and now the full national team, whenever he was on the field, he performed well.

The numbers Lewis has put up compared with his minutes are impressive. In just 659 career minutes for NYCFC, Lewis has three goals and five assists. In 44 minutes for the U.S. team, he has two assists. For the U.S. U-20 team at the CONCACAF Championships he had a goal and an assist over 149 minutes.

“We're looking at him as the game changer,” Berhalter said of Lewis. “A guy who can come in off the bench and make an impact…Now it will be interesting to see if he can do that against difficult opponents. That's going to be the real test of him. But he's another player who has a real thirst to learn, has a great attitude, and executed when he was asked to.”

“You say is it more beneficial for him to play with the U-23s or is it better to have him involved with the first team? This was a tough one. It was tough because what we saw was that he did make an impact for us coming off the bench…It's hard for me to not reward a player when he gives exactly what was asked of him.”

But the U.S. team has been thin on wingers in recent years – even including the players in Europe. And Lewis made a strong opening statement that he just offers something different than other players in the pool.

“I think with way Gregg wants to play, he looks at our squad and says: 'we have talented wingers that can go at players,’” Lewis said. “It's definitely about breaking lines with central midfielders and getting out wide to guys in isolation. A lot of it is very fluid with free movement among the front three. A lot of it is getting it out wide with wing play. That is where I come into play. He thinks I am very good going at players.”

Like many young players, the Olympics are a priority for Lewis and he is aware of the stigma of how the United States has failed to qualify for the last two Olympics. But he is optimistic that the 2020 team will be different.

For one, this current U-23 team will be built off the last two U.S. U-20 team which each won the CONCACAF championship without many of the best age-eligible players. Also Lewis insists that winning the Olympics is a priority for many of the players of his generation to make a big statement on the start of a new era for American soccer.

“A lot of the guys in my age group we feel like we are a new generation, a new era with a new type of players,” Lewis said. “There is a lot of quality from the 1997 age group on down that are playing overseas or playing consistently in MLS. There are a lot of guys 18-19 who are starting abroad and starting in MLS. Josh Sargent, Tim Weah, Christian Pulisic are all eligible for the Olympic. Then you look at Brazil and they brought Neymar. Why can we bring Christian? We have a very talented team.”

In an era where there has been a growing number of top young American players moving to Europe, there are signs that MLS might become a starting point for these players before making the jump. Lewis believes the recent moves of Tyler Adams and Canadian forward Alphonso Davies to big Bundesliga clubs could be the start of a growing trend.

Lewis is excited by this trend and notices that the quality of the league improving with the shift of imports now transitioning from older Europeans to young South Americans. But he also hopes that the American players can raise their game and be given a fair chance in an improved domestic league.

“Because of the South Americans and the other foreign guys who are coming over, the league has moved away from the image of a retirement league,” Lewis discussed. “It's becoming a place where young players can really come and play, show themselves, and move to big European teams. And they're not going there to just play, they're going over there to do well. Jack Harrison is starting at Leeds. Tyler has started with Leipzig. Alphonso Davies has played for Bayern Munich. Almiron is doing well at Newcastle. It goes to show there is talent in MLS.”

“Now it's time for the American player to push forward and also be given the leeway to develop. In my opinion, if you don't have any room for error, you can't develop completely,” he added. “But certain clubs have their philosophies and they're pushing a lot of young players. It's good for the league and it's good for U.S. Soccer. MLS can be a really good stepping stone for Europe and they can make a lot of money selling players like they did with Tyler, Davies and Almiron.”

Like Davies and Adams, Lewis is adamant that Europe is the top goal for him. For now, he has to earn that starting spot and continue to learn from NYCFC boss Dome Torrent who is working with Lewis to improve his game with the ultimate goal of having him ready to play at the highest level.

“Every player wants to play Europe,” Lewis said. “With Dome Torrent - he has coached at the highest level and has given me lots of feedback. He said a player I reminded him of is Raheem Sterling so yesterday he was showing me videos of Raheem Sterling defending. I know he's come down harder on me defending and said I've been getting better defending. But these are the little things he's trying to help me with to get to the top level. When I get on the field, I have to perform to get European interest. But this is a good place to learn and get games under my belt.”