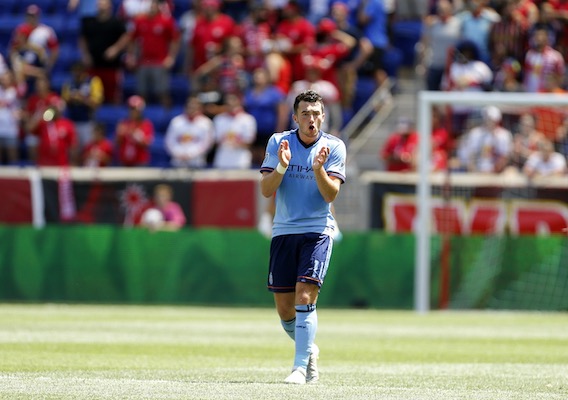 Jack Harrison scored a first-half cracker to lead New York City FC to a 2-0 win over the New York Red Bulls in Harrison, N.J. It was a dominant display from the visitors, who controlled the game from start to finish.
BY Franco Panizo Posted
June 24, 2017
11:00 AM

NYCFC went into Red Bull Arena on Saturday afternoon and put forth its best and most complete performance in this fledgling rivalry. Impressive goals from Jack Harrison and Ben Sweat on either side of halftime made the difference on the scoreboard, but the difference on the field was much larger.

For once and at last, NYCFC matched and even bested the Red Bulls in terms of energy and physicality. NYCFC was also superior from a tactical standpoint, executing a gameplan that was impressive and void of the type of mistakes and turnovers against the Red Bulls’ high press that have bitten Patrick Vieira’s side in the past.

The end result? A second win in the Hudson River Derby, the first away from home, and scenes of euphoria between NYCFC and its fans after the final whistle.

“If we wanted to give ourselves chances to take the three points, we needed to match the competitiveness, the desire, and I think we did it really well today,” said Vieira. “We make it really difficult for them, we forced them to play long ball, we were present in the second ball. I think one of the reasons as well that we managed to win the game is that we matched the desire and competitiveness.”

While NYCFC deserves credit for the way it came out and handled a Red Bulls side that entered the day with an all-time record of 6-1-0 in this series, Jesse Marsch and his side also deserve blame. This comprehensive defeat was not only the result of getting outplayed and outhustled, but also for not showing up at all for a match against its most bitter nemesis.

Frankly, the Red Bulls were nowhere to be found on Saturday. The club was toothless in the attack, its high press was rendered useless by a smart NYCFC gameplan, and the players finished second-best in most aspects from the run of play. Sacha Kljestan and Bradley Wright-Phillips, the Red Bulls’ most dangerous weapons, were somehow mere spectators. The team also finished with one shot on goal, a harmless side-foot effort from distance from Kemar Lawrence that NYCFC goalkeeper Sean Johnson dealt with easily.

This was a frustrating and troubling performance no matter how you chopped it up, and Marsch will rightfully get a sizable portion of the blame for not being around—on this week of all weeks—to prepare his team. No, Marsch leaving for Europe to work on his coaching license was not the sole reason his team lost so handily, but it was a contributing factor at worst and a bad look at best.

He refused to acknowledge the matter.

The Red Bulls have not been anywhere near close to its best version in 2017. Marsch’s men have just 17 goals in as many league games this year, and don’t appear to have a Plan B in terms of style of play. Opposing teams have figured out the Red Bulls’ high press—Vieira admitted to his side being OK with playing long balls to avoid turnovers—but the tactically rigid outfit has yet to find a proper response.

That is why you saw David Villa, Rodney Wallace, and Jack Harrison cause the Red Bulls’ fits throughout the 90 minutes. Harrison was especially good, taking turns between aggressively getting on the end of balls played down his side and dribbling up the flank or looking to combine with teammates in an effort to carve open the defense.

Harrison scoring the winner on a well-taken effort in the 33rd minute was just the icing on the cake for a young player who has shown plenty of promise in his first two seasons as a professional. It is only a matter of time before bigger clubs from overseas come calling, but it might be in the U.S. national team’s best interest for NYCFC to keep him around a little bit longer.

“[Playing for the U.S.] is something I’ve thought about, but that’s something for the future,” said the 20-year-old Harrison, who was born in England but has lived in the U.S. since he was 14. “Right now I’m just focused on being at this club, and doing everything I can, [but] no, I’m not opposed to it.”

Harrison’s international future may not be decided for some time, but NYCFC fans will not mind one bit so long as he continues to help deliver dominant performances and satisfying results like Saturday’s. Yes, NYCFC has at long last exorcised its demons at Red Bull Arena, and a blueprint of hard work and effort has been laid out for future fixtures against the its struggling rivals.

“We are very happy because we’ve spent a lot of time working for this, to give the three points and the Hudson River Derby to our supporters that always come here for the game to support us,” said Villa. “[This is] the first time I think we did well. We did a very good game.

"We didn’t concede a lot chances for Red Bulls. We are dangerous when we have the ball, compact when we don’t have the ball, and finally the three points is so good for us.”

What did you think of the New York City derby? Share your take below?