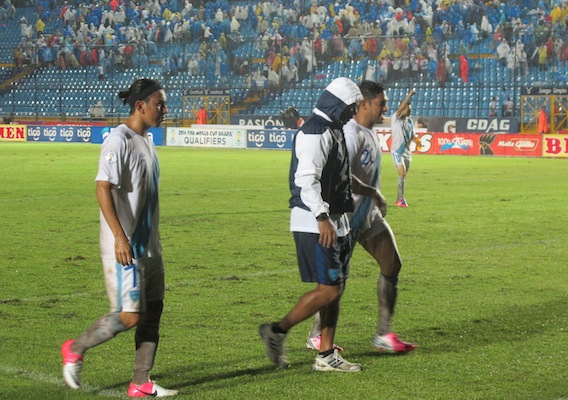 The United States' next opponent is a flawed squad that will play for a point. But they can present a problem for the Americans if Jurgen Klinsmann does not pay attention to a few key factors.
BY Brent Latham Posted
October 14, 2012
12:45 PM

GUATEMALA CITY, GUATEMALA--Heading into Tuesday’s monumental clash with the United States, Guatemala’s players and coaches couldn’t be any clearer.

After their somewhat surprising 2-1 win over Jamaica at home on Friday night, the goal in Kansas City is to get one point and advance. Nothing more.

Sure, the Chapines would like to win. But that’s not really the plan. A tie will send Guatemala through to the final round of CONCACAF World Cup qualification. And a tie is exactly what they seek.

“The way the things have gone, we know what result is convenient for us,” said goalkeeper Ricardo Jerez after the win over Jamaica. “We did what we needed to do and got three points at home, and now the tie is the result that’s most convenient for us.”

Even with the recent fluctuations in form of Jurgen Klinsmann’s side, few in the Guatemalan camp are talking about going to the U.S. and winning the match.

“We know what type of team it is we’re facing,” said Jerez. “We want to win every game. But getting a point is the realistic option for us.”

On the surface, that sounds pretty positive for the Americans. Since the only result that could possibly keep them out of next year’s Hexagonal is a loss on Tuesday, a team intent on getting just one point seems like an ideal opponent.

But is it all a trap? That will depend on how Klinsmann decides to go about things in Kansas City.

Guatemala isn’t an overly talented side. Two players on the squad have no club team, and only two play outside of Guatemala—Chile-based Minor Lopez and new Heerenveen recruit Marco Pappa. The rest call the Guatemalan Liga Mayor home, except for central defender Ruben Morales, who plays in the country's second division.

Yet Morales has become a default starter for a national team that is down four center backs to injury and two more to bans from this summer’s match-fixing scandal. All that adds up to a wounded and inexperienced backline.

“We have a pretty experienced side on the offensive side of the ball,” said central defender Elias Vasquez, the captain of the U-20 side that prevented the U.S. from reaching the 2011 World Cup at that age level, and the most experienced central defender likely to play on Tuesday. “We just hope to hold our own in the back, and for the offense to do its thing.”

Vasquez and Morales were the only healthy central defenders available against Jamaica, though veteran Claudio Albizuris, who isn't a national team regular but has 34 caps to his name, may regain fitness in time for Tuesday’s match. Either way, expect Coach Hugo Almeida to revert to his preferred three central defender, five-in-the-back alignment in an attempt to slow the game down.

It all sounds like a recipe for eventual American success, at least in terms of getting the needed point. But care is due. Facing a team down to their sixth or seventh centerback options provides an opportunity, but only if it’s taken.

Guatemala might lack star power, but the Chapines of late are a team with a distinct killer instinct. Give them any initiative, and the scrappy side will find a way to score through their evergreen, now club-less hero, Carlos Ruiz, who’s netted four times in the last three qualifying matches.

“Carlos has a lucky star above him,” teammate Mario Rodriguez said of the country's all-time leading scorer. “The circumstances don’t matter; he’s going to find a way to score goals. The inactivity may affect him as a person, but it’s never going to change him as a goal scorer.”

Carlos Ruiz waits for a cross against Jamaica.

Cut loose by Mexican second division club Veracruz this summer, and unable to find a team since, Ruiz has been training non-stop with the Bicolor at Project Goal in Guatemala City.

In fact, you could say with only slight exaggeration, he lives there.

The national team has trained together during the week for months now, staying at the dorm on the campus of the Federation and becoming a tight group. The unit has one mission under Almeida: get to the country’s first-ever World Cup.

The talent deficit vis a vis the U.S. is real, but it will only become important if the Americans commit to the attack. The temptation for Klinsmann will be to clog up the flow with two or three holding mids, stifle movement in midfield, and play for the point the U.S. desperately needs.

Jamaica made a similar mistake against Guatemala and went home with a loss. The Chapin attack is haphazard and disjointed, but comes mainly up the wings with the idea of getting the ball into the box however possible, and allowing Ruiz to do what he does best.

Even when teams know that’s what's coming, Ruiz is a remarkably efficient scorer with 54 goals in 103 national team apperences. If the Americans aren’t careful, he’ll do it again in Kansas City, and take the U.S. World Cup chances with him. With Marco Pappa inactive since leaving the Chicago Fire and clearly struggling for form, Ruiz is probably the only real worry for the U.S. defense. But just like this Guatemalan team in general, it’s a very real worry.

Given Guatemala’s limited strengths and clear weaknesses, the correct game plan can make Tuesday night a comfortable one for American fans. The wrong approach could well turn it into a nightmare never to be forgotten.

Brent Latham is a writer and commentator for ESPN.com and other outlets. He lives in Guatemala.