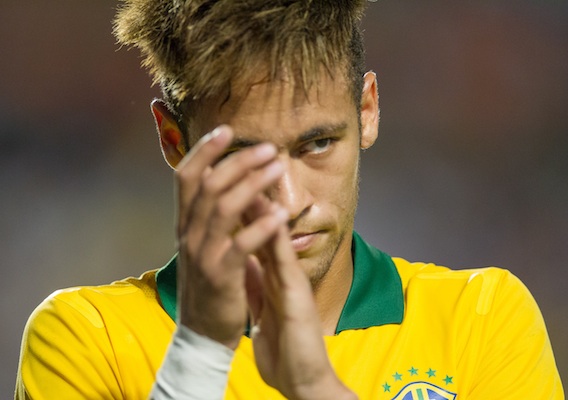 Group A First Look: Brazil & Mexico Will Make It Fun

Brazil and Croatia will kick things off in Sao Paolo on June 12—for Group A and for the entire 2014 World Cup. Samuel Mintz provides a quick snapshot of the key matchups, the American angles, and more.
BY Samuel Mintz Posted
December 18, 2013
2:53 PM

Unfortunately for the other three contenders in Group A, there will only be one name on everyone’s lips when the actions begins: Brasilia. You can bet that the hosts will be ready to move past the media buildup, the stadium construction issues, and the public protests so they can get on with the competition. With the first match of the tournament and a couple of its most interesting teams, this group will be at the center of attention. While Group A isn't necessarily one of the toughest groups in the draw, it has the potential for some extremely competitive games. And it’s one of the few groups where all four teams stand a good chance of advancing. Brazil are among a handful of favorites to contend for the World Cup title, and have a star-studded line up from top to bottom. Croatia is a sneaky good team with a skilled and organized midfield, and it endured a baptism by fire in the difficult European qualification process. Mexico will be desperate to save face after a disastrous qualification campaign, but with a new coach and new look squad, it will be somewhat of a mystery team come June. Cameroon feature several international legends in Samuel Eto’o and Alexandre Song who were convincing in a 4-1 playoff victory over Tunisia to qualify. It should be a real dogfight for those top two spots, especially the second, and each group game will feel like everything is on the line. It feels unfortunate that two of these teams will have to go home after only three games, because all four would be fun to watch in the knockout rounds.

Brazil vs. Croatia, June 12, Sao Paulo
If you watch one World Cup game (outside of the U.S. matches, that is) make it this one. The entire country will be partying, the stadium will be rocking, and expect Brazil to play some absolutely beautiful soccer. Paulinho vs. Luka Modric
One matchup in particular will standout in that opener: a former Tottenham star against his replacement. The two have strikingly different styles: Paulinho is a solid defender with a touch of flair, and Modric is a tricky creator who can pick out long passes. Brazil vs. Mexico, June 17, Fortaleza
This battle of North American and South American superpowers will be intriguing to watch, largely because both teams have struggled with identity crises in the recent past. Until its triumphant victory in this summer’s Confederations Cup, Brazil had been struggling competitively. Mexico, meanwhile, nearly failed to qualify for the tournament, needing a playoff against New Zealand to seal its spot. Battle of the midfields, Mexico vs. Croatia, June 23, Recife
In a match that could decide second place in the group, a Croatia midfield packing veteran stars like Luka Modric and Niko Krancjar will go up against a mysterious Mexican midfield likely to showcase some new talent.

Samuel Eto’o vs. Croatia back four
One of many world-class strikers on display at this tournament will face an exciting challenge as he goes up against a skilled and organized back four led by former Premier League star Vedran Corluka.

There are few things American soccer fans enjoy more than rooting against Mexico. Throughout 2013 we watched with giddy delight as Mexico struggled on the pitch and fought amongst themselves off it. Add that to the fact that there are club teammates and other professional crossovers between the Mexican national team and the U.S. squad, and you have a recipe for highly engaged American fans. The U.S. has a history with Brazil, too. The 2009 Confederations Cup title was well within the grasp of the Americans, but a three-goal second half ended those dreams for Bob Bradley and co. More recently, Brazil thumped the Yanks, 4-1, in an action-packed friendly earlier this year.