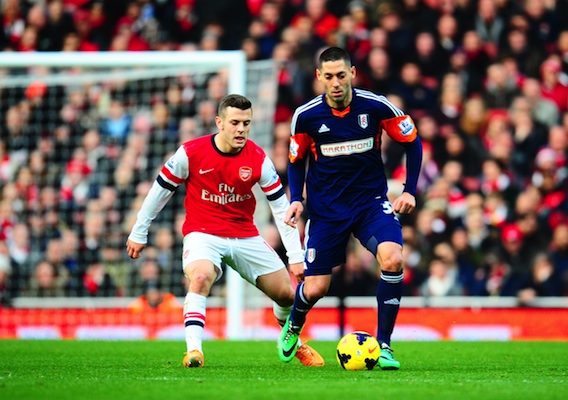 Every week Josh Deaver tracks the recent activities—good and bad—of the top American players at home and overseas. Here is the latest installment of his ASN 100 Update.
BY Josh Deaver Posted
January 21, 2014
3:38 PM
Clint Dempsey—ASN rank #5
With Fulham mired in a fierce relegation battle, the addition of Clint Dempsey was supposed to be an ace-in-the-hole for the Whites, a secret weapon in the fight to stay up. Instead, the American captain has failed to spark the struggling side. The clubs interminable misfortune continued on Saturday, falling 2-0 to league leaders Arsenal, once again dropping points and ending the weekend only one point clear of safety. Against the Gunners, Dempsey started and played 90 minutes in the effort but failed to make much of an impact—he was tentative going forward and registered a shockingly low five touches inside the attacking third during his shift. Fulham next take on Sheffield United in the FA Cup before resuming league action in a vital six-pointer against suddenly slipping Swansea. Aron Johannsson—ASN rank #8
In a return to Eredivisie action, the Icelandic sensation continued his red-hot form for AZ Alkmaar, playing 90 minutes and scoring his 12th league goal of the season in a 3-0 win over NAC Breda. Up 1-0 in first-half stoppage time, the 23-year-old deftly slipped his marker and was able to turn home a cross from Nick Viergever at the far post to put the home side up by two. The goal pushes Johannsson’s total to 19 in all competitions. Brought into Alkmaar to replace the production of the outbound American Jozy Altidore, Johannsson has very nearly equaled the tally of the now-Sunderland striker from this time last season, all while boasting a nearly identical goals-per-minute ratio. (Let’s just be careful on that next club move though, Aron.) Johannsson will be looking to expand his tally on Tuesday when Alkmaar takes on Roda JC in the quarter finals of the Dutch Cup.
AZ NAC Johannsson by goalsandmore Brad Guzan—ASN rank #12
Guzan got the start for Aston Villa this weekend, playing 90 minutes and making five saves in a 2-2 draw with Liverpool. Despite a good individual season from the Chicago native, it’s been a familiar refrain; brilliant between the sticks with a lack of support at the back. Villa netted twice early on, giving the Reds time to get back into the game. And it eventually did, pulling one back in first-half stoppage time before evening things up with Luis Saurez drawing a penalty on Guzan, who ventured outside his box to challenge the Uruguayan. Needless to say, it was a close call. On the ensuing penalty kick, Guzan guessed correctly but could not keep out Steven Gerrard’s shot from the spot. To Guzan’s credit, however, it could have easily been a full three points to the Reds if not for some vital late saves. The result finds Villa 10th on the EPL table, but only six points clear of the relegation zone. Terrence Boyd—ASN rank #24
Another American striker on the periphery in 2014, Boyd continues to get steady reps during the winter break for Rapid Vienna. Looking eager to continue the Bundesliga campaign, the 22-year-old played 90 minutes, scoring two goals in an 8-0 win over SVG Guntramsdorf on Wednesday. On the back of a five-match winless streak, Rapid enters the second half of their campaign in third place on the Austrian table with 31 points. Juan Agudelo—ASN rank #34
We’ve known for some time that Juan Agudelo was heading to Stoke City—work permit be damned. But until the legalities can be worked out, the 21-year-forward is set to officially kick off his European career with Eredivisie side FC Utrecht on a six-month loan. The deal was officially announced by the club on Monday morning after Agudelo tweeted details of the move this weekend. Sitting mid-table in the Dutch league, Utrecht has lost three straight, including Saturday 5-2 defeat to Feyenoord. Assuming Agudelo passes medical tests, he could see his debut in a cup match against NEC on Wednesday or against Roda JC in league action next weekend. Oguchi Onyequ—ASN rank #75
After being officially introduced earlier this week by Sheffield Wednesday, Onyewu made his debut on Saturday for his new club, playing 90 minutes and picking up a secondary assist in a 1-1 draw against league leaders Burnley. Unused by QPR in his brief spell, the intra-league move appears to be a good one for the 31-year-old, who finds himself in a favorable situation on a squad in desperate need of defensive cover. He will surely find minutes, but can he join the ranks of several Americans currently succeeding in the English second division? Andrew Wooten—ASN rank #94
Sometimes, all you need is a change of scenery. Since his transfer last week from Kaiserslautern to fellow 2.Bundesliga side FSV Frankfurt, Wooten has been on fire. The 23-year-old has already seen the score sheet more times than he did all season for FCK. In his limited spell during winter friendlies, Wooten has netted three times in two halves of play, scoring his first in a 4-2 loss to Mainz on Monday while picking up both goals in a 2-0 win over SV Wehen Weisbaden over the weekend. Frankfurt, which sits 13th in the 2.Bundelsiga table, play one more friendly match next week before continuing its season on February 7th against Bochum.