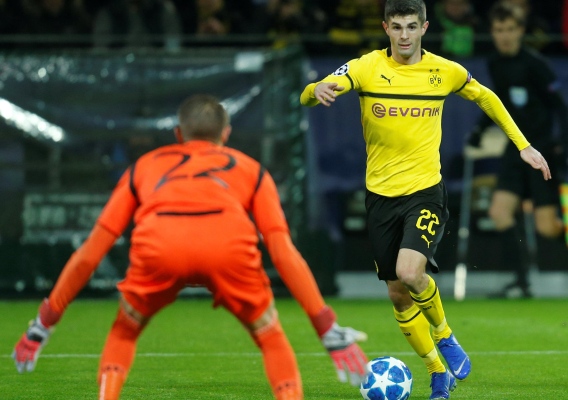 Several Americans were in action this week, including in the UEFA Champions League. Back home in Florida, the U.S. U-17 team took on Portugal in the NIKE friendlies.
BY Brian Sciaretta Posted
November 29, 2018
4:00 AM
IT WAS A busy week of midweek action for Americans abroad as players took part in both the Champions League and the English Championship as two Americans played each other in the world’s top club tournament and a U.S. national team regular earned a rare start.

There is also a bit of news to in that multiple reports are now suggesting that Gregg Berhalter has indeed been hired as the news U.S. national team head coach. That news will come as a surprise to no one and ASN will have more on this as details unfold.

The NIKE friendlies are often the biggest slate of games for the U-17 team outside of the World Cup and the 2018 edition opened yesterday with the U.S U-17 playing to a 1-1 draw with Portugal. Here’s a breakdown.


It is rare when two American players start against each other in the UEFA Champions League. But that happened on Wednesday when Borussia Dortmund and Christian Pulisic hosted and played to a scoreless draw with Club Brugge.

It was a relief to see Pulisic start as his minutes have been cut back in recent months where he’s been mostly coming off the bench. Horvath, meanwhile, continues to play well for Brugge since reclaiming the starting spot in October. Pulisic had his moments but overall looked rusty in his return to the field and he had a clear shot from close range that he hit right at Pulisic in the first half.

Horvath didn’t have to do that much and benefited from a Dortmund that that was content with a draw and a defensive approach from Brugge. Still, it was his second Champions league shutout of the year and he will now have a chance in the Europa knockouts to keep playing at a high level.


United States national team central defender Cameron Carter-Vickers earned just his third start of the year on Wendesday for Swansea City and went the full 90 in a 2-1 home loss to West Bromwich. The loss was the club’s third in its last four games.

On loan from Tottenham, Carter-Vickers has seen a sharp reduction in his minutes from last season where he played in the Championship for both Sheffield United and Ipswich Town.

In the loss to West Brom, Carter-Vickers was decent in a three man back-line but was overwhelmed trying to cover for his teammates on set-piece defending – where he often had to cover more than one attacker.


On Tuesday, Lynden Gooch continued his torrid streak for Sunderland with his third goal in four games. His beautiful strike in the 32nd minute helped give Sunderland a 4-2 win over Barnsley and a firm grip on second place.

The third-tier of England is not a high level but Gooch is one of the best players on one of the best teams. Sunderland is still a huge club that has fallen on hard times lately. Gooch is showing himself to be a big part of the equation to get the club back to a high level. Every game he is playing hard and willing Sunderland to results. Tuesday's goal was first-rate.


Lynden Gooch’s big goal today for Sunderland was sweet. He’s on fire and #SAFC is into 2nd place of League One with a win today pic.twitter.com/opIjCkhTQI


The United States U-17 team will be disappointed to finish 1-1 against Portugal after it led most of the way but conceded at the end.

The U.S. goal was scored in the 36th minute by DC United’s Griffin Yow who capitalized on a Portuguese mistake in the backline to send a low shot into the back of the net. Then in the 56th minute, U.S. goalkeeper Damian Las kept Portugal off the board when he made a diving stop on a header, to deny Portugal its best opportunity of the game up to that point.

Portugal scored in the 81st minute when Gerson Sousa beat Joe Scally on the left side and sent in a low cross that was hammered home by Tiago Tomas. It was a tough break for Scally who was one of the best American players in the game.

The U.S. team’s best player in the game was Gio Renya who was strong in possession with skillfull dribbling and passing. The son of the former U.S. captain nearly won it in stoppage time but his 1v1 with the keeper was saved.

Next up for the Americans will be Turkey on Friday.