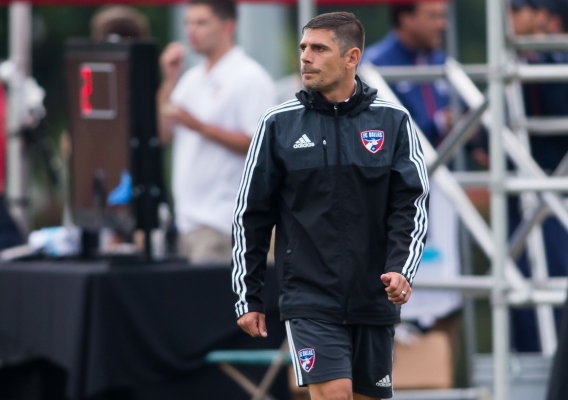 Earlier this week, Luchi Gonzalez was named the new head coach at FC Dallas. As the former academy director, Gonzalez will now be tasked with leading a squad that consists of several top American youth internationals. ASN's Brian Sciaretta spoke with Gonzalez on his vision for the future.
BY Brian Sciaretta Posted
December 19, 2018
1:50 PM
NEW YORK – On Monday, Luchi Gonzalez was unveiled as the new coach of FC Dallas to replace Oscar Pareja. As the club’s standing academy director, Gonzalez oversaw the development of many of the club’s key prospects and now he will take the reins of the first team at a time when the top youth players are going to be making a transition to the first team.

Gonzalez took the time to give a lengthy and insightful interview with ASN on his plans for the club after the promotion to the first team and how he sees player development at FC Dallas.

Brian Sciaretta for ASN: Congratulations on the promotion as head coach of FC Dallas. A lot was made of at your introduction as being one of player development and utilizing the players that are coming through the Dallas academy. Are you planning to take a youthful approach in your first season?

GONZALEZ: That is one of the approaches. I think we have some good young players that had some level of opportunities last year and they're ready to grow on that. Some players were loaned out to USL teams and had some success and that was a vote of confidence and their potential. So yes, absolutely, we're going to be looking internally to allow players to earn opportunities at the highest level and give them confidence and believe in them. But they're going to need to earn that.

ASN: When you look at what Atlanta has done with some massive influx of impressive talent and what Toronto and Seattle did before that, those teams were aggressive in the designated player market. When you said at your introductory press conference that your team didn't want to buy players but rather develop them, do you believe you can contend for an MLS Cup with that model?

The focus is going to be optimizing the people we have so they gain value over time and produce. If that means transferring or selling them at one time, fantastic. If not, then they're going to be efficient for us doing everything to win a cup.

Today and for the future, I believe in MLS that any model is open to winning a championship.

ASN: When you look at the FC Dallas youth teams or the academy, it has sent a lot of players to the current U.S. youth national teams with Brandon Servania, Paxton Pomykal, Thomas Roberts, Chris Richards (if he comes back from his Bayern Munich loan), or even Reggie Cannon who is with the full national team. Aside from Cannon who started for Dallas, how ready are these young players for the jump to being regular professionals at the first team in MLS? That is a big jump for some of them.

Gonzalez: We're adding a second team for 2019 and to me that is just as important as any of these transitions we're going through. That is going to help that young player coming from youth national teams or from the academy to playing professional games against men who are in a league competing for points and with pressure. That will help them adapt to the speed, the physicality, the tempo. That's going to help our model. That is going to help those young players be even more prepared. Servania would have had potentially 20-30 professional games last season if he was in our second team, hypothetically.

For me, that's something that is ongoing to improve right away and the owners are investing in it because they believe that the pathway just needs more development. It's also about giving opportunities. No player is going to be ready until they have to be. No player is going to find solutions in a stadium against other veteran players until they have to really dig deep and use their resources and respond. We will have a culture in training that is all about that. Nothing is going to be given away here. This is going to be done responsibly. With balance and with care.

ASN: When you were the academy director and Oscar Pareja was the head coach, there were lots of stories about how you worked together and how Oscar would often incorporate academy players into first team training, that he would often be at academy trainings, and they sometimes trained on neighboring fields at the same time. How is your relationship going to be with the academy now that you are in Oscar's role? Is it going to be the same thing, just with the roles reversed?

Gonzalez: That is absolutely my responsibility. Absolutely. It's not that I have to do that or that I am willing to do that. I absolutely want to do that. If not, I wouldn't be in this role. I love that role. That is where Oscar was a true example of just being connected - coming to watch our U-12 team compete at a showcase or coming to see our girls youth games and supporting them because we are all a community here. That is something I want to honor and I want to maintain because I love our youth, our young coaches and experienced coaches. I want to connect with the second team and our academy will continue to be fully integrated.

Some people are saying that now with a second team, now our top 17 to 19 year olds aren't going to train with the first team. But that's only if you don't manage it well. We're going to have more movement. Now with a second team, the talent is going to suck upward like a vacuum. We're going to show that through our actions. Whether it's me or anyone ever taking this head coaching job at FC Dallas - that is something that is never going to be compromised. That's a must and something that is going to be done with a lot of pride and a lot of joy.

ASN: With regards to the Bayern Munich partnership, when I interviewed Thomas Roberts and Chris Richards this past year, both said the partnership was on their mind and was a factor when signing with Dallas knowing they might have the opportunity to go over there and train or go on loan. How important is that partnership to you? What does it mean to the young players? What is Bayern going to send in return?

Gonzalez: The Bayern partnership is a player-pathway partnership. They will be sending their second team over here in January for a mini-preseason and they are going to be playing some friendlies against our first team and second team. That is going to help with integration and strengthen the relationship.

The partnership has been very beneficial for us to connect with a club in Europe and learn about their methodology and their business model and how they do things in their departments. It can help us learn to be the best we can be with our resources. At the end of the day, the core of the relationship is talent. They believe we have the talent coming through our academy that interests them for their program.

As a first team coach, I ideally want and would love that every player in our youth system and academy would want to play for me and my staff at the first team level here. But if the player here has the attention overseas and club here has the opportunity to get a return on investment or to support a player in their best interests because they have a value that can help monetize our academy or help monetize our first team, then I am 100% behind that. If that means losing a player and they won't be able to perform in our stadium but we gain value out of it, then I think it is a win-win. We are on board with that philosophy and having this partnership with Bayern has been fantastic - making us more global because the game is global.

ASN: When Don Garber said at the state of the league that he wanted the club to be more of a selling league, do you think that resonates with young players in your pipeline?

Gonzalez: Absolutely. I think we all have to some sort of a mindset for being a selling club. Some clubs are more buying than selling but we all have to have percentage of our philosophy that is catered or focused on selling. Because if not, then we're only depending on income from fanbase or TV rights and sponsorships. The reality of this business, whether you are here or in Europe, clubs have to have a sector of their business that is focused on selling. Some will do better than others but for us, it's a priority. Don Garber is accurate.

ASN: At FC Dallas, you have probably spoken to a lot of young players that are at a crossroads when determining where to sign their first professional contract. You've signed some promising talent but also painfully lost Weston McKennie for free after eight years in the academy and he is starting for a Champions League club just over a year later. What goes through their minds when signing a deal and what did the club and league learn from the Weston McKennie situation?

Gonzalez: For me, like anything in life, sometimes you have to take a step back to take three forward. That's in the case of Weston who is doing quite well and we wish him well and love him. That situation was not a great business situation for us and what we're trying to do. Not just for FC Dallas but the whole league as learned. I think that is why it is so important to have good relationships with the channels in Europe.

In terms of solidarity payments, that is something that is just not clear here yet. For me, those kind of things can't continue to happen. But if the clubs have good relationships overseas and the clubs can develop emotional connections with players and their families and do it in a way that is natural and mutual, then the play feels emotionally invested in the club and the club feels invested in them, then there is going to be solutions for them. That doesn't mean they can't play at Schalke one day or play at Bayern one day or they can't play in a World Cup.

When we look at a parent or a player who tell us that their ultimate goal is to play in a World Cup or the Champions League, now we can really look them in the eye and say: ‘guess what? That’s our ultimate goal for you too and we can do that together.’

As our league grows and keeps taking its next steps, there are more players in Europe and South America who want to come here than ever before because of the quality, the fanbase, the coaching, the resources. I think MLS knows that is step by step process.

Gonzalez: I respect all other philosophies and I don’t think there is one way to do things and there are different ways to work. I respect them all. I really can’t wait to start working on the field and stop talking. I want to start showing it through example. But to answer the question in the best way I can, we want to know how to do all styles and know when to use them.