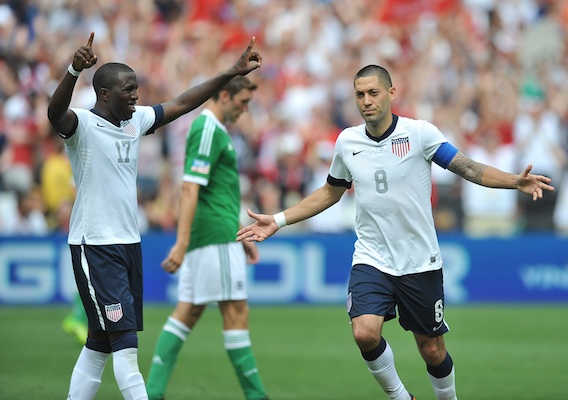 Goals of the Year

American players scored some very impressive goals this year for both club and country, and ASN contributing editor Brian Sciaretta has selected the 10 best of 2013—with videos of each.
BY Brian Sciaretta Posted
December 29, 2013
8:08 AM

August 14, 2013
The August friendly against Bosnia-Herzegovina was one of Altidore’s best games ever for the U..S national team. He had a hand in all four U.S. goals in the 4-3 victory—a hat trick and an assistin. His stunning free kick in the 84th minute gave the Americans a lead it would not relinquish.

October 27, 2013
Roma are one of the best teams in Italy this season and Michael Bradley has to fight hard to earn playing time. In October, Bradley hit a late winner to give Roma a 1-0 win on the road over Udinese. While it was an important goal, it also took a lot of skill to execute. On the play, he made a run up the middle and hit a well-taken shot from outside the 18 with his first touch.

November 30, 2013
Jermaine Jones does not score many goals, but his strike against Stuttgart in November was a beauty. Schalke were winning 2-0 at the time and Jones hit a powerful shot from distance with his second touch, beating the keeper just inside the left post.

June 2, 2013
On June 2, U.S Soccer celebrated its centennial with a friendly against Germany. It wasn’t the strongest German team ever assembled but it was still a team that consisted of above average Bundesliga players and was a good test for the Yanks. In the 64th minute the U.S. captain made a nice move in the midfield to get open for the shot and unleashed an unstoppable left-footed laser from 25 yards. The goal gave the U.S a 4-1 lead at the time and proved to be the difference in a 4-3 win.

August 17, 2013
This past years was something of a mixed bag for Juan Agudelo. He struggled to get healthy but after a midseason trade to New England he reminded everyone why he is a highly rated prospect. (A failed move to Stoke City undermined some of the momentum he had established, however.) Despite ending the year on a low point, his 54th-minute goal against Chicago in August was one of the best goals in MLS this season. With the keeper closing in, the only way Agudelo could score was for him to hit a very difficult chip with the outside of his shoe off a volley. So that's what he did.

November 24, 2013
The final of the Norwegian Cup this year between Rosenborg and Molde was a very entertaining game that featured end-to-end action. Molde eventually won 4-2 but U.S. international Mix Diskerud delivered the best goal of the contest for Rosenborg. In the 17th minute Diskerud demonstrated some skillful dribbling to get open and hit a well-placed right-footed shot into the top corner of the net.

September 29, 2013
After coming up through the youth teams of Estudiantes de la Plata, California native Kevin Hoyos, 20, went on loan to Victoria in Honduras to get first-team minutes. The loan proved to be successful and he scored six goals in 12 games. Hoyos was on top of his game against Desportes Savio in September when he had two goals in a 4-3 win. His second strike came in dramatic fashion in second-half stoppage time with the score tied at 3-3. A defender for Victoria hit a long ball up the field that Hoyos let bounce. He then hit an incredible bicycle kick past the keeper for the winner (his goal is at 1:50 of this clip below). It was a rare combination of high-level skill and athleticism. Hoyos is not well known by American fans but if goals like this are any indication, we haven’t seen the last of him.

April 26, 2013
Altidore’s 31 goals in the 2012-13 season set a record for Americans playing in Europe, and his free kick goal against Heerenveen in April was one of his best. It capped off the scoring in a 4-0 win and showed a side to his game that doesn't receive enough attention.

September 28, 2013
Christmas came early in August for Jurgen Klinsmann and the U.S. national team when Aron Johannsson decided to play for the United States over Iceland. He is a striker that can score goals is so many different ways that he is a nightmare for defenders. His goal against PSV Eindhoven in September was special. On a broken play where PSV was unable to make a quality clearance, Johannsson ran onto a bouncing ball and hit a powerful high shot that dipped over the keeper and into the net. It was sensational shot that really showcased what Johannsson can do. Even better—it proved to be the game winner as AZ in prevailed, 2-1.

November 3, 2013 Every now and then, an incredible goal comes out of nowhere from an unlikely player. Sean Franklin’s golazo against Real Salt Lake in first leg of Major League Soccer's Western Conference Finals was exactly that. With the game scoreless in the second half, Franklin’s 48th-minute strike was all the Galaxy needed to secure a 1-0 win. Franklin is not known for being an offensive threat but this goal was perfection. He stepped up and hit Robbie Keane’s pass with incredible power and swerve. There was nothing Nick Rimando could do about it. Franklin may never hit a shot that well again, but this is one to be seen and cherished. OK, now it's your turn to chime in. Which of these is your favorite? Did Brian leave your favorite U.S. player goal out of his list? Share your take below?