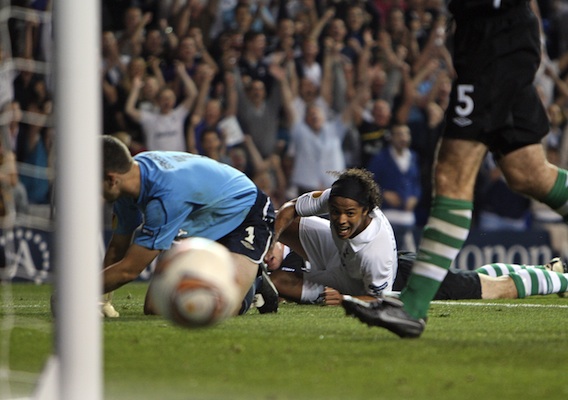 The Mexican attack continues to come together as members of El Tri show their stuff around the world. Elsewhere, we have a Yairo Yau sighting Down Under. Jon Arnold finds that and more.
BY Jon Arnold Posted
January 23, 2013
10:22 AM
Much like the USMNT, much of the talent on the teams they’ll face in the Hex plays for top European clubs. Each week, we’ll take a look at how several players performed. The list isn’t all-inclusive, but seeks to include all players who American fans could see square off against the USMNT.

The Panamanian Yairo Yau came on in the 64th minute and scored for Sydney FC but was overshadowed by Alessandro Del Piero scoring four in a 7-1 win against Wellington Phoenix (featuring American Alex Smith). Gio dos Santos scored for Mallorca in a 3-2 loss to Español. Hector Moreno seemed to forget he and Gio weren’t playing for El Tri, but on opposite teams. He headed a ball back to Gio who was immediately in on goal.
Español 3 Mallorca 2 by jordixana Carlos Vela and Real Sociedad pulled off a shock upset of Barcelona. The Mexican striker didn’t score, but he did get an assist.

Costa Rica: Joel Campbell had another good start for Real Betis, playing 90 minutes. He drew a yellow card in a match that saw seven of them. Fulham got 90 minutes from Bryan Ruiz, but he was mostly quiet in a 2-0 loss to Manchester City. Bryan Oviedo was again an unused substitute for Everton in their scoreless draw with Southampton. Keylor Navas was Levante’s backup keeper. Gilberto Martínez was on the bench for Lecce in a 3-1 loss to San Marino. Honduras: After scoring last week for the first time in more than a year, Carlo Costly followed up with a two-goal performance in a Greek Cup match. He also played all 90 minutes of Veria’s league match Monday, a 2-1 loss to Levadiakos. Roger Espinoza made his Wigan debut in a 1-0 FA Cup victory. He was named the man of the match in a fan poll, but there was a lot of influence from Honduran voters and Sporting Kansas City fans supporting their guy. He made his league debut as a second half sub in the team’s loss to Sunderland. Maynor Figueroa went the full 90 in both Wigan matches, manning the left back spot. Emilio Izaguirre and Celtic had a pretty great week. It started with a friendly victory against Steaua Bucharest, then Celtic moved back into league play where they hung four on both Hearts and Dundee United. Izaguirre played the entire league matches and made a cameo in the friendly. Snow denied Andy Najar a potential Anderlecht debut with their match postponed because of weather. DC United rejected an Anderlecht bid for the player. Jorge Claros went the full 90 for Hibernian in a 1-1 draw with Dundee FC. As rumblings continue that Wilson Palacios is headed to QPR, he made the bench for Stoke against Norwich. Anthony Lozano and Valencia B notched a 2-0 win. Jamaica: Adrian Mariappa and Jobi McAnuff played the full 90 for Reading during their win against Newscastle. Garath McCleary started and came out in the 64th minute. Nyron Noseworthy played all of Watford’s 4-0 win against Huddersfield. That puts them in the playoff spots. Dane Richards was not in the Burnley team when they beat Millwall. Rodolph Austin went the full 90 as Leeds beat Bristol City, 1-0. Omar Daley was an unused substitute for Motherwell in a 3-2 win against St. Johnstone. Teammate Chris Humphrey wasn’t in the team. Ricardo Fuller did not appear for Charlton. Marlon King came on in the 70th minute for Birmingham City. The Blues had a last-minute equalizer for a 2-2 draw against Brighton. Nathan Smith and Chesterfield were snowed out. Last week, I told you that Keammar Daley did not appear for Preston North End. That’s because he was released January 13. We’ll keep you updated on the young forward’s progress. Mexico: Guillermo Ochoa might be on the move in the summer, with the president of the club saying several clubs have inquired. Rumors have the keeper headed to Liverpool. He played very well for Ajaccio on the weekend, making several point blank saves. Ochoa’s teammate Adrian Mutu scored for Ajaccio but also attempted a panenka and missed. The match ended 1-1. Andres Guardado had a forgettable week. While his countryman Vela was helping to key an upset of one of La Liga’s giants, Guardado and Valencia got thumped 5-0 by the other, Real Madrid. Former Mexico manager Javier Aguirre didn’t call Hector Moreno’s number for Espanyol. Chicharito was an unused sub for Manchester United in their 1-1 draw with Tottenham. He hasn’t appeared since January 5. Whose performance strikes the most fear in your heart? Have we missed any players who you think should be in the U.S.’ game-tape rotation? Let us know below. Jon Arnold (@ArnoldcommaJon) is ASN's CONCACAF correspondent.