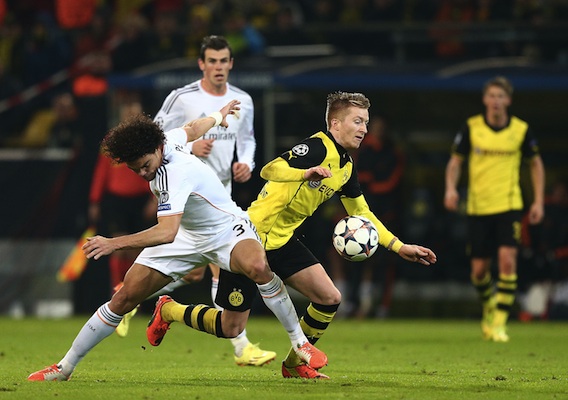 Klinsi, Berti, and Andy are prepared for Group G—are you? Read Blake Thomsen's recurring Group G Watch series and you won't be surprised by what you see in Natal, Recife, and Manaus.
BY Blake Thomsen Posted
April 11, 2014
1:49 PM
AS USUAL, AMERICAN SOCCER NOW brings you all the noteworthy performances from Group G players from the past week. We add a new wrinkle at the end, however, with projected Starting XIs for each Group G team as well. Dig in, soccer obsessives—this is what you're hungry for.

Germany’s Marco Reus appears to be activating his Ronaldo mode as the World Cup approaches. He turned in a hugely impressive display against Real Madrid in the Champions League quarterfinals, scoring twice and terrorizing the Real Madrid backline throughout. Here’s an individual highlight video from the game, with the goals at the 1:25 and 3:00 marks. Reus also had a goal and assist over the weekend against Wolfsburg, to go with his hat trick in the previous weekend’s match. Needless to say he is in brand. (That’s German for “on fire,” according to Google Translate.) As Reus was lighting up Real on Tuesday night, fellow countryman and left wing competitor Andre Schurrle was doing the same to PSG over at Stamford Bridge. Schurrle’s goal gave Chelsea the belief to push on and claim a dramatic victory over the French giants. With both Schurrle and Reus in such electric form, the battle for the German left midfield spot will be a fascinating one leading up to the World Cup. In order to keep up with his international teammates, Thomas Muller decided to score a Champions League goal of his own, dooming Manchester United with a typically opportunistic goal. While the Germans were scoring in bunches, Cristiano Ronaldo was forced to sit out the Real-Dortmund match due to a minor hamstring complaint. He may miss another match or so, but the injury is not nearly serious enough to keep Ronaldotron out for long.

After a lengthy knee injury and ensuing goal drought, Ghana’s Andre Ayew announced his return in a big way with a clinical hat trick in Marseilles’ 3-1 win over Ajaccio. Ayew’s prospects of starting in Brazil may have been slipping, but this performance should put him back in the driver’s seat ahead of Chelsea loanee Christian Atsu.

No goals or assists to report in this space, but Germany’s two Serie A strikers—Miroslav Klose and Mario Gomez—are both facing moderately severe injuries. Both may not return until May, which will make their respective fights to make the World Cup roster a bit more difficult.

Starting now and continuing through the World Cup, we’ll use this space to take our best shot at predicting the Starting XI for each of the U.S.’s Group G opponents. Think we're on target? Off base? We want to hear, so tell us in the Comments.

With all of its quality, Germany has all kinds of potential lineup permutations. Joachim Low will likely run a 4-2-3-1, but he has also sometimes run a Spain-inspired 4-6-0 given the lack of fit and in-form strikers. Here’s our best guess as of mid-April, with explanations for our less confident projections. Goalkeeper: Manuel Neuer
Right back: Philipp Lahm
Center back: Mats Hummels
Center back: Jerome Boateng: Boateng is prone to the occasional error, but chief competitor Per Mertesacker has had enough tough games for Arsenal recently to give Boateng the slight edge for now.
Left back: Marcell Schmelzer: The Dortmund man is by no means a lock, but he gives the Germans better balance than they’d have if Joachim Low deployed a center back in this spot.
Center midfield: Bastian Schweinsteiger
Center midfield: Toni Kroos: Kroos has been starting alongside Schweinsteiger in the middle of the Bayern midfield recently, and that could very well continue in Brazil. Watch this space for news on the return to fitness of Sami Khedira, who’d have the inside track to start but is facing a race against the clock to recover from a torn ACL.
Right midfield: Thomas Muller
Center attacking midfield: Mario Gotze: The Bayern playmaker is probably a lock to be on the pitch, but he’ll face competition for this position from Mesut Ozil. Ozil would have been listed as a lock at any point in 2013, but injury problems and questionable form for Arsenal have called his starting spot into question.
Left midfield: Marco Reus: The German left midfield spot is one of the most loaded in all of world soccer. We’ll give the inside track to Reus for now, but Andre Schurrle, Lukas Podolski, and even Julian Draxler will push him all the way. It’s also very possible that this spot could be rotated throughout the tournament.
Striker: Lukas Podolski: This is the shakiest projection of all, as no one (including Joachim Low) has any clue who will start up top for Germany, or if they’ll even play a striker at all. We’ll give Podolski the edge for now, given his moderate success for Arsenal this season and the surprising lack of alternatives. If Mesut Ozil returns to form for Arsenal before the season ends, Germany could easily play Gotze as a false nine and Ozil in the attacking midfield spot, consigning Podolski to the bench.

Portugal has one of the most established sides in all of world soccer, with the combination of excellent first-team players and limited depth making the team sheet highly predictable. Goalkeeper: Rui Patricio
Right back: Joao Pereira
Center back: Pepe
Center back: Bruno Alves
Left back: Fabio Coentrao
Center defensive mid: Miguel Veloso
Right center mid: Raul Meireles
Left center mid: Joao Moutinho
Left wing: Cristiano Ronaldo
Striker: Hugo Almeida: Besiktas’ Helder Postiga has a chance to play in this spot, but Almeida certainly has the inside track.
Right wing: Nani: The enigmatic Manchester United man only recently returned to the Manchester United matchday squad, so he’ll need to establish himself with United to guarantee his place above the likes of Silvestre Varela and perhaps Danny.

Like Portugal, Ghana’s starting XI is more settled than most. However, a few young upstarts may push the established old guard for places in Brazil. Goalkeeper: Abdul Fatau Dauda
Right back: Jerry Akaminko
Center back: Samuel Inkoom
Center back: Daniel Opare
Left back: Rashid Samaila
Defensive midfield: Michael Essien: Essien is a Ghanaian legend, but he’s advancing in years and can’t be too far ahead of Udinese’s Emmanuel Agyemang-Badu at this point.
Defensive midfield: Sulley Muntari
Center midfield: Kevin-Prince Boateng
Right wing: Andre Ayew: Right when Vitesse’s Christian Atsu looked like the favorite to start in this spot, Ayew responded with a hat trick for Marseilles this past weekend. After going months without scoring, that performance may be enough to keep Ayew in his usual starting role heading into the World Cup.
Striker: Asamoah Gyan
Left wing: Kwadwo Asamoah What do you think about these Projected Starting XIs? And Group G in general? Where are each team’s biggest strengths and biggest weaknesses? Blake Thomsen is a frequent ASN contributor. Follow him on Twitter.