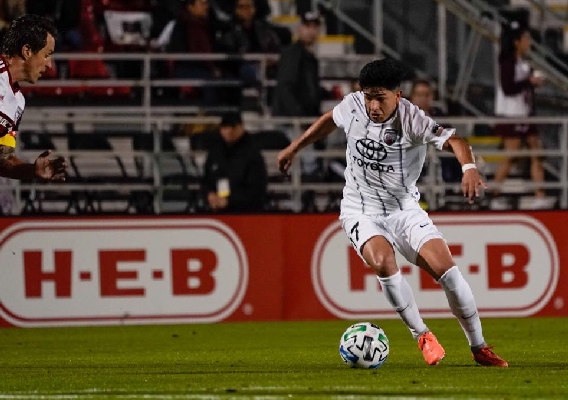 Gallegos holds ambitious future with San Antonio, the U-20s, and beyond

Whenever the USL restarts play, one of the most intriguing players to watch will be Jose Gallegos. The talented teenager is one of the league's best young players and he hopes to lead his club to silverware while also building a case for a future on the game's biggest stages.
BY Brian Sciaretta Posted
April 20, 2020
10:00 PM

IT GOES WITHOUT saying that the current shutdown for sports has effect players at every level across the globe. Among those hit the hardest are the young players, both in the United States and abroad, who were looking to breakout inside of the next few months but will now have to put their careers on hold.

Jose Gallegos, 18, certainly falls into this category as the San Antonio FC teenager was one of the most eagerly anticipated teenagers in the second-tier USL Championship. As a local player, Gallegos was a product of the team’s academy and broke into the first team last season on a USL Academy player agreement where he notched a goal and an assist in roughly 600 minutes across 14 games.

But the USL offseason was a pivotal time for Gallegos. He had an offer from NC State but instead opted to sign a multiyear deal with San Antonio.

“I've known the coaches for a really long time,” Gallegos told ASN of his decision. “There're people I really trust. I wouldn't say it was an easy decision as well, because, you're passing up on an opportunity. I was committed NC State, and to pass up on that opportunity, it was something my parents always saw me. We came to the conclusion that this was the best for the situation I was in and for my future.”

Now as a full professional, Gallegos began the season in fine form. He scored three goals in three preseason games. In the season opener, Gallegos played a full 90 in a 1-0 win over reigning USL champion Real Monarchs where he showed impressive skill in the build-up to the winning goal.

But after that win, Gallegos and San Antonio had its season put on hold due to the global COVID-19 pandemic. Instead of continuing his breakout, Gallegos now trains at home, works on fitness programs assigned to him from the team, and attends daily team meetings online.

But this past year he has been juggling the responsibilities of being both a full-time professional player and a full-time student as he finishes his final year of high school at Catholic Central.

“I knew was going to be difficult, but I made this decision for a reason and I just had to get used to it,” Gallegos said. “The first couple of days of it were a little hard but after two weeks or so, it wasn't a problem. Right after training, I've had maybe an hour to change, eat, and then head over to school.”

JOSE GALLEGOS FOR OUR CITY!!! First professional goal in the books and the good guys take the lead! ?? #Defend210 pic.twitter.com/eZM87yIWop

Family has always been important Gallegos who lists his two biggest inspirations in the sport as Brazilian legend Ronaldinho but also his brother who was talented but tore his ACL twice and could no longer player. Seeing this made the younger Gallegos value his own career and put an emphasis on fitness and injury prevention techniques that coaches give him.

Whenever or if the season resumes, Gallegos will return to San Antonio where he will hope to have the team contend for a USL title. Unlike last year, the right-footed Gallegos is expected to be a regular starter. As a versatile player, he can play on either wing and this preseason he even experimented at the center-forward spot, but he still insists his best position is the number 10 role.

It has been difficult for teams in MLS and in USL to produce players in the No. 10 role and typically that position has been filled by foreign imports. But San Antonio FC believes Gallegos is different.

“You have to start off with the essential traits - which he demonstrates daily,” San Antonio head coach Alen Marcina said. “For me, this is what separates him apart from many others. He's always applying maximum effort in all the tasks of him. He embraces challenges no matter how great. He's consistently seeking opportunities to learn and grow - which is rare at such a young age. He's also very humble - family oriented and has a team-first mentality. The piece we are excited about is that he exudes confidence through his actions on the field, not through words. He's also very committed to executing tasks on both sides of the ball. For an attacking player, to see that level of commitment in defensive moments is something we see as a great trait.”

But there are also long-term goals that Gallegos and San Antonio FC have for his career and the two biggest are earning international call-ups and also earning an eventual transfer to Europe.

Gallegos as never been called up to a youth national team at any level and is eligible for both the United States and Mexico – although ASN was able to independently confirm that Gallegos would have been on the roster for the cancelled U.S. U-20 camp in March where the team would have faced Portugal and France.

Like many Mexican-Americans of his generation, Gallegos admits that the Mexican national team had a big presence in his household but it was a big event for his family whenever Mexico would play the United States and the household would be divided.

“There would always be someone on the U.S. team's side, someone on Mexico's side, and it was always good to see those games because they always get really exciting,” Gallegos said. “My mom and my dad are obviously huge Mexican team fans but my brothers always told me the US is looking like its coming out. But I feel whatever opportunity comes to me and I feel like it's the one I want to make. I'll choose that.”

As for a move abroad, San Antonio FC is well aware that they have a player who has a high enough ceiling to move to the bigger leagues in Europe. Part of the plan in signing Gallegos to a longer-team deal was to further his development to the point where he could make that jump whenever he is ready.

“As a club, we are committed to the development, integration, opportunity, and also progressing players,” Marcinda said. “Jose, for me personally, demonstrates the attitude, the traits, behaviors needed to contribute, perform, at the USL level and also has undeniable potential of playing at the highest level of the game. For us as a club we are hopeful people, nationally and internationally, are going to be paying close tabs on Jose... We are excited to be a part of that process for Jose.”

For Gallegos, he doesn’t hide his ambitions but he also stresses that San Antonio is a great place for him at the moment as it is his local club which he supported before joining. He also points to other young players like Tyler Adams, Alex Mendez, and Uly Llanez who all played in the league as teenagers before making the jump.

Regardless of whenever he makes that move, he will carry San Antonio wherever he goes.

“The overall goal is to go to Europe,” Gallegos said. “But I felt that I would stay local for a bit, work hard here, and see was what the future holds. I'm blessed to be in the position I am in now - seeing players like Christian Pulisic, McKennie -  great players like that who eventually made that transfer to Europe and to Germany. To do as well as they're doing is an inspiration to all young players like us - aspiring to one day be there. I'm just doing my best to work hard here and follow in their footsteps.”

“I was I was born and raised in San Antonio,” he added. “And to eventually sign for the team I support for the longest time is a dream come true. And to carry that on with me to wherever I go is a huge pleasure of mine.”