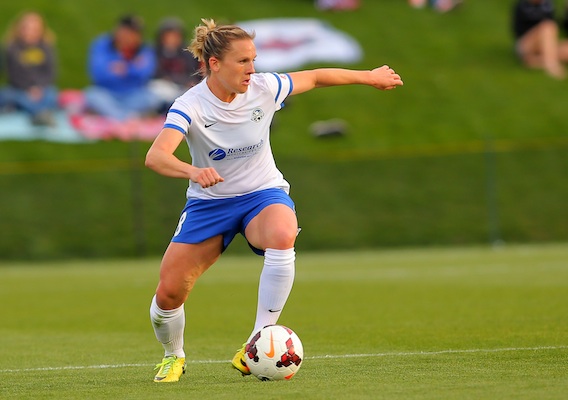 From the NWSL to Europe: Top U.S. Women in Action

American Soccer Now columnist John D. Halloran looks back at the first two weeks of the NWSL season, and casts his gaze across the Atlantic for updates on a few Yanks playing in Europe.
BY John D. Halloran Posted
April 21, 2014
2:51 PM
WITH THE UNITED STATES women's national team on hiatus until early May, attention on the American women has now shifted to their club play. The second season of the National Women's Soccer League is off and running and several key Americans are playing abroad. Here's a recap of the action from the last two weeks.

Amy Rodriguez is off to a hot start in the NWSL, scoring two goals in her first two games. On Saturday, Rodriguez scored (2:27 mark of the video) in FC Kansas City's 3-1 loss to the Washington Spirit. Other notable performances from U.S. women in the match included an outstanding game from Ashlyn Harris, who finished with eight saves—including a penalty save on fellow U.S. international Lauren Holiday (1:15 mark of the video). Finally, Crystal Dunn picked up an assist on Washington's gamewinner (at the 3:12 mark of the video). Heather O'Reilly picked up a goal (at the 10:24 mark) and an assist (at the 1:39:32 mark) in the Boston Breaker's 3-2 loss to Houston. The win for Houston—an expansion team—marked the first victory in the history of the Dash franchise. The Chicago Red Stars beat the Western New York Flash 1-0 with two former U.S. U-20's involved on the winner for Chicago. Julie Johnston scored (at the 1:15:50 mark) a header on a corner service from Vanessa DiBernardo. Both women represented the U.S. in the U-20 World Cup in 2012. The U.S. won the U-20 World Cup that year with Johnston captaining the squad. Finally, current U.S. senior team captain Christie Rampone also got in on the goal-scoring action (at the 57:40 mark) in Sky Blue FC's 1-1 draw with the Portland Thorns. It was the first-ever career goal for Rampone.

Back in Week One

Both Amy Rodriguez and Megan Rapinoe scored in Week One of NWSL action. Rodriguez' goal (at the 1:59 mark) was assisted by former U.S. U-20 Kassey Kallman in a 1-1 draw with Sky Blue FC. Rapinoe's goal (at the 4:47 mark) came in a 3-0 Seattle Reign win over the Boston Breakers. Rapinoe's tally came only after she hit the woodwork three times earlier in the match.

The American contingent at Tyreso continued their run in the UEFA Champions League with a scoreless draw against Birmingham City in the first leg of the semifinals. Tyreso will host Birmingham in the all-important second leg next Sunday with a place in the finals on the line. In the first leg, Americans Whitney Engen, Christen Press, and Meghan Klingenberg all started and went the distance. American forward Sarah Hagen, who plays for Bayern Munich, underwent hand surgery this week. (Warning before you click: the picture is not for the faint of heart.)

Had surgery on Tuesday to fix my broken hand. Hopefully I'm back in a few weeks! http://t.co/IbToyKHfo0

On the Trainer's Table

Several prominent Americans weren't in action due to injury. Both Abby Wambach and Rachel Van Hollebeke suffered injuries in the last U.S. friendly against China: Wambach fractured her orbital bone and Van Hollebeke hurt her ankle.

You never know how much you take for grated your eye sight. All is good though and I'm gonna have a solid shiner!! pic.twitter.com/TWH53GA6FJ