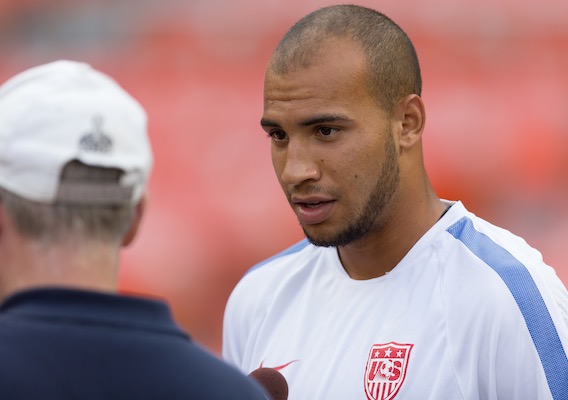 From Boyd to Brooks to Saief, Lots of U.S. Updates

Might there be a new attacker joining the U.S. fold? Will John Brooks be on the move in the near future? And what's the latest on fan favorite Terrence Boy? Brian Sciaretta has you covered.
BY Brian Sciaretta Posted
December 11, 2015
1:10 PM

IT HAS BEEN a busy stretch for American players, and not just in MLS. Here’s my take on the top stories involving U.S. players plying their trade in Europe and Mexico.

Kenny Saief to play for U.S.?

On Thursday a report surfaced from Israel’s Sport5 that KAA Gent forward/winger Kenny Saief may be receiving a call-up in the near future from the United States men's national team. The report included quotes from Saief, who said he was no longer appreciated by the Israel program but was impressed with what he had seen from U.S. Soccer.

For those unfamiliar with Saief, I interviewed him in 2014, and he has an interesting story. He was born in Florida to Israeli parents but moved to Israel when he was 6; not Jewish, he grew up in the minority community that practices the Druze faith.

After growing up playing with Israeli youth national teams, in 2014 he transferred to KAA Belgium, and this year he has appeared in 11 games (8 starts) and scored two goals. Just this year he has played in five Champions League games (4 starts) and helped Gent qualify for the knockout stage.

There are very few Americans at the moment who play Champions League soccer, making Saief a welcome addition. Next week he will turn 22, making him eligible also for the U.S. U-23 team.

I texted with Saief today, and while he stressed that he has not yet been called up, regarding U.S. Soccer he said that he “knows for a fact they have been scouting me.”

His willingness to consider playing for the United States comes in stark contrast to comments he made in February following the death of his father. Then, he told an Israeli publication on playing for the U.S. team: “When I had [a U.S.] offer, Dad insisted that I think about it and wait patiently for me to prove myself in order to get invited to the Israeli team. He said that is where I belong and that is what I did. He asked and I do not regret it.”

On Tuesday, Fabian Johnson’s incredible run continued when he picked up a very impressive assist for Borussia Monchengladbach in a 4-2 loss to Manchester City. While Gladbach was eliminated from the Champions League with the result, Johnson continued to show he’s one of the hottest players in Germany.

In fact, it’s hard to recall another American who has had a better four- to five-week run at the club level than the one Johnson’s had since scoring a goal against Juventus on Nov. 3.

During that run he has goals against Juventus, Sevilla Bayern Munich, and Hoffenheim (twice). He’s scored four goals and notched an assist in his past four games.

On Wednesday, Julian Green made a surprise start for Bayern Munich’s first team in a 2-0 Champions League win over Dinamo Zagreb. This does not mean that Green, 20, is necessarily closing in on first-team minutes on a regular basis for Bayern, which had already secured first place in the group. But what’s the angle? Is Bayern beefing his résumé in the hopes of selling or loaning him? Or is he quietly climbing the ladder?

Green’s performance was pretty average on the day, as he was not involved in anything dangerous, but he did not make any noticeable mistakes, either, before being removed in the 63rd minute.

Ethan Horvath, 20, has been one of the fastest-rising Americans playing abroad in 2015 after claiming the top goalkeeping spot at Molde. His play in the Norwegian league was solid, but what really made him stand out has been his Europa League performance.

On Wednesday he went the distance in a 1-1 draw against Ajax as Molde claimed the top spot in its group and advanced to the knockout rounds. Don’t be surprised if Horvath’s name is on the January-camp roster for the United States national team.

Meanwhile Cameron Carter-Vickers, still only 17, made the bench for Tottenham’s first team in a Europa League win over Monaco on Thursday. Even though he was an unused substitute in the win, the game marked his first time making the bench for the Premier League team. As in Bayern’s case in the Champions League, Tottenham had clinched first place in its group before the match, but it nonetheless was a rewarding moment for the teenager who had a stellar U-20 World Cup and has since moved on to the U-23 team.

It has been a big year for Carter-Vickers; all eyes will be on him in 2016 as he looks to take the next step.

John Brooks on the market?

One American player who could be hitting the market soon is national team center back John Brooks, who has been playing well for Hertha Berlin recently. He’s been playing so well, in fact, that the club has been wanting to ink the American to a long-term deal but according to a report in Germany’s Kicker Magazine negotiations have been progressing slowly.

Brooks, 22, for now has a contract with Hertha through the 2016-2017 season. Kicker reports that if a deal is not reached by Christmas, Brooks might be shopped in the transfer window, as soon as January.

Perhaps a big reason for the slow negotiations? Brooks has had three different agents since 2014.

The Portland Timbers were crowned champions less than a week ago, and already they have a hole to fill: Left back Jorge Villafana, one of the team’s sturdiest and most dependable players in 2015 (3,700 minutes), is off to Liga MX club Santos Laguna, which made an offer of around $1 million. Santos Laguna announced the transfer on Tuesday.

Villafana, 26, was considered to be a contender to be part of the U.S. national team’s January camp, but now his international debut will likely have to wait. The Anaheim native has previously played with U.S. youth national teams.

Terrence Boyd still on the mend

The news has been dismal these days for American forward Terrence Boyd, who transferred to RB Leipzig in 2014 but never really had a chance to play with his club because of injuries. Monday marked the one-year anniversary since his ACL tear, and Boyd has had a nightmare trying to recover.

In an interview with German media, Boyd revealed that he still cannot train intensively. He added that he hoped he could test the knee more aggressively in January, with a return to the field in March in the best-case scenario. The worst would be yet another lost season.

Soccer or no soccer, though, Boyd has no intention in disappearing from the spotlight: Away from rehabbing his knee, he is now studying sports media and communications. A future press officer, maybe?

It can be tough to keep track of Americans in Mexico these days, as many players — such as Edgar Castillo — move endlessly from team to team. Over the summer Greg Garza was loaned from Club Tijuana to Atlas, but his playing time there was cut short because of a hip injury, from which he is still recovering.

But the 24-year-old from Dallas has now returned to Club Tijuana. He will begin playing again for the club as soon as he is healthy.