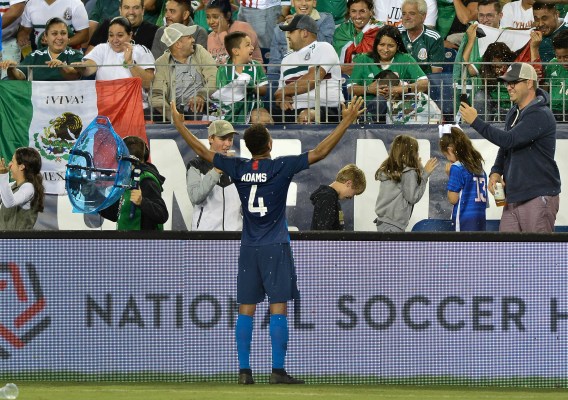 Formations, leadership, & identity: thoughts on the USMNT win over Mexico

The United States national team defeated Mexico 1-0 in Nashville, and there was a lot to take away - from an ugly start to a nice finish. Brian Sciaretta thought a lot about this game in big picture and here are his thoughts.
BY Brian Sciaretta Posted
September 12, 2018
5:00 AM
ON TUESDAY night in Nashville, the United States national team defeated Mexico in a game that was technically a friendly – but was anything but. As is typical whenever these rivals meet, it wasn’t pretty but it was intense and chippy.

United States started in a weird formation that was emblematic of problems dating back to the Klinsmann-era where players were asked to do roles that don’t fit their strengths. In a five-man midfield, four players who fluctuate between the No.6 and No. 8 positions all started along with Tim Weah, who normally plays as a central forward, as a winger.

Sarachan also went with backup fullbacks Eric Lichaj and Shaq Moore – which is fine for a friendly because squad rotation is important. But Lichaj’s lack of a strong left foot combined with no true wingers hurt the U.S. team on the left flank. Meanwhile, Moore was not nearly as strong getting forward as DeAndre Yedlin.

The result was predictable in that it was disjointed. Gyasi Zardes was isolated up front and couldn’t get involved. The midfield was not successful pushing the ball into the attack. There was a glaring hole linking the midfield to the attack.

When Weston McKennie had to be replaced due to an injury, Sarachan put Green into the game to play as a withdrawn forward and/or a number 10. From that moment, everything started to work a lot better for the U.S. team. Even before the red card, the U.S. team was starting to take the game to Mexico.

The rest is history. Matt Miazga got into Mexico’s heads and El Tri was reduced to 10 players soon after. Tyler Adams then scored the game’s only goal with a well-timed run into the box to finish a terrific pass from Antonee Robinson.


Without question, the first two substitutions won the game for the United States. Even before the red card, the U.S. team looked a lot better once Julian Green came into the game. When Robinson came in, the team was finally able to have an attacking presence from wide positions – which is how they scored.

If there is anything to take away from this game, it’s that there might be a way for the U.S. team to play without Pulisic. Pulisic typically has a lot of freedom to create and attack whenever he’s playing for the U.S. team and when he isn’t able to play, there has to be an entirely different way to attack. Can Green be Pulisic’s backup? Perhaps Sebastian Lleget can serve that role too?

There isn’t anyone who can play Pulisic’s role at his level, but perhaps the whole team doesn’t haven’t to change a style whenever the Hershey native isn’t on the field. Green isn’t really a winger, despite having played there a lot for the U.S. team. He was in a comfortable role against Mexico – and it showed.

For Robinson, it was an impressive rebound performance after struggling at times against Brazil. That is something that Sarachan wanted to see.

“With Antonee, I was quick to pull him aside after that game against Brazil because I know everybody was pretty harsh on him but he had some pretty good moments in that game and people remember the moment that wasn't so good,” Sarachan said. “That's going to happen with every player but with him, he still has an inner confidence and you can see it. He even made a few mistakes tonight, but generally very good. As an athlete, you want to get back on the horse after you've been knocked off. I thought he did great.”


If you missed Matt Miazga’s dress down of Diego Lainez last night, don’t worry. For the next 20 years, you’ll be seeing it as part of the previews whenever these teams play.

What happens is obvious. In the 65th minute, there was a ball played deep into the U.S. half. Miazga won control of it and Lainez fouled the New Jersey native. The two started to scuffle and then the tall Miazga made fun of the diminutive height of Lainez.

Miazga’s actions got into the heads of Mexico, and Mexico lost control of its game plan for seven critical minutes that followed. Shortly after that, Angel Zaldivar was shown a red card for a foul on Wil Trapp. Adams’ goal then came in the 71st minute.

This is sports and the nature of high level competition where teams try to mentally get into the heads of their opponents. It worked on this occasion. Miazga knew his team needed a spark to raise the intensity, he stood tall literally and figuratively, and took the necessary action.

The growth of Adams


Tyler Adams, 19, scored his first goal for the United States in the win over Mexico on a well-timed run into the box and finish a low cross from Antonee Robinson.

This is nothing new from Adams who makes well-timed runs for the Red Bulls on a weekly basis. His reading of the game and his ability to press, force turnovers, and get the ball quickly into the attack is well known. He also can be very dangerous on the counterattack in an open game.

But Sarachan is noticing that Adams isn’t just playing to his strengths well, he is growing into a far more complete player.

“This kid is a beast,” Sarachan said afterward. “When you look at data and you look at analytics and the volume of work he does over 90 minutes, I mean you guys on the outside see a good part of it but the data backs it up. He's a winner, this kid. I have been really pleased in terms of his growth with the ball in tight spots. We know he can run, cover ground, and win tackles. “

“But at the next level, can you do the next part and that is have a presence with the ball and pick your spots? He's getting better,” Sarchan added. “It's not perfect but I think he's shown he's emerging as a guy that everybody is starting to look up to. The game is getting crazy, Tyler was trying to calm it down. It was a real good night for him.”


Tactics, personnel, and formations aside, what was also another bit takeaway from the Mexico game is that the team played hard in a manner the older U.S. teams were known for doing.

When U.S. national team general manager Earnie Stewart spoke to the media last week in New Jersey, he spoke a lot about bringing an identity to the team that superseded things like formations and systems.

“When you look at it, it's more than a style of play/principles of play,” Stewart said. “It's an overarching view of soccer and the values we have in the United States. It's how we want to identify with the players we see on the field.”

“We believe in the United States that we're a country that is aggressive - in the right sense of the word,” Stewart continued. “That we're a little bit in your face.”

In all this talk about finding an identity for this team, it sounds like Stewart is almost describing the identity of the U.S. team during his early days as a player around the 1994 World Cup where the U.S. won games sometimes simply on willpower. The U.S. teams back then were always known for their relentless nature of how hard they played every game – it wasn’t just big games but it was every game, including friendlies. The team never took games off.

Without question, it was a hallmark of the U.S. team that American fans identified with – and it worked. The U.S. team typically always played better than the sum of its parts almost because of effort alone.

Then in 2002, it maintained that identity but was able to do more on the field with better and more skillful players like Landon Donovan, John O’Brien, Clint Mathis, Claudio Reyna, and DaMarucs Beasley.

In recent years, however, that identity was lost. After the 2014 World Cup, the team was getting pushed around by CONCACAF teams at the 2015 Gold Cup – which should have been warning signs about World Cup qualifying.

But when you listen to Stewart speak in combination with what Sarachan said after the Mexico win, it was almost as if they aren’t looking for a new team identity but rather looking for a way to reestablish an old identity that worked for a long time.

It wasn’t a pretty win against Mexico but the U.S. team rallied and grew into the match nicely. But in many ways, the lasting impression is that it was reminiscent of an older-style U.S. team. Which is a nice foundation to build a U.S. team that will likely have more talent than the early years of Stewart’s international playing career.

If anything, that has been the positive takeaway from Sarachan’s interim tenure in addition to introducing a wave of young players into the team.

“The one thing I told the group just now is that we talk a lot about the tactics and the soccer but the thing we tried to keep talking to this group about is what is the identity of this team?” Sarachan discussed after the game. “When fans watch this team, what do they come away with? We nitpick on the technical side, but we saw a team tonight that played aggressively, competed hard, and won most of their duels. So that's been a constant over the time that I've had the group and over the past two games with Brazil and Mexico. I thought tonight was a little bit better on the ball. That is still an area to improve, for sure. But it was a real collective effort from the first guy to the 22nd. As a staff, what else can you ask for?”