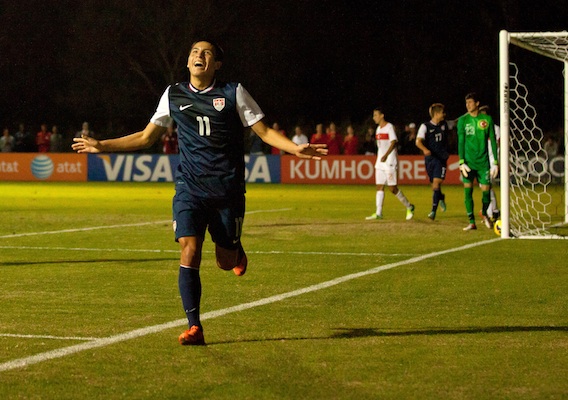 For Rubio Rubin, It's All About the Red, White & Blue

The 18-year-old attacker from Beaverton, Ore., will join the United States U-20 team in Texas for the upcoming Dallas Cup, and there is a growing buzz about this promising—and patriotic—young talent.
BY Brian Sciaretta Posted
April 10, 2014
11:45 PM
THE DALLAS CUP will get underway this weekend for the United States U-20 national team—the team’s first competition of the cycle. Head coach Tab Ramos will not have all of his players available due to club commitments, but Rubio Rubin, one of the the team’s most talented prospects, will take part. Rubin, 18, is a veteran of U.S. youth national teams and is expected to play a key role with the U-20 team this cycle. Last summer he agreed to join Eredivisie club Utrecht, where he has been training regularly since August. Due to FIFA restrictions, Rubin was not able to officially sign with the club until his 18th birthday, which arrived on March 1st. Now that the contract is signed, Utrecht can register his contract on July 1 and then Rubin will be able to play in competitive games for the club—either for the first team or its youth teams. For most of the past season, his training regimen has been intense to compensate for the lack of competitive games. He’s been training with the club’s U-19 team, its reserve team, and occasionally the first team. Despite the restrictions, he is pleased with his progress. “It’s been going well,” Rubin told American Soccer Now from Utrecht. “I love the style of play and I’m developing every day and learning new things. Sometimes it can get hard just because the language, not knowing the players, and how they play. But it’s been a great ride and I’m excited for July to come around and finally be able to play matches.” “All the opportunities that came, I took them all in and thought, from America to Europe,” he continued. “I thought that the best option was to come to FC Utrecht. It was always a dream as well to go to Europe. It came to reality but it’s just the beginning to something that I hope continues to grow. The work just starts now and it’s only going to continue to get harder." "I can’t get complacent. I have to keep developing.” Many young American players have moved abroad to top European teams in recent years, including Junior Flores (Borussia Dortmund), Dembakwi Yomba (Atletico Madrid), and Marc Pelosi (Liverpool). Utrecht may not have the prestige as some of those clubs but signs indicate that management rates their new American prospect very highly. Rubin has a long-term contract but some within the club believe that his price tag may grow within the next few years to a point where he could be sold for a handsome profit. Next season will provide the first solid indicators of Rubin's progress. And while making the first team will be difficult, the confident youngster thinks it's an achievable goal. “The mindset for any professional and young player is to reach the highest level you can,” Rubin said. “I am aiming for the first team and I am definitely going to work hard over this summer on my game and perfect the things I’m not very good at. I am really excited just for next year. Hopefully when July comes around, I can join the first team and play matches." "I came here to reach that level," he added. "The club is excited and I’m excited, for sure.” When Rubin decided to turn professional last year, he had plenty of options both in Europe and the United States. After visiting clubs, Utrecht won over Rubin and his family because of the team’s expectations for him and because the path to the first team seemed direct and attainable.