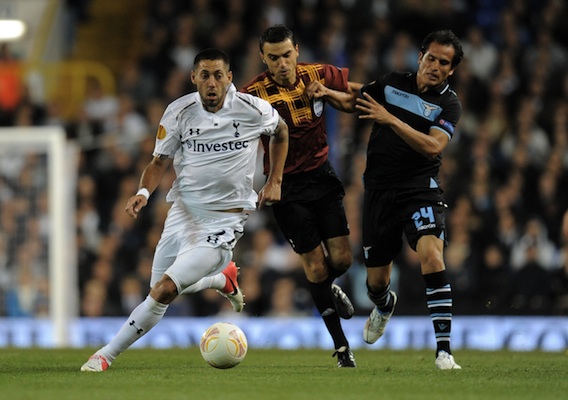 The NFL typically owns Thanksgiving, but today there are no fewer than five Europa League matches that could feature American players. Here at ASN, we are thankful for the "other" football.
BY John Godfrey Posted
November 22, 2012
7:12 AM
GROUP E
Molde v. FC Copenhagen
Joshua Gatt made a solid start to his U.S. international career against Russia on November 14, and today he and Molde will be desperate to secure the only result that keeps their European ambitions alive: a victory. The Norwegian champions are dead last in Group E but only two points behind second-place Stuttgart. A win at home against Copenhagen would ensure that the Ole Gunnar Solskjaer-led squad will still have something to play for on the sixth and final matchday within the group. Solskjaer, for one, is optimistic. ``At home we can beat anyone,'' he said. ``We got it tough the first half hour against them last time, but we came back and we had a very good last hour. We should win this match to be able to move forward.'' GROUP J
Lazio v. Tottenham (12:50 p.m. Eastern; Fox Soccer Channel, FoxSoccer2Go.com)
Clint Dempsey and Brad Friedel will be enjoying a Roman holiday today, as Tottenham travels to play Lazio in the Stadio Olimpico in one of the juiciest battles in matchday five. Both teams will be eager to win, as a victory will secure advancement to the Europa League knockout stage. "We expect a very difficult game," Spurs coach Andre Villas-Boa said. "Their last two results have been positive and the influence of the derby against Roma is always very important to their motivation." Spurs, on the other hand, have not played well in recent weeks. A win in Rome, however, could give the team a welcome boost. "We will be up for it for sure because we don’t want to delay things, if there is a possibility of qualification here, that’s what we’re going to play for. That's important for the squad," Villas-Boa continued. "It could be a good European night. It's a game – and I’ve spoken about this in the past – that could be a Champions League fixture, playing in this stadium against a team full of history. I’m sure both teams will approach it in that way." GROUP K
Rosenborg v. Rapid Vienna
Terrence Boyd and Rapid Vienna have no chance of advancing in the tournament, but that doesn't mean that they will lack motivation to perform today. Rapid are the only team in the competition who have yet to secure a single point, and can change that with a draw or tie against Mix Diskerud and Rosenborg. ``We want to wipe away this stigma," Rapid Vienna coach Peter Schottel said. And Boyd, the 21-year-old U.S. international, will no doubt want to add to the two goals he has scored thus far in the competition. GROUP L
Hannover v. FC Twente
Helsingborg v. Levante
Hannover is through to the knockout stage, and team captain Steve Cherundolo is recovering from a minor neck injury, so there is little chance that the American will see any action when Dutch side FC Twente comes to town. Helsingborg midfielder Alejandro Bedoya, however, should see more action as the Swedish side host Levante in a crucial match for both teams. Levante can lock up a place in the next phase with a victory today, while Helsingborg needs to win both of its two remaining matches to have any chance of advancing. Helsingbord coach Age Hareide spelled it out quite clearly: ``We must win. We have to keep focused. We created goals in both games against Twente and Hannover, we are strong at home and we have to show that against Levante.''