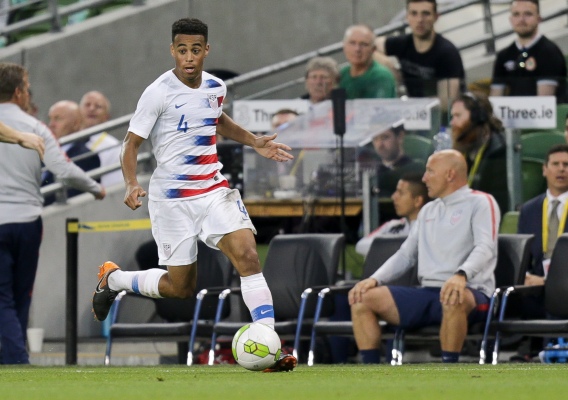 Five thoughts on the USMNT loss to Ireland

What are the takeaways from the U.S team's loss to Ireland in Dublin? What lessons were learned and where does the team need to improve? Those are just some of the issues explored as ASN's Brian Sciaretta gives his five thoughts on the game.
BY Brian Sciaretta Posted
June 02, 2018
6:00 PM
IN ITS SECOND of three friendlies, a very young United States national team lost to Ireland 2-1 in Dublin when it conceded two second half goals, including one in the 90th minute, it what was overall a lackluster game.

It is a weird time for the national team program as no meaningful games are on the horizon and the team has still not hired a general manager or head coach.

That does not mean that these friendlies are not important or do not serve an important purpose. Considering the context, here are five thoughts from the loss in Dublin.

In the end, a good learning experience


This game was not pretty and the young American players struggled in some important areas. But now is the time when things should not be easy for the team. Most of the players are new to the international stage and many are unfamiliar with each other. Some players are still new to the professional game.

What U.S. Soccer wants, is to see players get their feet wet and learn from every game. A win over a bad Bolivian team might be useful in terms of getting some confidence but a loss to Ireland raises the bar and sets a standard for what it takes to win on the road in Europe against an average UEFA team.

Few people are going to remember this game years from now. But if it gives this young team a chance to grow and the players take lessons from it and apply it in future games, it will be well worth it.

It is often said that the results in friendlies don’t matter. This is especially true in tough situations that the U.S. team finds itself in right now. What matters is whether the players learned more about each other and the standards of the international game.

Passing out of the back was a big concern


One of the big reasons why the U.S. team did not have much success against Ireland is that it really was not effective passing out of the backline. It wasn’t just the central defenders either because the fullbacks of Jorge Villafana and DeAndre Yedlin also struggled to either make dangerous runs or passes.

As a result, the midfielders had to play closer to the backline to receive the ball and U.S. team was frequently able to possess the ball in the attacking third of the field.

Perhaps Miazga and Carter-Vickers just had off games and that is possible as both are coming off of long European seasons. Familiarity should not be a problem because both have an established partnership dating back to the U-20 level in 2014. Miazga also cites it as a strength in his game after two successful years in the Eredivisie – a league that stresses smooth passing defenders. Perhaps the problem was also on the midfielders in getting open in passing lanes.

No matter the problem, the next coach will want to make this an area of focus early in the cycle.


When you look at the central midfield triangle of Wil Trapp behind Weston Mckennie and Tyler Adams, each player was decent against Ireland on an individual level. Trapp sometimes struggled defensively with the physicality of Ireland’s midfielders but he also made some solid passes.

But while these three were solid individually, collectively as a unit they did not consistently produce enough scoring opportunities or sustained pressure on Ireland’s backline.

This midfield needed a No. 10 to tie it all together and lead the creativity. Neither of these three play that role for their clubs or are suited to do so for the national team. With a No. 10, it will allow Trapp, Adams, and McKennie a chance to do what each does best.


Goalkeepers need regular minutes. It is hard for the U.S. national team to expect a goalkeeper who rides the bench for his club to come into a camp and be ready at the international stage. Bill Hamid left DC United last October for FC Midtjylland where he has hardly played.

Hamid is a better keeper than he was against Ireland. Against Ireland, he misplayed crosses and his misplay directly resulted in Ireland’s first goal.

Unless he can break into the starting lineup at FC Midtjylland or elsewhere, there is a real possibility he won’t be in the national team’s first three, regardless of whoever the coach is. It’s hard to see Zack Steffen not being the No. 1 and Alex Bono is likely No. 2. Hamid has the talent to push many of the young and upcoming keepers but at the moment, it’ll be very hard for him to do so unless he plays regularly.


It was a tough learning experience for the young U.S. players but it wasn’t completely bad at all. Three teenagers all had decent stretches.

Tim Weah’s final pass and shot let him down but once again, he was regularly making effective runs and putting himself into dangerous positions.

Weston McKennie’s offense didn’t come alive until later in the game but defensively, he is a physical presence that can really limit an opponent’s ability to control the middle of the field. That was the case against Ireland

Similarly, Tyler Adams’ frantic style of play can force turnovers, push a counterattack, and be tough to defend. He wasn’t always dangerous against Ireland but he was part of many of the best U.S. opportunities from the run of play.

Neither of these three had senior national team experience prior to November. Now all three will have a head start beginning the next cycle for new coach, whoever that might be.