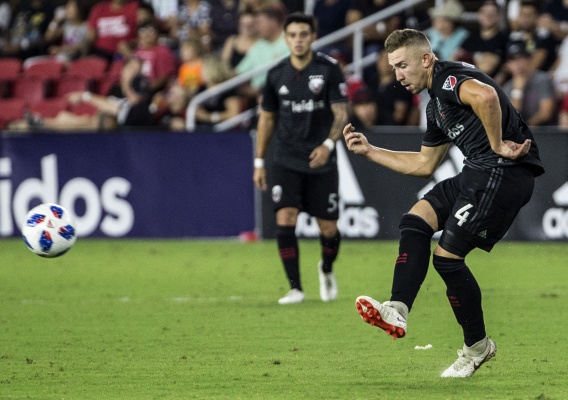 The United States national team has added a lot of new faces into the player pool in 2018 but there could even be more coming in the months ahead. Here are five potential candidates to earn their first USMNT call-up in the near future.
BY Brian Sciaretta Posted
September 13, 2018
5:00 PM
THE SEPTEMBER friendlies are not in the history books and interim head coach Dave Sarachan has now coached eight games for the United States and will likely coach at least another two games in October.

While Sarachan will likely not coach anything other than friendlies for the U.S. team, his tenure will be remembered for introducing a wave of new players into the national team that will certainly provide a foundation for the next coach to build upon.

Some of the players to earn first caps under Sarachan are likely to have big roles in the team in the years ahead. These players include Weston McKennie, Tyler Adams, Zack Steffen, Cameron Carter-Vickers, Antonee Robinson, Tim Parker, Josh Sargent, and Tim Weah. Other players like Marky Delgado, Shaq Moore, and Keaton Parks are also looking to become regulars.

Sarachan told the media in camp that a few new players might be added in the additional camps moving forward – should he continue to be the coach. He is signed through the rest of year but new general manager Earnie Stewart said a new coach might be in place by November.

But who are the new players to the team that could receive call-ups? Granted that most of the top tier prospects have already been capped but there still a bunch of players building solid cases to get callups.


Jonathan Amon, 19, has been making quite a name for himself in Denmark where he is earning rave reviews for his performances for FC Nordsjaelland. A small but explosive winger, Amon offers speed from the flanks and that position is thin at the moment in the national team player pool.

Tab Ramos has pointed out in multiple interviews that he sees Amon as an important part of his team – even if injuries and club commitments have limited the South Carolina to just one U-20 callup this year.

While Amon has shown enormous potential, his biggest issue is staying healthy for a long stretch of time where he can show that he can consistently play at high level on a weekly basis. He has plenty of room to grow tactically and defensively but his dibbling in 1v1 spaces is exciting where he typically plays on the left side with the freedom to cut into the middle.


Since returning from an injury that kept him out the first half of the season for DC United, Canouse has been extremely impressive and has emerged as an important part of his team’s climb into playoff contention.

Canouse, 23, developed for many years in Germany at Hoffenheim and was set to be a starter for the U.S. U-20 World Cup team in 2015 before an injury ruled him out of the tournament a week before it started. In U-20 World Cup qualifying, Canouse served as the team’s captain.

Canouse has a lot of strengths and is very polished. What is even more interesting about him is that he is a true No. 6 defensive midfielder – which is not that common in the U.S. player pool. There are currently a lot of central midfielders in the pool at are No. 8’s or a combination of a No. 6 and No. 8. But there are not many players who are completely developed and set as a No. 6. Canouse, however, is.

In DC United’s comeback 2-1 win over Minnesota on Wednesday night, Canouse put on a stand-out performance – which he seems to be doing on a weekly basis. Like Amon, Canouse needs to stay healthy. But if he does, it is easy to envision him on the U.S. team at some point.

Excellent passing, industrious work in midfield. His return has been crucial to #DCU's resurgence. pic.twitter.com/6FNRNJh8Aj


Without question, the starting right back position on the U.S. team belongs to DeAndre Yedlin who is a regular starter for Newcastle United.

But the U.S. team will need more than one right back and the backup behind Yedlin is not settled. Shaq Moore has played for the U.S. team for most of 2018 but don’t be surprised if Sarachan or the next U.S. coach gives a look to Reggie Cannon who has been very impressive for Western Conference leading FC Dallas.

Cannon, 20, has already made 27 starts this season for FC Dallas and has amassed nearly 2400 minutes and has been one of his team’s more consistent performers showcasing impressive athletic ability to cover the flanks and push forward effectively into the attack.

The United States U-23 Olympic team will begin preparations next year and Cannon should be expected to be the team’s starting right back. But it would hardly be a surprise if he moved into the mix as the backup right back on the full national team.


Hobro IK has had a poor start to the Danish Superliga season. Through eight games, the team from northern Denmark is in last place with just five points.

The one bright start to their season has been Emmanuel Sabbi, 20, who has scored five goals and notched one assist (giving him a direct hand in six of the team’s eight goals this season) to put himself in a three way tie for second in the league in scoring.

A veteran of the 2017 U-20 World Cup team, Sabbi is coming off almost an entire lost season in 2016-2017 when work visa problems stalled a transfer to Las Palmas leaving him only to play with the U-20 team and train with the Columbus Crew. It was of no surprise that Sabbi was rusty for the U-20 team at both World Cup qualifying and the World Cup.


Here is Emmanuel Sabbi’s goal to pull Hobro even with Sonderjyske 1-1. It is the 5th goal of the season for the 2017 United States U-20 World Cup forward. Game is still 1-1 in the 62nd #USMNT pic.twitter.com/lcfwg29xNw

As a result, Sabbi’s career is only now just beginning and he is using his first-rate athleticism to rack up impressive numbers to start the Superliga season. It is easy to see him continue his success in Demark because players as athletic as he is are not common in Demark. If he develops well in the Superliga, then he should be able to combine technical ability along with his athleticism and continue to be an offensive threat at a bigger league.


Romain Gall’s rise in the professional game is a great story. He was one of the last players cut from the United States U-20 World Cup team in 2015. He then signed for the Columbus Crew but did not find much success there as he played three games, went on loan to the Austin Aztex in the USL, and was eventually waived by the Crew in 2016.

Gall, 23, then went to restart his career in Sweden but had to begin at the country’s third tier with Nyköpings BIS. In 2017 he earned at transfer to GIF Sundsvall in Sweden’s top flight, the Allsvenskan, and put up relatively modest numbers with two goals in 1421 minutes.

In 2018, Gall has enjoyed a breakout year in Sweden. A torrid start with GIF Sundsvall saw him transfer to defending champion Malmo over the summer. Between GIF Sundsvall and Malmo, Gall has scored 11 goals and notched six assists in 21 games across both the Allsvenskan and the Swedish Cup. This fall, he will also compete in the Europa League group stages with Malmo.

Born in Paris, Gall moved to Virginia when he was seven and became an American citizen when he was 15. He developed blossomed into a versatile attacking midfielder while developing at the youth levels of DC United, Real Salt Lake, and Lorient in France.

Gall has fought through a lot of hard times to get where he is now but he finally blossoming into a very productive attacking midfielder either on the wings or centrally – which are positions where the U.S team could use more depth.

Honorable mention: Auston Trusty, Brendan Hines-Ike, Tim Melia, Keegan Rosenberry*, Stefan Frei*, Justen Glad*
* called up once before in a January camp but did not take part in the friendly.