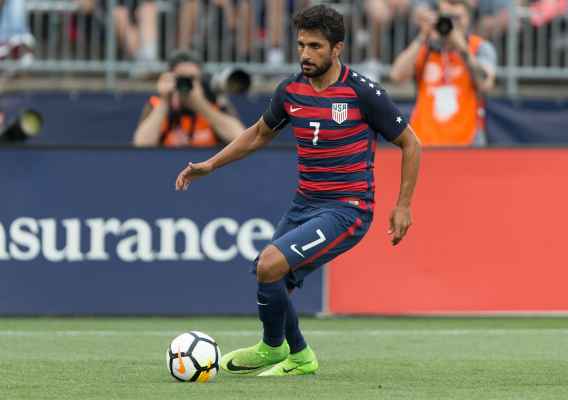 Finally healthy, Saief wants to be part of the USMNT rebuild

Over the past seven months Kenny Saief has been to hell and back. But now after changes in both his club and national team as well a frightening stay in the hospital, he has returned and is playing outstanding soccer. Next he wants to be part of rebuilding the United States national team.
BY Brian Sciaretta Posted
February 01, 2018
5:50 AM
THE LAST SEVEN MONTHS have been an emotional and professional rollercoaster for many in the American soccer community. For Kenny Saief, however, the ride has been especially dramatic.

At the start of last summer, Saief, 24, was still on the books as representing Israel internationally and had come off a season where he played for Gent in the Champions League and had standout performances against top teams such as Tottenham. But towards the end of the season, he was approached by Bruce and Kenny Arena about filing a one-time switch to play for the United States.

Born in Florida, Saief left the Sunshine State for his parents’ native Israel and never returned to the country of his birth. Still, he was eager to play for the United States internationally and went forward with the switch. While not fully fit, the left-footed midfielder played for the U.S. team in the run-up to the Gold Cup and earned his first cap in a friendly win over Ghana.

An injury forced him to withdraw from the team before the Gold Cup but he recalls the experience as being one of the highlights of his career.

“They were such great people,” Saief told ASN from Belgium. “I really enjoyed every moment of it. They really took care of me - everyone from the staff to the players. They treated me fantastically. I met a lot of new people and I hope to see them again. I am very happy I was a part of the team.”

But as soon as his career was taking off both at the club an international levels, everything came screeching to a halt. Saief left the U.S. national team because of a hernia which required surgery and travelled to Israel for what seemed to be a routine operation.

At first, all appeared to be normal. But shortly afterward, doctors discovered a growing abdominal infection at the location of the surgery. Doctors in Israel struggled to get it under control and Saief travelled to Belgium for ongoing treatment.

In the following weeks, his prognosis was both uncertain and complicated as the infection lingered. His return to soccer was delayed indefinitely. At times, Saief feared the worst.

Eventually, Saief was able to make a recovery but a lot changed for him while he was away. Hein Vanhaezebrouck, his longtime coach at Gent, left for Belgian rivals Anderlecht. The United States national team shockingly stumbled down the stretch of World Cup qualifying and failed to earn a spot in Russia.

Saief’s career was in a completely different place than was expected just months earlier. But throughout his recovery, he had a lot of support. He remained in contact with Bruce and Kenny Arena along with several of his U.S. teammates, such Eric Lichaj (his roommate from camp) and Bill Hamid, who texted him encouragement.

“Bruce texted me many times about how I was feeling and doing,” Saief said. “He really followed me. Also Kenny was texting me to about my recovery. It was really nice. I am still talking with some of the players. It's really nice to know that people still care and are still sending me messages.”

But the best moment came on November 24 when Gent hosted Mouscron and Saief made his long-awaited return to the field when he was subbed into the game in the 76th minute of a 3-1 win. The moment was not lost on the Gent supporters who were well aware of the severity of Saief’s injury. As Saief walked onto the field he received a massive ovation.

“It was really fantastic,” Saief said of the Gent ovation. “After all the years we had together. It was a long time for me to come back to the pitch and the way the fans treated me when I came to the field for the first time after my injury was a very emotional moment. I really appreciate them for their support and it was a moment I will never forget.”

So far 2018 has been very kind to Saief. In January he secured a loan to Anderlecht that also included an option to buy (it is widely expected Anderlecht will exercise this option after the season). That move reunited him with his former coach Vanhaezebrouck – who persuaded Anderlecht to sign Saief. Anderlecht is historically the strongest team in Belgium but currently sits in third place.

Saief has not disappointed since arriving at Anderlecht. In his second game against Waasland-Beveren, he scored the equalizing goal in a 2-2 draw in the 83rd minute.

Then the following week he hit a stunning assist to Sofiane Hanni in a 3-3 away draw against Standard Liege.

“I've been with [Vanhaezebrouck for three and a half years and we did great things together,” Saief said of signing for Anderlecht and reuniting with his former coach. “I know what he is asking from the guys. I know the system he is playing very well. I know what I need to do. For his system I think he preferred to take people he used to work with. For the past few years I've played in European games beyond the league. I would be very grateful this year if we can compete again… We still have a chance to compete for first place.”

“It took around five months to be back at this level,” he added. “I was away for a long time from the field. I worked really hard to get back. I am very grateful to be here at Anderlecht and playing games again.”

With his move to Anderlecht and his return to top form, Saief has also not lost sight of the United States team. While his time with the team so far has been brief, he closely followed the remainder of the unsuccessful World Cup qualifying campaign and subsequent friendlies. As opposed to being discouraged by the failure, he now desperately wants to be part of the team's rebuilding.

“Of course I was following it," Saief said of the U.S. team missing out on the World Cup. "I felt a part of it and the team. I was disappointed but this is also part of football. I think everyone needs to look forward to the next World Cup and trying to build a new team. I am waiting for my next opportunity to be part of the national team. It's a big privilege to be there. I am working very hard to have chance again to be part of such a good team. I hope I can help with the new challenge to move towards the next World Cup."