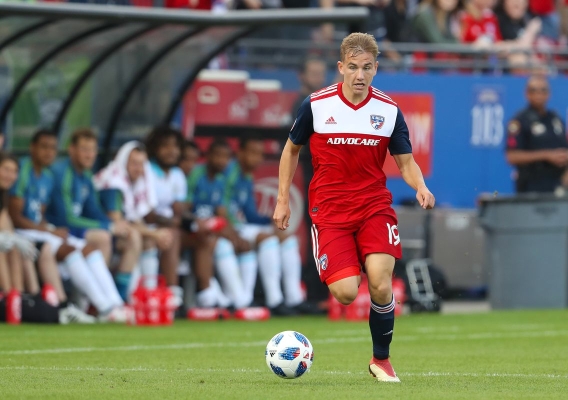 Finally healthy, Pomykal is ready to lead the way for FC Dallas in Orlando

Paxton Pomykal is one of the best young American players in MLS but it has been a tough road lately as he played through pain in 2019, had surgery, missed a USMNT camp and preseason in early 2020 and had his comeback stalled by the shutdown. Now healthy and with soccer set to resume in the United States, Pomykal is ready to get going again. Brian Sciaretta spoke at length with the U.S. U-23 midfielder about his career to date and his goal for the future.
BY Brian Sciaretta Posted
June 17, 2020
10:30 AM
THE MURKY NATURE of soccer throughout the globe in 2020 is affecting all players. As with every year, players have goals and aspirations they want to achieve but this year has forced everyone to recalibrate. Here in the United States that is particularly true for young players after 2019 saw a significant number of U-23 and U-20 eligible players earn meaningful minutes. 2020 was going to be a year when these young players were going to attempt to transition from being mere youth players into impact players. But is that now possible?

Paxton Pomykal, 20, is widely considered to be one of the most talented domestic-based American players at the moment. Playing as a creative midfielder who can play the No. 8 and the No. 10, last year he showcased himself well at the U-20 World Cup where he helped the U.S. team advance to the quarterfinals and with an FC Dallas team that advanced to the playoffs only to be bounced by eventual champions Seattle in extra time.

But with Pomykal, 2020 was going to be especially important because he had the goal of showcasing himself at 100% for an extended period. He has had surgeries in each of the past three calendar years – left meniscus in 2017, right meniscus in 2018, and then on his groin in the 2019 offseason.

But it was the last injury that was especially disappointing as Pomykal played through pain the last two months of the season in 2019 before surgery. The surgery forced him to miss time with the U.S. national team in January and for a significant portion of the preseason with FC Dallas. Finally fit and healthy, 2020 was going to be a chance for him to play at 100% for an extended stretch and play to his potential on a regular basis.

But then the shutdown hit.

“I was dealing with hamstring pain earlier in the season but the significant pain I dealt with the rest of the season was after the Chicago game we played after the national team camp,” Pomykal said. “I was dealing with a lot of pain and looking back on it, it was the right decision to get surgery – maybe I should have gotten it sooner but at the same time, I wanted to be available for my team. Ultimately, I had some very good performances that made playing through the pain worth it…After training for month or so now, I feel really good. Hopefully that good health stays with me into Orlando and beyond that. My body feels really good.”


The next step for Paxton Pomykal was adding goals + assists. So far so good.

But don't forget the first step – the stuff that got him on the field in the first place. pic.twitter.com/MDVUohy7wp

“I was at full health [in March], and then to be shut down like that was kind of a bummer,” Pomykal added. “My goal this season on a personal level was to maintain my health and fitness – to be able to go week-in and week-out and have that consistency…. Last year I had some really good games and some poor ones as well. I need to balance them out more and not miss as many games as I did because of the soft tissue injury. That is one of my highest priorities right now.”

The fact that Pomykal is now back to full health will make him one of the players to follow closely at the league’s upcoming tournament in Orlando. Billed as the “MLS is Back tournament,” it will feature group stage games that will count towards the regular season and a knockout stage where teams will compete for a trophy which will also include a berth in the 2021 CONCACAF Champions League.

In the tournament, FC Dallas was drawn with Seattle, San Jose, and Vancouver. Pomykal is optimistic for the remainder of the season following Orlando but acknowledges that nothing is a given these days (he added: “obviously, if we get to finish the season then it would be a massive bonus”).

With other American professional leagues like MLB and the NBA showing how difficult a restart is during this pandemic, the fact that MLS has enacted firm plans only makes the tournament more impressive and therefore more meaningful.

Bryan Acosta with a screamer for @FCDallas (and that Pomykal assist)! #DALvLA pic.twitter.com/eAnAh7ouil

“This tournament for me is massive,” Pomykal explained. “I am a competitor and I love to compete. Regardless of if I was going there to win one dollar. A trophy is a trophy. I love to win…The Champions League birth is obviously a little cherry on top. The first games count towards the league. But in the end, this is a trophy.”

While Pomykal was recovering from surgery, it was an important time for him in that he opted to sign a new deal with FC Dallas. The club has been the most bullish club in the league when it comes to playing young players but it remains to be seen how it will sell players. Dallas has sold Carlos Gruezo to Aubsburg in the Bundesliga and a move for Reggie Cannon is anticipated.

Pomykal still has not put in the same minutes as those players have but does not discount that he wants to eventually move to Europe when he is ready.

“I am a present person,” Pomykal explained. “But I have dreams and aspirations. I grew up watching the Champions League and my favorite team is Arsenal. We’ll see where the future takes me. It’s not like I have to go to Europe tomorrow but I’m also not saying I want to stay in MLS the rest of my career. Having that mindset is going to be beneficial to me because you never know where soccer will take you, you never know when coaches get hired or fired….You don’t know who wants you or doesn’t want you.”

As far as international play goes, Pomykal acknowledges his priority right now is to simply play with his club. International soccer right now is unsettled and the focus throughout the globe is getting leagues back up and going.


Pomykal’s ability to slow down the play and look for his best option is ALMOST my favorite part of this goal. That wall pass though ???? ???? ???? #ThisIsDallas #Pomykal #FCDallas #USMNTpic.twitter.com/HojH5m81tF

This also comes at a time as Pomykal had been making inroads internationally. In 2018 he proved himself to being an integral part of the U.S. U-20 team and then that carried over into the U-20 World Cup in 2019. Later that year he made his debut for the United States national team in 1-1 draw against Uruguay.

Then in March, he was named to the U.S. U-23 team for Olympic qualifying just prior to the tournament being cancelled due to the COVID-19 pandemic. The 2019 U-20 team is still very close and has a regular online group chat where they recalled last year’s tournaments. Pomykal describes that group as a “family” and he is frequently in touch with Chris Richards, Chris Gloster, and his Dallas teammate Brandon Servania. But together as an entire team, they are a group that wants continue to move forward together internationally and improve the results of U.S. Soccer.

For many, that next step is the current U-23 team.

“It’s kind of taken a back seat now considering all the things that are going one,” Pomykal said of the U-23 team. “We have communication with the national team but I don’t really know the next steps for that. My focus right now is here and FC Dallas things I can control. When the time comes, my attention will shift to the U-23 team.”

But first things first for Pomykal, and that will be a strong showing in Orlando and possibly the rest of the season in 2020. Dallas is one of the most interesting teams in the league which features many locally developed American players.

That is a source of pride for Pomykal who believes that this year, Dallas can show this model of developing domestic-based players while supplementing it with experienced veterans who can provide a way to win, and not just build rosters for U.S. youth national teams and possibly sell players in the future.

“Look at the results against the [top] teams,” Pomykal said. “I don’t think any were blowouts. They were all close games. They won a few, we won a few. I think we can compete with any team in the league regardless of payroll or who is on the team. We added a few guys as well. Although we were a young team, going into the playoffs we were a family and a unit. That youth is going to gain experience from last year. Now all those young players are one year older and have more experience. Hardware is something I want and I think I can achieve that at FC Dallas.