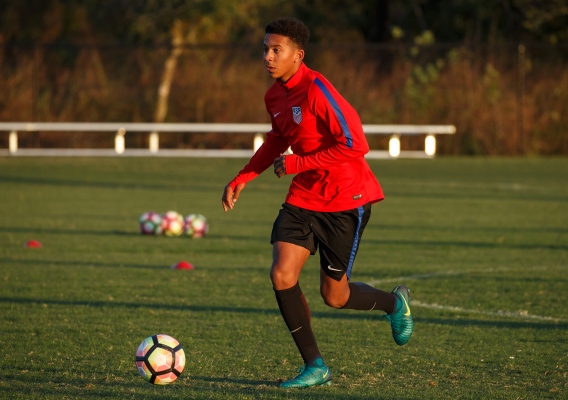 FC Dallas and Bayern Munich have created a partnership and the first player involved is U.S. U-20 defender Chris Richards who impressed the Bayern staff earlier this spring on a training stint. Now on loan with the U-19 for the German powerhouse, Richards eyes a big year ahead.
BY Brian Sciaretta Posted
July 17, 2018
10:05 AM
IT WAS NOT LONG ago that U.S. U-20 defender Chris Richards played central defense for the first time. His team in Alabama was playing at an important tournament at the Walt Disney complex and all its central defenders were injured. It was a tough moment for the team but one which launched the career of a top American teenage defender.

Richards, 18, recalls being very nervous when his coach, Thomas Fox, asked him to play the position. Throughout his youth career he played primarily as a winger but only recently began playing left back. A move to central defense was something that he wanted no part of.

But all that changed as soon as the opening whistle sounded in his first game at Disney.

“At first I was like: 'there's no way. There is too much pressure. I am the last player before the goalkeeper. I don't know if I can do this,’” Richards told ASN from Germany. “But right after the game began, I started connecting passes and I fell in love with the position. The rest is history.”

That was in 2014. Fast-forward to 2018, Richards has just completed another training session with the first team at Bayern Munich. Signed to FC Dallas as a homegrown player, Richards went to Germany last week on a loan to Bayern Munich’s U-19 team in the first move of a partnership agreement announced in the offseason between FC Dallas and Bayern Munich. He had trained with the club earlier in the spring for a 10-day trial and impressed the German power to the point where it wanted him back.

“Chris made a very good impression,” said Bayern's head of youth development Jochen Sauer. “We wanted to bring him back to further develop him, expose him to different coaching styles, opponents and environments.”

So far it has almost been a baptism by fire for Richards as Bayern Munich wasted no time throwing the American into high-level situations beyond the U-19 team and it’s something that Richards appreciates.

“I was on the same team as Arjen Robben for a small sided game we did in training,” Richards said. “You always hear about his wicked left foot. But it is completely different when you see it in person on the same field. I mean he just takes a touch inside and it is automatic - he goes top 90 every single time. It is so crazy. It's been a really amazing and humbling experience so far. Being able to train on the same field as Robben and Ribery, it's something you can only dream about - but it's a reality now. I am actually training with these guys and interacting with them. At first it was a little nerve-wracking but once they see you can play, they begin to open up to you both on and off the field.”

“Of course, they're big time professionals and they expect a lot out of you,” he added. “It really drives you to become a better player. They understand and that even if sometimes it seems like they're being hard on you. They know what they're talking about. They're amazing players but they make other players around them amazing.”

The path that brought him to Munich began in his native Hoover, Alabama, where Richards impressed for his Olympic Development Program team and club teams. He caught the eye of former MLS player Eric Quill, the academy director of Houston Texans SC who convinced Richards to join his team. It was a very effective move as Richards helped the Texans win the 2017 U-17/18 Development Academy national championship with a perfect six-match playoff run which culminated in a 2-1 win over the LA Galaxy in the final.

“I grew up playing in Alabama until I was 16,” Richards recalled. “Eric Quill of the Texans called me in the summer of 2016. Though it's a small club, they're doing a lot of things right there. They had me play up to the U-18s even though I was a 2000. We ended up winning a national championship and then Dallas came calling. It was something you couldn't resist.”

Like many young players of his generation, Richards wants to move abroad at a young age. Still he felt that FC Dallas would be a good place to start on his journey. Before he signed his contract, he knew about the partnership agreement with Bayern. He was also swayed by the number of homegrown players Dallas has played – even though he himself couldn’t be added to the first team roster until 2019.

Throughout the spring, Richards trained and scrimmaged with the first team at Dallas, which he believes “has been really great for my development because Oscar [Pareja] is amazing when it comes to youth development and as a coach overall. He understands that with the youth, we're up next.”

But training could only take him so far and the loan to Bayern was arranged. Over the weekend he made his Bayern U-19 debut in a 3-1 friendly win over Slavia Prague. He entered the game in the 30th minute with the score even at 1-1.

“One of my plans was to get to Europe as fast as possible which I think that is any soccer player's plans since Europe has the best leagues,” Richards said. “Dallas understood that and realized that. Even though I couldn't be added to the first team roster until 2019, they understood that I needed games and what better way than to send me to Bayern in the best youth league in the world? Of course, Dallas has the reputation for signing a ton of homegrowns and actually playing them. For Dallas, my goal is to get as many first team minutes as possible and hopefully if the call comes to go to Europe, I can take that call and Dallas will be understanding of it.”

In addition to Bayern Munich and FC Dallas, it is also going to be a big year for Richards on the international level as he is in the plans for Tab Ramos in the U-20 team moving forward. He impressed at a recent camp in Honduras and figures to be part of the qualifying roster (if released by Bayern) as well as at the U-20 World Cup next May and June in Poland, should the U.S. team qualify.


The next year is going to be a critical time for Richards, which could see him showcase himself with Bayern Munich, the U.S. U-20 World Cup team, and perhaps the first team at FC Dallas.

“Qualifying is a big priority to me,” Richards said. “I always want to represent my country on the international level. Now I have the chance to do that and it's a dream. While playing for Bayern is also a dream, representing my country is something I've always tried to strive for. Last camp in Honduras, it was a great experience... we were kind of timid towards each other at the beginning of camp because many of us never played together. Then at the end of camp we got a 3-1 win and we were clicking. It was a great team performance. It was great to see.”

Richards smiles when he things about the team’s chances in Poland if Tab Ramos is able to get his top players – a group which could include Josh Sargent, Tyler Adams, Chris Durkin, Jonathan Amon, Tim Weah, Nick Taitague, Andrew Carleton and his friend from FC Dallas, Paxton Pomykal.

“We're taking it to the final,” he said with a laugh. “No question.”