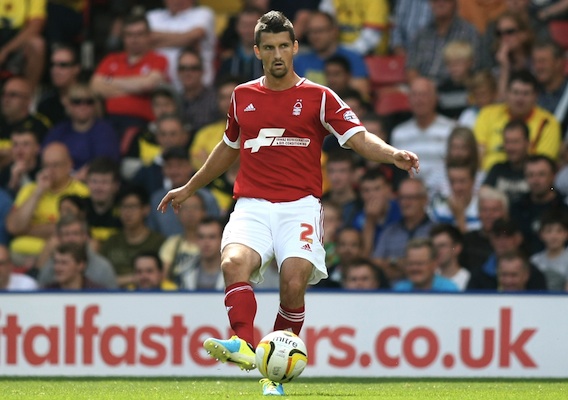 Jurgen Klinsmann called in 23 players for the two international friendlies against Scotland and Austria. Along with many familiar names, the coach included—finally!—Nottingham Forest fullback Eric Lichaj.
BY John Godfrey Posted
November 11, 2013
11:15 AM
WE'RE GOING TO BE all over this roster and these two friendlies in the coming week or so, but before we do we wanted to get the roster out to you asap. Here it is. GOALKEEPERS (3):
Bill Hamid (D.C. United), Tim Howard (Everton), Sean Johnson (Chicago Fire) DEFENDERS (7):
DaMarcus Beasley (Puebla), John Brooks (Hertha Berlin), Geoff Cameron (Stoke City), Brad Evans (Seattle Sounders FC), Omar Gonzalez (LA Galaxy), Eric Lichaj (Nottingham Forest), Michael Orozco (Puebla) MIDFIELDERS (7):<br /> Alejandro Bedoya (Nantes), Michael Bradley (Roma), Mix Diskerud (Rosenborg), Fabian Johnson (Hoffenheim), Jermaine Jones (Schalke), Sacha Kljestan (Anderlecht), Brek Shea (Stoke City) FORWARDS (6):
Jozy Altidore (Sunderland), Terrence Boyd (Rapid Vienna), Clint Dempsey (Seattle Sounders FC), Aron Johannsson (AZ Alkmaar), Eddie Johnson (Seattle Sounders FC), Chris Wondolowski (San Jose Earthquakes) There are some interesting exclusions—Landon Donovan, Brad Guzan, Matt Besler—and some intriguing inclusions—John Brooks, Eric Lichaj, Brek Shea—but it has to be said that this is a very strong team. "We are excited about the group we have coming in and the big opportunity to finish the year on a high note," U.S. head coach Jurgen Klinsmann said. "We want to use these games to prove a point and see that our players are continuing to improve as we build towards the World Cup. The results in MLS wound up fitting in with our roster plans,so we didn't need to call in any guys who are still in the playoffs. There are some injuries issues that now give other players the chance to step up." We will be updating our Starting XI tool shortly with these names. We want to hear your thoughts on the roster below, and in a few minutes, see your Starting XI choices.