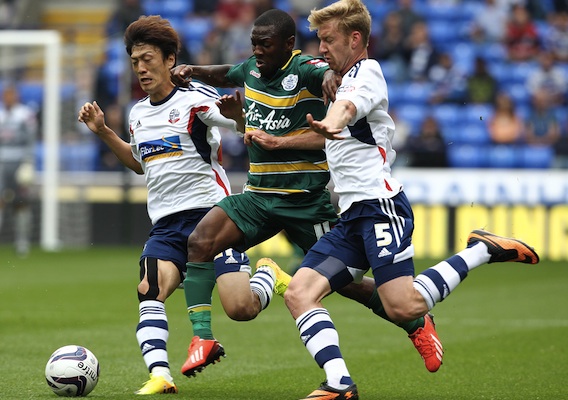 Eric Lichaj and Tim Ream Stepping It Up in Europe

American soccer supporters didn’t have much to cheer about in Europe this weekend, but ASN contributor Brian Sciaretta still managed to find five quality performances on the continent.
BY Brian Sciaretta Posted
October 07, 2013
10:06 AM
THERE’S NO TWO WAYS about it: It was a rough weekend for Americans playing in Europe. Very few players had positive performances or were part of winning results, and many top athletes were injured. As a result, this weekend’s list of top performing Americans in Europe features players who are currently off the national team radar. If the U.S. national team actually had meaningful games to play in this international break, it might be a reason to worry. But with 2014 World Cup qualification safely secured, Jurgen Klinsmann knows the pressure is off—for the moment. No. 5—Jordan Seabrook
Finnish club Vaasan Palloseura, better known simply as VPS, is not one of Finland’s strongest clubs. But it is pursuing third place in the country’s top league, the Veikkausliiga. A third place finish would be a solid achievement and it would guarantee a spot in next year’s Europa League qualifying. On Saturday, VPS earned a very important 1-1 draw over MyPa. American midfielder Jordan Seabrook scored the lone goal for VPS and he has been one of the club’s best performers on the year. His clutch goal gave VPS a point and now, with two games remaining in the Veikkausliiga season, VPS is sitting in good shape. No. 4—Conor O’Brien
Conor O’Brien’s decision to leave Nordsjaelland has proven to be a shrewd move. The club won the Danish Superliga in 2012 but could be relegation fodder this year. O’Brien, now at Odense BK, has been waiting for the opportunity to claim a spot in the starting lineup and he may have done that on Sunday. He played a solid 74 minutes in a 3-1 road win over third place Esbjerg. Per usual, O’Brien was strong in central midfield and helped Odense both in possession and in defense. With a performance like this, O’Brien is in good shape to be in the club’s starting lineup after the international break. No. 3—Eric Lichaj
Eric Lichaj’s steady performances this season for Nottingham Forest have won over fans in the East Midlands. Next up on the right back’s agenda: winning over the United States national team coach. From a consistency standpoint, Lichaj should be well on his way to doing just that. On Saturday, Nottingham Forest came up with another big win, defeating Brighton & Hove Albion, 3-1, on the road. Lichaj again was again solid and Nottingham Forest moved into fourth place in the English Championship. No. 2—Steve Clark
Honefoss truly has no business being in Norway’s top division, the Tippeligaen. If not for Steve Clark’s incredible performances, it would have been relegated last year. For his efforts, Clark was voted the league’s top goalkeeper. If Clark can help his team avoid relegation again this year, it will be an even greater achievement. As the season has moved into its final weeks, Clark has raised his game to an even higher level. Two weeks ago he was instrumental in a 3-1 win over Lillestrøm. Last week he made several big saves in a 2-2 draw against Viking. And this weekend he gave another terrific performance filled with acrobatic saves in a 0-0 draw against Rosenborg, one of Norway’s best clubs. With four games remaining, Honefoss are in 15th place in the 16-team league. The good news is that Clark and company only trail 14th place Tromso on goal differential and a 14th place finish would move them into a playoff to remain in the top flight. No. 1—Tim Ream
Entering this weekend Bolton were winless on the year, but Tim Ream had been playing well at several different positions—defensive midfield, left back, and central defense. Attending media considered him the team’s best player in several matches this campaign. On Saturday Ream played well again, helping Bolton to its first win of the year in a 2-1 road win over Birmingham City. Most importantly, the result moved Bolton out of the bottom three in the Championship and into 20th place. Over the past month, Ream is starting to play like the player who showed so much potential in his rookie season in Major League Soccer. Brian Sciaretta is a frequent American Soccer Now contributor and a member of the ASN 100 editorial panel. Follow him on Twitter.