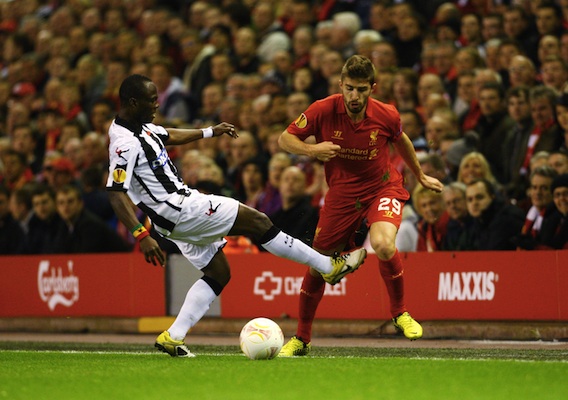 It’s been a quiet few weeks for the United States’ Group G opponents, but American Soccer Now won't be lulled to sleep in a World Cup year. Heres everything you need to know, and a bunch of videos.
BY Blake Thomsen Posted
February 11, 2014
9:57 AM

Portugal’s Cristiano Ronaldo is in the headlines, per usual, but this time it’s for a shocking red card rather than another brilliant goal. The Ballon d’Or winner was sent off and given a three-match ban for this altercation against Athletic Bilbao last weekend. Madrid has since had an appeal turned down, so Ronaldo will serve the full duration of the ban, ruling him out of La Liga games until March. He’s eligible for Copa del Rey and Champions League action, though, so he’ll still play a few more times this month.

Germany’s Philipp Lahm popped up with a rare goal in Bayern’s 2-0 win at FC Nurnberg. His dinked finish sealed the victory for Bayern in a game that American supporters will note for the 10th-minute injury sustained by Timothy Chandler. Going back to the previous weekend, Mario Gotze stole the show in Bayern’s 5-0 rout of Eintracht Frankfurt. Below is a video featuring most of his touches against Eintracht (his excellent volleyed goal comes at the 19-second mark). Gotze has been fantastic for Bayern all season and looks to be in top form heading into the World Cup. In other Bundesliga action, Ghana’s Kevin Prince-Boateng scored a late winner for Schalke against Wolfsburg with a coolly taken finish. Prince-Boateng has now scored nine goals in all competitions, an impressive return considering he’s mainly been deployed as a deep-lying central midfielder. The dynamic Prince-Boateng will need to be at his best when Schalke meets Ronaldo and Real Madrid in the Champions League knockout stage later this month.

Ghana’s Emmanuel Agyemang-Badu continued his fine recent form with a clinical goal in Udinese’s 3-0 win over Chievo Verona.
Udinese 3-0 Chievo All Goals by all-goals Agyemang-Badu’s improving performances for Udinese will help his chances of seeing more significant minutes in Brazil. He’s currently behind longtime starters Michael Essien and Sulley Muntari in Ghana’s central midfield. But Agyemang-Badu is arguably outperforming both of them at the moment, so he certainly has a case to start in the World Cup.

Asamoah Gyan’s rumored move to the Premier League never materialized. The prolific striker has responded by continuing to light up the Gulf League. He picked up two more goals this weekend in a 3-0 win over Dubai and debuted a solid new goal celebration as well. See the goals and the modified Tiger Woods fist pump below.

Ghana’s Andre Ayew made his return after a lengthy spell on the sidelines for Marseilles. Ayew injured his knee in Ghana’s playoff win over Egypt back in October and marked his recovery with a 17-minute cameo in last weekend’s Ligue 1 action.

There will be German national team players all over the field when Arsenal hosts Bayern Munich in the Champions League on February 19th. As many as eight starters for Germany will feature, so U.S. fans will have an excellent opportunity to see how they perform on a big stage in what should be an entertaining match. Blake Thomsen is an ASN contributor. Follow him on Twitter.