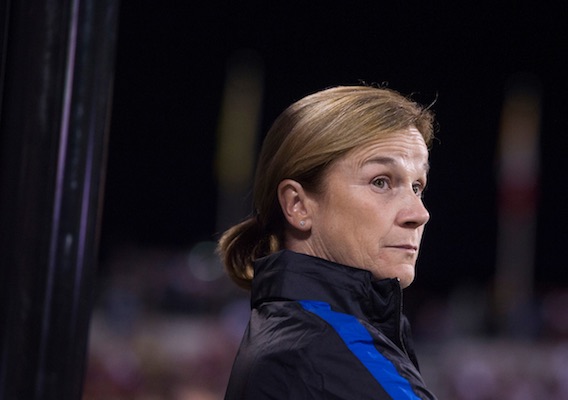 USWNT head coach Jill Ellis named her roster for the 2019 World Cup this summer and it contains many familiar names. ASN's John Halloran is here to break it down for you.
BY John Halloran Posted
May 02, 2019
7:30 AM
NEXT MONTH in France, the United States women’s national team will attempt to defend their World Cup title. On Thursday, head coach Jill Ellis named the 23-player roster that she believes can lead the Americans to glory once again.

While Ellis called in 58 different players to the senior national team over the last three years in an effort to broaden the player pool, the final list contained only a few surprises.

Here’s who made the team:

THE RIGHT SIDE OF THE BUBBLE


Aside from the players everyone expected to make the team, there appeared to be seven players “on the bubble.” Four of them made the roster; three did not.

The biggest surprise to make the roster is Morgan Brian. While the midfielder starred in the 2015 World Cup, she has struggled with inconsistent fitness over past three years. Brian even went as far as pulling herself from consideration for the team this spring as she and her medical staff worked to identify and correct the root cause of her numerous injuries.

Ali Krieger, another star for the U.S. in the 2015 World Cup, earned selection after a late run at the roster. Ellis brought the long-time veteran back into the squad last month after 18 months without a call-up as the coach made a last-minute search for more depth at outside back.

Jess McDonald returned to the team this fall after her own long-term absence from the national team. Despite appearing to be out of the fold late in the process, the forward used a standout season in the National Women’s Soccer League to receive one last opportunity. She then made the most of it, earning time in six of the U.S.’ nine matches over the past six months.

Finally, 2016 Olympic veteran Allie Long earned a place on her first World Cup roster. For a long period following the Olympics, Long remained an Ellis favorite—with the coach even giving Long an extended run as a center back—before falling out of favor in the summer of 2017. Long managed to make the World Cup team after earning only one start in 2018 and only 39 minutes of playing time in the U.S.’ seven matches this year.


The three bubble players who didn’t make the team are Andi Sullivan, McCall Zerboni, and Casey Short. Sullivan showed promise when first coming into the team in 2016, but then suffered an ACL injury in 2017 and went through a rough rookie season in the NWSL in 2018.

The more confounding absences are those of Zerboni and Short.

Zerboni is the most natural replacement for Julie Ertz should the latter pick up an injury or be forced into the backline—where she starred in 2015. But with Ertz the only player since the retirement of Lauren Holiday to play the No. 6 position in a way that both protects the defense and unlocks the offense, a like-for-like replacement is needed.

As such, Zerboni would have been the perfect fit. Instead, the U.S. will have to rely on a natural No. 8 in Sam Mewis, Lindsey Horan, Long, or Brian to get in the job done as the U.S.’ defensive midfielder should Ertz not be available. Attempting that strategy created a serious and notable gap in the team during the 2016 Olympics and ultimately proved disastrous for the U.S.’ attempt to win gold in Brazil.

Short’s absence is also a bit of a head-scratcher. While the outside back hasn’t seen many minutes for the Americans in recent months, she earned call-ups into 20 of Ellis’ 21 camps over the past two and a half years—missing only one, due to injury. She also has the best club form at outside back of anyone in the U.S. pool and would have been the perfect back-up for Crystal Dunn and the oft-injured Kelley O’Hara. Yes, Krieger should be able to fill that role as well, but the other two back-ups at outside back, Emily Sonnett and Tierna Davidson, are both natural center backs and have struggled when given minutes out wide.

Ellis’ decision to leave both Zerboni and Short off the roster are even more difficult to understand in the context of including Long and McDonald. Long fails to offer the team anything that can’t be provided by Horan, Mewis, or Brian. McDonald, despite being the feel-good story of the roster, is the seventh player on the depth chart in a three-forward system and likely won’t see a minute of competitive action.


There’s absolutely no doubt that the U.S. roster is stacked with talent and, if healthy, good enough to win the World Cup this summer in France. However, tournaments are not won solely by a team’s first XI.

In at least two positions, Ellis has left herself without enough cover should injuries or other circumstances force the U.S. team to adjust from its preferred starting lineup.