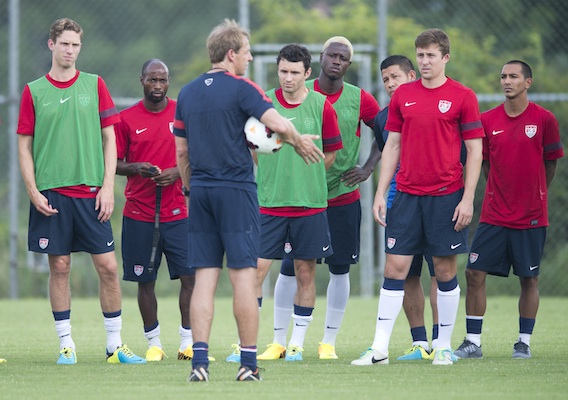 Any way you slice it, the United States should seize control of today's match against El Salvador and earn a berth in the semifinal round of the 2013 Gold Cup.
BY John Godfrey Posted
July 21, 2013
12:27 PM

FIFA RANKINGS, like so much about the scandal-plagued organization, warrant a healthy dose of suspicion. But the CONCACAF rankings at right should provide at least some perspective in advance of Sunday's Gold Cup quarterfinal match between the United States and El Salvador (4 p.m. Eastern, FOX). The U.S., riding an eight-game winning streak, is ranked 2nd in the region and 22nd in the world, and both numbers should improve when the list is updated August 8. El Salvador, currently ranked 94th globally, is just not very good. La Azul y Blanco may be better than Suriname, as the ratings indicate, and El Salvador has a stronger soccer tradition than, say, Antigua & Barbuda. But the Central American nation is roughly equivalent to the Guatemala team (93rd) the Americans dismantled, 6-0, a few weeks ago in San Diego. Anything short of a dominant win will be disappointing to Jurgen Klinsmann and his charges. You get a sense that the team knows that. “We are playing for a championship," team captain DaMarcus Beasley said. "This is something that we can achieve as a group, a chance for these 23 guys to do something special as a team together. The guys know that. We have some young guys, some inexperienced guys, and guys getting their first caps and first goals. For us, it’s a group that has a lot of potential." "No one here is focused on trying to make a World Cup roster," he continued. "All we are worried about is trying to win a Gold Cup final.” Even if that second statement is a bit dubious—everybody on the squad has the 2014 World Cup in mind, if only in private—the fact remains that this team is playing well, and playing for each other. “It’s a great atmosphere in the group now,” Mix Diskerud said after Tuesday's 1-0 win over Costa Rica. “Coming into the locker room now everybody is happy and smiling and supporting each other. People have their lucky socks and their lucky boxers, and I think it’s all just working for everybody.”

CLICK HERE FOR A COMPLETE ANALYSIS OF EL SALVADOR
Whether players are motivated by hoisting a Gold Cup trophy, winning for each other, or fighting their way onto the 2014 World Cup roster, it shouldn't really matter for Sunday's quarterfinal match. The stats, history, and trends all favor the Americans: