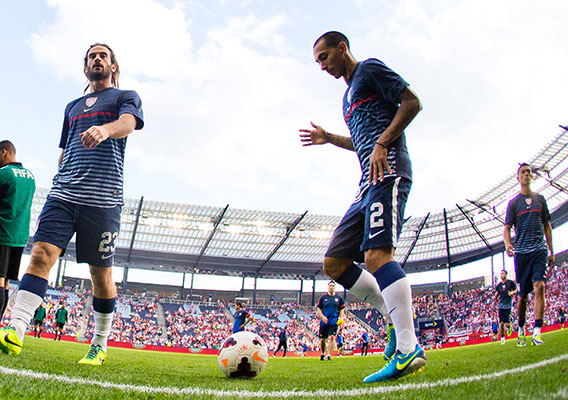 The Club Tijuana left back has had an up-and-down run with the U.S. national team, but Castillo's recent strong play, combined with some teammate injuries, have created an opportunity for the skilled defender.
ASN Slideshow

BY Brian Sciaretta Posted
October 23, 2013
10:00 AM
Editor's Note: Click on the ASN Slideshow at right for a look at Edgar Castillo in action.
EDGAR CASTILLO KNOWS he has a battle ahead of him. With World Cup qualification completed, the United States national team will now shift focus to important friendlies in November—two matches where many players will try to make a case to be part of Jurgen Klinsmann’s plans for Brazil next summer. For Castillo, a promising fringe player on the national team, the opportunity is there: He is coming off two solid performances in the October qualifiers that demonstrated his promise but also highlighted that more work is yet to be done. “I haven’t been playing much the last few call-ups since Beasley has been doing a good job,” Castillo told American Soccer now. “I came in for him in the first game. I got to start the next game against Panama. Good thing we won but it was a tough game. It was good getting minutes.” In the first October qualifier, against Jamaica, Castillo came off the bench in the second half with the U.S. mired in a sluggish 0-0 draw. He helped create Graham Zusi’s opening goal for the U.S. and then assisted Jozy Altidore for the second. He nearly scored a goal of his own in the final minutes of the 2-0 win. Against Panama, Castillo earned the start from Klinsmann. The first half, however, was a struggle for Castillo has his turnover led to Panama’s opening goal. In the second half, however, Castillo found his way back into the game and was consistently dangerous, helping the U.S. to a stunning 3-2 win. While he is established as a change-of-pace option coming off the bench, the the next hurdle for Castillo will be to show Klinsmann he can be a consistent player across 90 minutes. It's not an insurmountable goal. Castillo is already a regular starter for Tijuana, where he has featured in important games in the Copa Libertadores, the Liga MX playoffs, and in the CONCACAF Champions League. Castillo believes his early struggles with the national team are a result of nerves and his burning desire to impress. “Against Panama I was a little shaky in the first half,” Castillo said. “You get nervous. I hadn’t played in awhile for the national team as a starter. You get nervous. But I think I did much better in the second half. That’s when we had more chances to score and when we tied and won the game. I’ve been playing better in the second halves when you have a rhythm and the game has a flow. I think’s why I’ve been playing like that.” “I think if I’ve been playing regularly on the team, that wouldn’t be an issue," Castillo added. “But I get a little nervous. Nerves happen but they go away as the game goes by.” By the end of the game against Panama, Castillo was moving into the attack with ease and his best play was one that earned him many accolades in Mexico. In stoppage time he started the play that resulted in Zusi’s dramatic equalizer—the goal that kept Mexico's World Cup hopes alive. Castillo insists that helping Mexico was the furthest thing from his mind, but afterward he was happy to hear that El Tri was not eliminated. Born in New Mexico to Mexican parents, Castillo played for Mexico’s youth teams and for the senior team in friendlies. It wasn’t until 2009 when he filed for one-time switch to play for the United States. When he returned to back to San Diego and Tijuana, he realized how important it was for Mexican fans. “That’s good for them," he said, referring to the Mexican national team. "I wish them the best and I hope they make it to the World Cup. Fernando Arce plays with [me on Tijuana]. He just told us that we played well. He also thanked us about that." "All my family is Mexican-American, and they were happy. It was the same with my friends in San Diego and Tijuana. But I didn’t say much. What are you going to say?” Jurgen Klinsmann has plenty to say about Castillo, a player he clearly admires. "Edgar is another player who’s matured a lot over the last two years,” Klinsmann said following the World Cup qualifier against Jamaica. He's "playing week-in week-out in Tijuana, in Copa Libertadores last year against big South American teams, in CONCACAF Champions League. It’s good to know he can come in, create stuff." The November friendlies could be another important opportunity for Castillo to show what he can do, especially with the team’s other left backs struggling with health and fitness issues. DaMarcus Beasley suffered a leg injury during the most-recent international break and Fabian Johnson, who is a left back but now mostly used as a midfielder, is battling an ankle injury. Their pain could be Castillo's gain. “I’ve showed myself well and that all the call-ups I try to do my best every game whenever I’m needed,” Castillo said. “It’s going to be hard to make the final roster because there are a lot of good players. We’re a good team already. We just have to fix a little defending and I think we can make a good run in Brazil." "I think we’re going to do a good job there.” What do you think of Castillo's prospects with the national team? Would you like to see him starting in Brazil? Tell us in the Comments below. Brian Sciaretta is an American Soccer Now columnist and an ASN 100 panelist. Follow him on Twitter.