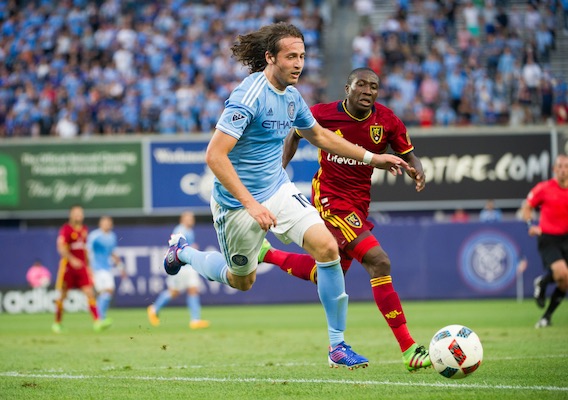 The 2017 MLS season is just a few months away, and all 11 teams in the Eastern Conference have needs to address in the days and weeks ahead. Here is Brian Sciaretta's assessment.
BY Brian Sciaretta Posted
January 03, 2017
2:40 AM

JANUARY IS ALWAYS an important time for Major League Soccer teams as they evaulate needs, assess talent prior to the MLS SuperDraft, and build rosters for the coming season. Here's a look at how the Eastern Conference teams are shaping up as this busy window opens up.

The New York Red Bulls' offseason will be a bit shorter than usual as CONCACAF Champions League play begins in February against a beatable Vancouver Whitecaps team. Jesse Marsch's squad has disappointed in the playoffs over the last two seasons but don't blame the midfield for that: Dax McCarty and Sacha Kljestan lock things down in the middle and are supported by the best group of wingers in the league: Mike Grella, Gonzalo Veron, and Alex Muyl.

This team has to address its needs in central defense. Two years ago the Red Bulls had Matt Miazga and Damien Perrinelle, one of the best tandems in MLS. The Red Bulls never adequately replaced Matt Miazga and Perrinelle has never looked like himself after tearing his ACL. Aurélien Collin joined last year and provided some help, but far more is needed in the back.

The team could also use some help at fullback and should secure a quality backup for Bradley Wright-Phillips.

New York City FC made the playoffs for the first time in 2016 but that accomplishment does not look as great in hindsight after an embarrassing 7-0 aggregate loss to Toronto in its opening series.

So what does this team need? First of all, it needs youth in the midfield. Frank Lampard is gone, and it's a safe bet that his replacement will be at least a few years young. It needs better passing in the final third and the best step would be to build around Tommy McNamara and Jack Harrison.

NYCFC also has to make a decision on Mix Diskerud, who is way too expensive to be a rarely used bench player. Is he part of Patrick Vieira's plans? If not, how do they unload him?

Of course David Villa was outstanding in an MVP season but there was a huge overreliance on the Spaniard. It was not that Villa scored, but he also created for himself and others. Take him out of the equation and things look bleak for NYCFC.

Toronto FC enjoyed an outstanding playoffs run, especially on the offensive side of things, before being inexplicably shutout at home in MLS Cup. That being said, the Canadian club has pretty good prospects heading into 2017. It does need more creativity in the midfield beyond Sebastian Giovinco and Michael Bradley needs to be healthy for most of the season. How will the team’s young players, especially Marky Delgado, step up?

In 2015, the lack of defense was the team’s downfall. In 2016 the club added veterans Drew Moor and Steve Beitashour, and both moves paid dividends. In 2017, adding more defense should still be a top priority—particularly trying to go younger.

Heading into 2016 most pundits thought that Didier Drogba would define the team's destiny—but it didn't exactly play out that way. Ignacio Piatti dominated the club, and much of the league, while Drogba was an inconsistent presence in the squad.

With Drogba now gone, what next? The addition of designated player Blerim Dzemaili into the midfield should help. Last year Montreal was reliant on the counter attack through Piatti but adding more possession will only help. Montreal does have talented defenders but Toronto steamrolled through that backline with ease in the playoffs. More possession should alleviate the pressure on its defenders.

Goal scoring could see the most changes. Dominic Oduro is as streaky as you can find. Matteo Mancosu was sharp in the playoffs but is he ready to be the team’s main option up top? It will be interesting to see if Montreal goes out and signs attackers, drafts them, or promotes youngsters from within.

Three developments killed the Philadelphia Union in 2016: Vincent Nogueira’s abrupt departure, the inability of Maurice Edu to return to the field, and C.J. Sapong’s goal-scoring drought. These absences overshadowed the acquisition of Alejandro Bedoya, who brought a veteran presence to the team.

The absence of Nogueira and Edu was devastating because both were crucial in the deep midfield to play in front of the young defenders. With Edu uncertain for 2017, defensive midfield help is an absolute emergency for this team so that Keegan Rosenberry, Josh Yaro, and Auston Trusty aren't exposed game after game.

Philadelphia has only made the playoffs twice in its history and it has never won a postseason game. Securing a quality defensive midfielder and/or a box-to-box midfield is high atop the to do list. After that, it will need to add another forward because right now Sapong and Charlie Davies are simply not enough.

It's hard to get a good read on what the New England Revolution are doing. Last year it was clear that the team needed defense more than anything else. Its attack was actually pretty good and with Juan Agudelo, it was set up top.

So what did the club do? Trade for another forward in Kei Kamara who plays almost the exact same position as Agudelo.

So right now, the team still badly needs defenders and it has gotten so thin in the back that it is going to be near-impossible to fix it in just one offseason. It needs lots of central defenders. Without one of the top picks, the draft is always a risky way to address weaknesses.

The top priority for D.C. United right now is to sign Ian Harkes as a homegrown player. The son of former U.S. national team captain John Harkes is the top talent coming of college and he has a huge upside. Coming out of Wake Forest, Harkes rarely turns the ball over and could provide a much-needed boost to United's possession game. The problem for Ben Olsen's team is that Harkes is considering playing in Europe to start his career.

D.C. United also has the potential to sign central midfielder and occasional U.S. U-20 captain Eryk Williamson as a homegrown out of Maryland. Although like Harkes, Williamson has told numerous media (including ASN last summer) that he is eying Europe.

Both Harkes and Williamson could address key needs. Right now, there are some positive things going on in D.C. as the move to a new stadium draws closer. It has a very good goalkeeper in Bill Hamid, it brought back Steve Birnbaum and Luciano Acosta, and Patrick Mullins is very promising up top.

The problem is that competing with Europe for Williamson and Harkes is going to be tough.

Despire a hugely disappointing run in 2016, the situation is not that bad in Columbus. Michael Parkhurst is gone and Gaston Sauro is out for 2017. But the new addition of Ghana national team defender Jonathan Mensah has the potential to be huge.

Steve Clark is gone but former U.S. U-20 standout Zach Steffen is a promising replacement.

The team is attempting to look for more creativity with the potential addition of former U.S. youth national team Junior Flores from the reserves of Borussia Dortmund but he is still very unproven. Despite signing for Dortmund, Flores failed to make any real progress there and has a history of getting cut from U.S. youth teams.

So what does the team look like right now? There is a lack of width and a ton of needs at the moment. There should be concern about the number of holes that need to be filled. Who are the fullbacks and wingers?

With a new stadium coming, this franchise has a lot of work to do if it wants to compete in 2017.

While FC Dallas has set the MLS standard in emphasizing youth, Chicago appears determined to follow a similar path. Head coach Veljko Paunovic, who won the U-20 World Cup with Serbia, and academy boss Cedric Cattenoy, formerly in charge of Paris St. Germain's academy program, are running things in the Windy City.

This team has been short on talent for years but there have been some very promising developments. Hungarian forward Nemanja Nikoli? is a new designated player who should boost the offense playing alongside David Accam.

Last year the defense featured rookies Brandon Vincent and Jonathan Campbell, and both should raise their games in the year ahead. Central midfield was also significantly improved with the acquisition of former Los Angeles Galaxy star Juninho, on loan from Tijuana.

It's fair to ask whether or not these veterans are going to crowd out the youth movement but leadership is needed in terms of how to blend a roster. Even FC Dallas gives playing time to its older players.

But what Chicago needs now is production from its homegrown system.

Atlanta United has made a huge splash ahead of its debut campaign. Tata Martino is one of the most high-profile head coaches to come into the league—although he has disappointed at times in the past. Miguel Almiron, 23, is a massive designated player signing while Hector Villalba, 22, is not shabby either. Atlanta is spending money on young foreign talent—an admirable course of action that is likely to pay off.

Andrew Carleton has a tremendous upside—even though he's just 16-years-old—and U.S. U-20 forward Brandon Vasquez could be in a nice environment there to break in professionally.

In the backline, Atlanta has made smart but unspectacular signings with Greg Garza, Zach Loyd, and Michael Parkhurst.

Clearly more is expected from Atlanta than a typical expansion team but compared with New York City FC, it is going about its business in a far more exciting manner by adding youth and talented Americans.

But if this team really wants to compete right out of the gates it will need to establish defensive depth and fill a sizable gap in central midfield. Chris McCann and Jeff Larentowicz are not the answer.

Atlanta has a coveted asset with the second overall pick in the draft. Might Technical Director Carlos Bocanegra consider trading that pick away in order to obtain an asset that can help the club right away? It's entirely possible.

Share your take on Brian's take in the Comments section below.