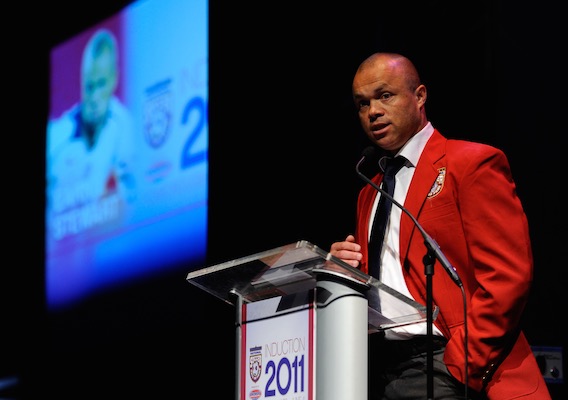 The former U.S. international looks to bring his dual-national mindset to the Philadelphia Union, an MLS franchise that has struggled to accomplish much during its brief run in the American top flight.
BY Brian Sciaretta Posted
February 04, 2016
6:00 PM

EARNIE STEWART SPENT his first five years of “retirement” as the technical director for two of his old teams in the Netherlands—VVV Venlo and then NAC Breda. In 2010, that experience led him to be named director of football affairs for Eredivisie side AZ Alkmaar. By 2015, he had built the club into one of the Dutch league’s strongest—a European qualifier, even—and himself into a prime candidate for a job at any of the top clubs on the continent.

Then he left it altogether.

“They ask me what my next club is going to be and [are] expecting me to say a big club in Holland or Europe,” Stewart told American Soccer Now. “I’ve always had an ambition to come back to the United States and be a part of U.S. Soccer and creating something long and lasting. I do feel they’re on the verge, and maybe even further than that, and I’d like to help.”

In late October, Stewart, 46, was named as Philadelphia Union’s new sporting director effective Jan. 1—marking a return both to the country he represented in three World Cups and to the league in which he spent the twilight of his career with D.C. United.

Stewart, who calls Abby Wambach’s recent comments on foreign-born players “very disrespectful,” was born in the Netherlands to an American serviceman father and a Dutch mother. That identity for Stewart is reflected strongly, too, in his approach to the game.

“In the end, it all goes down to the choices that you make,” Stewart said of Beane’s methods. “Not only the scouting process of seeing a player and believing in a player and having a gut feeling but really evidenced on why you bring certain players in, and do they fit into your system? Do they have the right character? The more information and background you have on a player, the better your choice is going to be.

“The whole idea that Billy has in his thoughts [is that] he wants, as I do, to not make any mistakes, or as few as possible. In the end those mistakes cost money. That’s the whole philosophy. And as long as you make sure it is as evidence-based in what you do and the players you bring in, the chances are you are not going to make as many mistakes. And that’s a big part of the job.”

His assignment with the Union, it seems, will be especially challenging.

In six seasons since it began play in 2010, Philadelphia has made the playoffs just once, when it was bounced from the first round in 2011. Along the way, homegrown players have stagnated, inaugural coach Piotr Nowak has gotten himself into an embarrassing lawsuit over the hazing of young players, and the organization has overall lacked a clear direction. Despite all of theat, Stewart believes, “everything is here to be a good MLS team and be in contention for a playoff spot,” but he acknowledges that progress for Philadelphia “hasn’t come as quick as the rest of the organizations around the league.”

One of Stewart’s earliest tests back stateside was the 2016 SuperDraft, which by most accounts was a success. Te Union selected Georgetown defenders Josh Yaro and Keegan Rosenberry No. 2 and 3 overall. But Stewart has plenty to consider as far as where to go from here: MLS sporting directors and general managers, after all, have implemented a wide range of strategies when it comes to filling out their rosters.

Asked about the decidedly anti-Moneyball tactic of signing big-name but aging stars like New York City FC, Stewart quickly says, “I don’t think that’s us.” Oscar Pareja’s academy-based mindset, which last season yielded FC Dallas a Western Conference title, is a different story. Stewart calls the development model, in fact, the reason “why they brought me here” and insists he wants all players regardless of age to improve at Philadelphia.

For now, however, it seems likely that in the future, Philadelphia will be a team eager to play its younger players.

“We want to be a club known for its development,” Stewart said.  “Hopefully several years down the road, kids will be saying, ‘If you want to be developed and take the next steps in your career, Philadelphia Union is the place to be.’ ”

Stewart wants to “make a difference,” he says, and he certainly seems in every position to make one. Many foreign coaches and front-office officials have struggled to adapt to Major League Soccer and its quirks.

“If you want to come here and have your own philosophy and think that is going to be a success, that is not going to totally work because you do have to work within the culture that there is here,” Stewart explained.

On the other hand, many American coaches have struggled in other areas, with academies a prime example. Stewart, with his high-level European experience in building a team and his thorough understanding of MLS and the American way, will look to sidestep both obstacles. He likes his starting point, adding that from what he sees at the academy, “the talent is there.”

Call it “the best of both worlds.” Call it Moneyball. Call it a promising hire.