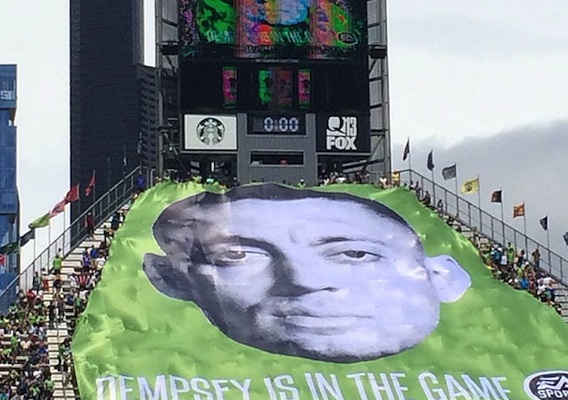 EA for Dempsey; NBA for Howard; Bosox for Cameron

Following their escape from the group of death in Brazil, U.S. national team players enjoyed the hero treatment all over the place—at the ESPYs, at Fenway Park, and even at the bank.
BY Justin Churchill Posted
July 21, 2014
3:29 PM

Congrats @mbesler and @gzusi on your new deals!!! You boys deserve it!

What an honor it was tonight to throw the first pitch at the @redsox game! #boston #bostonstrong… http://t.co/RRltw0xt8T

Not sure what all of that means, but he makes the list anyway.

#SCtop10 play of the day new @SoundersFC signing @xbailey_17 making his 1st appearance for the club! Let's get him on ESPN! RT

Will be interesting to see if Shea can get some preseason playing time....

The German-American could be a star in MLS. It needs to happen, right?

Losing to Tim Cahill isn't that bad though.

I lost at the #ESPYS to @Tim_Cahill but I did win the.... Actually I didn't win anything. Feeling like a #sidepiece ????

Captain America continues to make the rounds. Imagine what would have happened if the Yanks had been on the front foot for 120 minutes against Belgium.

Best to avoid James Dolan at all costs, Tim.