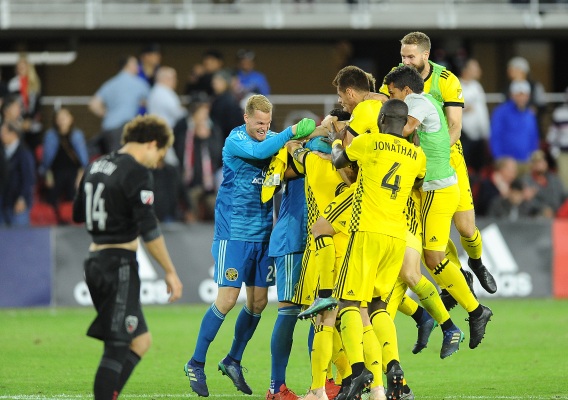 It was the best of times and the worst of times in the MLS knockouts with some great games and some bad ones. Thankfully for the fans, Thrusday's games were memorable and provide a great springboard into the Conference Semifinals.
BY Brian Sciaretta Posted
November 01, 2018
9:00 PM
THE DIFFERENCE between the MLS knockout games on Wednesday and Thursday as about as stark as it could possibly get. Wednesday’s games were drab, low energy, poorly attended, not well played, and boring. Thursday, was one of the best days in MLS playoff history.

Here’s to hoping for more of the latter and less of the former.

To go into slightly more detail, Wednesday had two teams in Philadelphia and FC Dallas who were falling apart at the end of the season and completed their collapse in the first half of each of their respective playoff games.

Games at Yankee Stadium continue to be a black mark on the league – and the league deserves it for allowing a team into the league based on murky promises (did anyone really believe they would be out of Yankee Stadium in three years?). In that sense, it’s too bad the stadium will continue to be relevant in the later stages of the playoffs as Philadelphia crumbled in its 3-1 loss.

Meanwhile, the scene at Toyota Stadium in Frisco for FC Dallas was embarrassing. And the no shows turned out to be the real winners by not having to spend their Halloween night watching Dallas lose its fourth in a row to mercifully end its season at the hands of Portland. FC Dallas has typically only been able to go as far as Mauro Diaz was able to take it. Replacing him is key.

Fortunately for MLS and its fans, Thursday brought two epic games in electric atmospheres full of some real impressive quality.

Audi Field in DC made a wonderful playoff debut and it has been ages since DC United had such an electric atmosphere at its games. While DC United came up short in the shootout, things are clearly moving in the right way DC. The game against Columbus was riveting with dramatic goals and end to end action. Both teams went for it - which is not always the case in knockout games.

Meanwhile in LAFC, the atmosphere was electric although crowd behavior wasn’t ideal with ugly chants and beer bottle tossing forcing a five minute suspension of play. Damir Kreilach scored two goals. The first coming off a first-rate cross from Brooks Lennon and the second was a goalazo that will be played in league highlights for years to come.

RSL somehow advanced 3-2 but it was a very good first season for LAFC who will certainly be a viable contender in the years ahead.

Here are some detailed thoughts


Zack Steffen’s performance against Columbus wasn’t perfect but it reflected very well on his mentality. He was responsible for DC United’s opening goal when he failed to hold on a cross.

But mistakes happen for any keeper. The real test is bouncing back from it and making key saves the rest of the way. When some keepers make mistakes, they quickly lose confidence and fall into slumps. Steffen was really solid the rest of the night.

His performance in the shootout – where he stuffed Rooney right off the bat - showed just how good he is in those situations. U.S. national team fans should not fear shootouts with Steffen in goal.


.@zackstef_23 has faced 11 PKs in his 6 MLS Cup Playoff games. Only 4 were converted. He's saved PKs from players from Argentina (2), Germany, Spain, and England.

But his athleticism, quickness, and confidence gives him all the tools needed.

In Portland, all the talk is on Diego Valeri – and why not? He has been one of the best players in league history.

In terms of young players emerging in this big games, Jeremy Ebobisse is filled that role in the early season. The 2017 U.S. U-20 World Cup forward saw occasional minutes this year but really looks as if his game is improving quickly. On youth national teams, he looked lost against tough opponents but he has worked hard on his game and has come a very long way.

Against FC Dallas, Ebobisse started and went 85 minutes. He assisted on Valeri’s second goal and his hold up play was effective throughout. It is a positive development for both Portland and the U.S. U-23 team which needs a growing domestic player pool with Olympic qualifying less than a year away.

Real Salt Lake is very lucky to be in the playoffs. It took a miraculous away win by the Houston Dynamo over the LA Galaxy on the season’s final day just to give them the final playoff spot. Credit to Mike Petke and his team for taking advantage of luck and turning in a wonderful performance in a 3-2 away win over LAFC.

In the opening goal, this play from Brooks Lennon was simply first-rate class – both in his hustle to get to the ball and then his delivery of the cross to Damir Kreilach.


This hustle & cross from Brooks Lennon is just a great play. pic.twitter.com/VjnH4eF519

The game’s drama was enhanced by two great goals from LAFC, including this one from Christian Ramirez.

But the defining image from the first round of the playoffs came from Kreilach again who scored a second goal that will be replayed on sports shows throughout the week.

Overall, it was the perfect end to a very great night of soccer for the league and its fans. It helped erase the terrible games on Wednesday and it set the stage for Sunday’s Conference semifinal first leg games. 4

A look ahead to Sunday


The winning teams from the knockout stage will not have much rest and will have to now quickly get ready to take on tougher opponents who are also well rested. Here is a very quick preview:

Columbus Crew vs. New York Red Bulls: It will be anyone’s guess how Columbus finds the energy to play well in this game after going 120 minutes on Thursday, but adrenalin can be a powerful thing in sports. To make it tougher for Columbus, they will also likely be without Pedro Santos too. The Red Bulls like to press and that should make it even harder for a tired Columbus team. All the pressure, however, will be on the Red Bulls to win and score away goals and use their backline to take Zardes, Higuain, and Meram out of the game. With Columbus advancing, however, the #SaveTheCrew campaign will make them the sentimental favorite.

Portland Timbers vs. Seattle Sounders: It is a dream for MLS to have two archrivals meet in the playoffs for a two-leg semifinal. Seattle has been the hottest team in the league in the second half of the season but has not beaten a playoff-caliber team in months. Portland will be its toughest test and a hostile crowd awaits Seattle. While Seattle no doubt has a ton of playoff experience after two straight trips to MLS Cup, Portland has a good chance at an upset.

New York City vs. Atlanta United: Atlanta United was the talk of MLS for most of the season but Tata Martino’s team really showed weaknesses in the final weeks of the season. It was soundly defeated by the Red Bulls, it scrapped by a few lesser opponents, and then was destroyed by Toronto FC on the road in the season finale. The pressure is all on Atlanta to avoid an embarrassment in the playoffs. By playing in Yankee Stadium is really hard given its poor field and unusual dimensions. Atlanta cannot let the game get out of hand in New York and return home needing multiple goals. Unfortunately with David Villa on NYCFC and Atlanta not playing top soccer, there is real danger here for United.