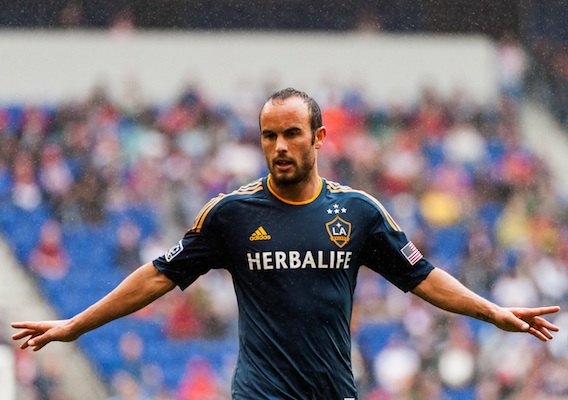 Mix Diskerud, Josh Gatt, and Will Bruin are some of the more intriguing names Klinsmann included on his roster for this tournament, which runs from July 7-28 at a number of stadiums across America.
BY John Godfrey Posted
June 27, 2013
11:12 AM
Jurgen Klinsmann announced his 23-man roster for the 2013 Gold Cup on Thursday, and it features a mix of familiar faces as well as some players looking for their first United States caps. “It’s kind of a roster where you have to go player by player and evaluate each situation to see where they are at and see how strong they are, but we are excited about a roster for the Gold Cup that really has a shot of winning it," Klinsmann said. "This tournament gives us a huge opportunity to see where a lot of the players are. Even though we don’t have the European-based players that were part of our World Cup Qualifying process, we put together the strongest team possible for this huge opportunity at the Gold Cup." The team features 10 Major League Soccer players, who will all miss extended action with their clubs if the U.S. advances to the final in Chicago on July 28. "We had talks with MLS before the summer about how we would handle using MLS players for these two different camps," Klinsmann said, "and through those great discussions we compromised so we have access to all the MLS guys that were part of the World Cup Qualifying games if we need them for the last stage of the Gold Cup.” Landon Donovan, who opted out of the U.S.' January training camp and instead took a long vacation in Asia, headlines the squad. Donovan was left off the World Cup roster that played, and won, three matches this month. The Gold Cup is viewed by many as the penance he will have to pay to earn his way back into Klinsmann's good graces. Interestingly, Donovan is listed at forward on the roster, which may give an indication of how Klinsmann intends to use him, or not. “When Landon came back in the end of March after the long break, he needed time to get back in a rhythm, get back in shape and work on his game again," Klinsmann said. "I think now the process is on a good roll. He’s getting sharper every game and every week. We’ve watched his games and believe now is a good time to get him back into the National Team and give him the opportunity to prove his point." "He knows that the group that played the World Cup Qualifiers is ahead of the curve and have a very strong position right now, and that he’s been observed by us and has to rebuild his case," the coach continued. "We have all respect for what he has done in the past, but sports are about the present and about the future, and that’s what we are building on." Stuart Holden, recovering from a major knee injury, also made the team. A regular first-team selection for the Americans and a rising star in England before he was injured, Holden should play a prominent role in the tournament, which begins July 7. Here is the roster: GOALKEEPERS (3):