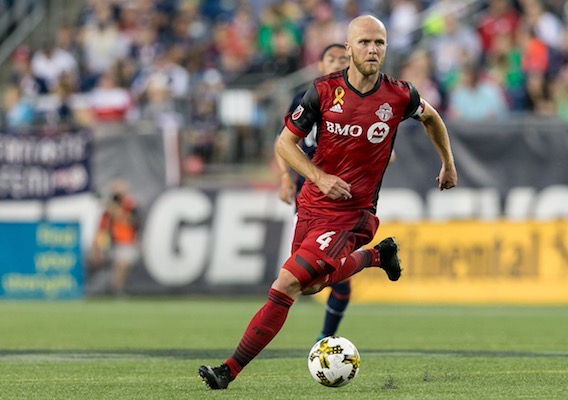 Toronto overwhelmed the Seattle Sounders to become the first Canadian team to ever win MLS Cup. In doing so it completed a historic treble by winning MLS Cup, the Supporters Shield, and the Canadian Championship. ASN's Franco Panizo was in Toronto
BY Franco Panizo Posted
December 09, 2017
3:10 PM
TORONTO – A dream season for Toronto FC ended with a historic achievement: winning a first MLS Cup title to complete an unprecedented treble.

Jozy Altidore and Victor Vazquez each scored in the second half, as Toronto FC defeated a subpar Seattle Sounders side, 2-0, in the 2017 MLS Cup Final on Saturday night. The narrow victory at a chilly BMO Field gave Toronto its third significant trophy this year, making it the first MLS team to record a treble following the captures of the Supporters’ Shield and Canadian Championship.

The triumph also made the Reds the first Canadian side to win the league’s ultimate prize, and came a year after they fell at home to the Sounders in the final.

Prevailing in front of the crowd of 30,584 was a deserved finish for Toronto, who dominated the match from start to end against a Seattle team that only stayed level for as long as it did because of a stellar showing from goalkeeper Stefan Frei.

Altidore, who was named the MLS Cup MVP, netted the winner in the 67th minute. Sebastian Giovinco played Altidore through on goal with a dinked pass into space, and the American striker capitalized by running in between centerbacks Chad Marshall and Roman Torres before clipping a shot over a diving Frei.

Seattle failed to generate much danger and finished the night with just two tame shots on goal. Nonetheless, Toronto got an insurance goal four minutes into stoppage time when a rebound bounced off of Vazquez following an Armando Cooper shot that hit the post.

Frei could do little on that play, but he came up big several times on the night and was one of the sole reasons why the Sounders were even in the match. The veteran netminder recovered nine saves, the majority of which came in the first half.

Toronto FC was all over the Sounders form the start, but struggled to find a way past the exceptional Frei. He stopped Jonathan Osorio’s low, venomous half-volley in the 10th minute, and also denied a high effort from Giovinco by tipping it over the crossbar in the 22nd minute.

Giovinco had another look thwarted in the 11th minute, as Marshall committed a last-ditch tackle to stop a shot from the right that looked like it had Frei beat.

With its midfield dominating proceedings, Toronto kept piling on the pressure. Vazquez nearly broke the deadlock with a hard shot on the ground in the 41st minute, but Frei reacted superbly to get down and stop it.
Frei also prevented Michael Bradley from getting on the scoresheet by blocking a stinging effort in the 59th minute.

Ultimately, however, Toronto found the back of the net, got revenge, and won its first league title to send BMO Field into a frenzy. Altidore struck gold with his quality finish, and Vazquez doubled the lead late to punctuate a historic season and a night that Toronto and its fans will not soon forget.