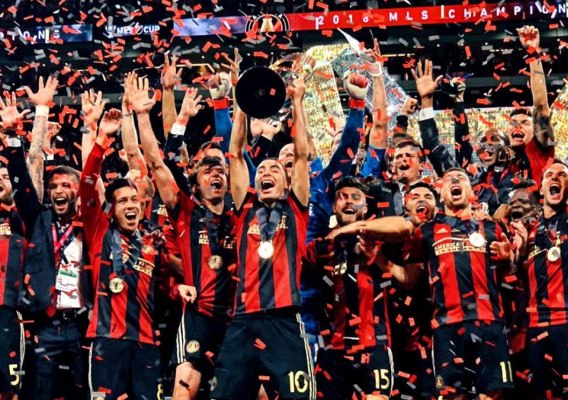 Atlanta United capped its season for the ages in style with a dominant 2-0 win over Portland in 2018 MLS Cup. Brian Sciaretta recaps the game and gives his thoughts on what he saw.
BY Brian Sciaretta Posted
December 08, 2018
6:00 PM
IT WAS A FINAL where Atlanta was expected to win and that is just what it did in a convincing 2-0 win over the visiting Portland Timbers. Overall, Atlanta controlled the game and almost always the more dangerous of the two teams.

After the momentum had been building, the breakthrough came in the 39th minute when Michael Parkhurst forced a turnover in the midfield after a poor touch from Portland forward Jeremy Ebobisse. The ball fell to league MVP Josef Martinez in a very dangerous position in the box. The Venezuelan was kept onside from Larrys Mabiala who was far from the play. Martinez took a dribble around goalkeeper Jeff Attinella.

Minutes later, Portland had its best chance of the game when Ebobisse had a header from close range which forced a great save from Brad Guzan.

Atlanta pulled ahead 2-0 in the 54th minute when Franco Escobar capitalized on a set piece. Miguel Almiron sent a swinging free kick into the box from the left side and about 30 years out from the goal line. The ball found Martinez in the box and his flick-on header landed to Escobar who did not miss from close range.

From there, Atlanta did not make any mistakes and shifted to a more defensive mindset. Portland was able to muster a few shots from distance which Guzan was able to handle.

Martinez was subbed out to a raucous ovation in the 76th minute. His goal and an assist delivered the title to Atlanta and he finished with 35 goals on the season, including the playoffs. In the 90th minute, Almiron was similarly taken out to huge applause from the home crowd which understood that the Paraguayan might be sold in the off-season.

When the whistle sounded, the crowd of 76,019 erupted and it marked the end of what was a special season for a team that captivated a city, performed on the field, and now faces many questions with the loss of its coach and potentially other key players.

But the atmosphere was unparalleled in the history of MLS. It was expected that Atlanta would put on an eye-opening performance and it delivered with an event that rivaled any big game you could find in the United States in any other sport.

Parkhurst gets the trophy


Atlanta United captain Michael Parkhurst had a great game and a great season. It also finally gave him his first MLS Cup of his career. He had played in the final four times (three with New England and once with Columbus) but came away empty. Of course during his European he won a Danish Superliga title and two Danish Cups (which allowed him to play in the UEFA Champions League) but now he can finally lift the highest trophy his country offers.

Parkhurst has consistently always been a winner everywhere he’s been and he’s typically been a captain.

Eventually, he could be remembered as the best American player to never play in a World Cup. Sure Sacha Kljestan and Chris Armas have a legitimate case but Parkhurst has just stood out everywhere he goes with his intelligent style and the way he reads games.


Josef Martinez set records this year with his goal scoring where he became the first player in the history of the league to score 30 goals in a season.

But Martinez was able to raise his game in the biggest games. He wasn’t just a regular-season wonder. He scored against the Red Bulls and he scored and added an assist against Portland in the final. It’s hard to make an argument that this wasn’t the best season any player has ever had in the history of MLS.

Will Atlanta be the same?


The amazing scenes on the field after the final whistle was made even more special because Atlanta United won’t resemble its current form in 2019. Tata Martino is leaving and Miguel Almiron is likely to be sold. Martinez could stay but he might also see bids too.

Atlanta did a great job putting this team together in just its second year. But the challenge for the front office is only just beginning. Can they restock this talented team to continue the momentum? We know Atlanta will spend but will they spend just as wisely?

The 2018 Atlanta United team was special both in how it won the title and how it captured the heart of a big city. But will this success be just a one-off or can Atlanta continue to be a top contender on an annual basis?

The decisions made over the next few weeks will start to give us answers.