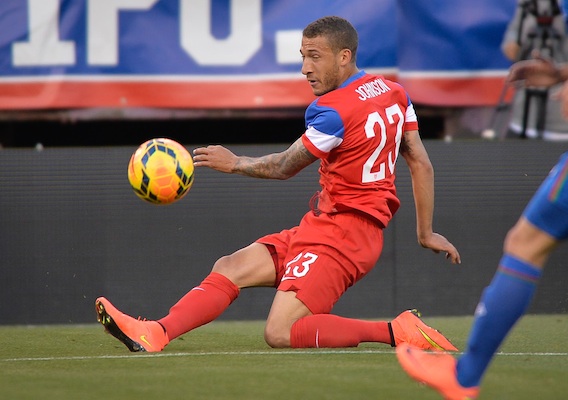 BY Jon Arnold Posted
May 28, 2014
12:08 AM
SAN FRANCISCO—The United States national team’s World Cup send-off campaign started with a victory as the Red, White, and Blue beat Azerbaijan 2-0 here Tuesday night. The decisive play came off a Brad Davis free kick in the 75th minute, which Mix Diskerud got his head on amid a cluster of players. Michael Bradley got onto the ball and rifled in an attempt that was saved off the line by Azerbaijan defender Elvin Yunuszade, but the rebound fell to Diskerud. His shot caromed off goalkeeper Kamran Aghayev and into the net for the first goal in a match that until then had produced little excitement. Aron Johannsson made it a two-goal lead six minutes later when he was left totally alone in the very center of the box and headed in Brad Davis’ corner as though it was a training drill.