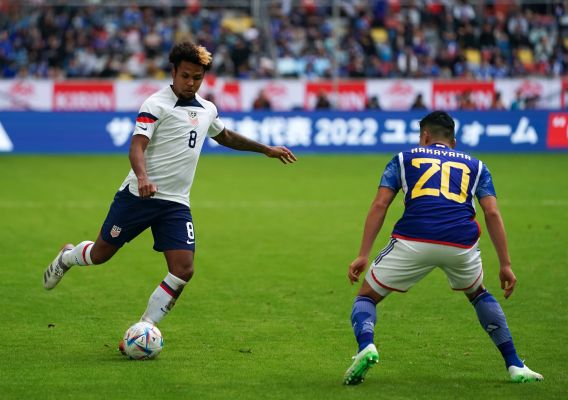 The United States came out flat against Japan and never got into the game. Sloppy turnovers and a lack of chemistry in the attack doomed Berhalter's side on this day. ASN's Brian Sciaretta offers up his thoughts on this game.
BY Brian Sciaretta Posted
September 23, 2022
2:50 PM

THE UNITED STATES NATIONAL team dropped a 2-0 decision to Japan on Friday in what was an ugly and disjointed effort. Goalkeeper Matt Turner was the only one to escape significant criticism and typically an effort where only the keeper plays well is never a good thing.

Gregg Berhalter’s starting lineup was mostly predictable with Christian Pulisic being the only surprise at the winger was scratched for a “knock” he picked  up in training. As a result, Turner was in goal. Sam Vines and Sergino Dest were the fullbacks. Aaron Long and Walker Zimmerman were the central defenders. Tyler Adams, Luca de la Torre, and Weston McKennie were in the midfield. The front line was Gio Reyna, Brenden Aaronson, and Jesus Ferreira.

The first half was ugly, and it was marked by numerous costly giveaways. Walker Zimmerman had a tough pass in the 16th minute at a time when the U.S. was struggling to get the ball out of its own third. Zimmerman lost patience and hit a needless ball into the midfield that was intercepted. McKennie’s had the costliest turnover when his giveaway led to Japan’s opening goal.

The second half saw a wave of substitutions but no real improvement. There was no creativity and no real intensity. While Jesus Ferreira missed the best chance of the game when his header off a Sergino Dest (who was arguably the U.S. team’s best field player) cross went high, his replacement was Josh Sargent who was not able to be part of anything dangerous.

The U.S. team never looked threatening, and its possession lacked purpose. Japan put the U.S. team out of its misery in the 88th minute when Kaoru Mitoma beat Reggie Cannon on the right side and sent a shot past Matt Turner.

There wasn’t a lot to take away from this game for the U.S. team other than it was simply not good enough. Efforts like this in November will be an immediate three and out in Qatar.

Japan is who the U.S. wants to be

When you go back to Gregg Berhalter’s opening press conference at the end of 2018, he said he want to be a team that disorganizes opponents, can press, can counter-press, and attack lethally. Those goals represented the way Japan played this game.

When the U.S. team tried to play like Japan, they turned the ball over. On the other hand, Japan was disciplined and rarely made any mistakes. Defensively, Japan gave the U.S. team nothing to work with while the U.S. team had 57% possession but allowed Japan to have 16 shots. 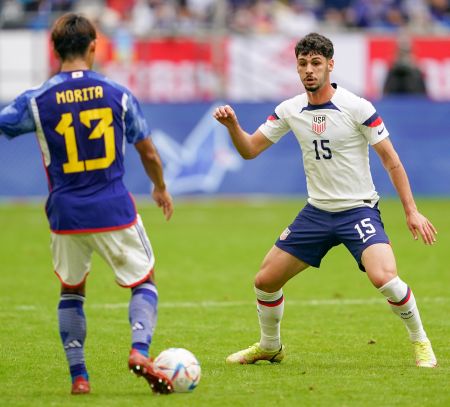 Japan is a good measuring stick in who the U.S. wants to be, and on this day it wasn’t close.

The midfield was a problem

While no one played well, the game was lost in the midfield. The passing was simply not effective and Adams, McKennie, and de la Torre were not able to put pressure on Japan’s backline or defensive midfield.

Adams had a bad game and that was a bit of an anomaly as his typically good for both club and country. McKennie was the biggest concern in the entire game because he one of the U.S. team’s most important players, but he is having a tough start to the season with Juventus. It has been a step down from his first two seasons at the club. There was hope that coming into this game that he could compartmentalize his club struggles and play at his typical level in camp with the U.S. team.

That wasn’t the case. McKennie’s form in the coming weeks at Juventus really needs to improve leading into the World Cup for the U.S. team to succeed. 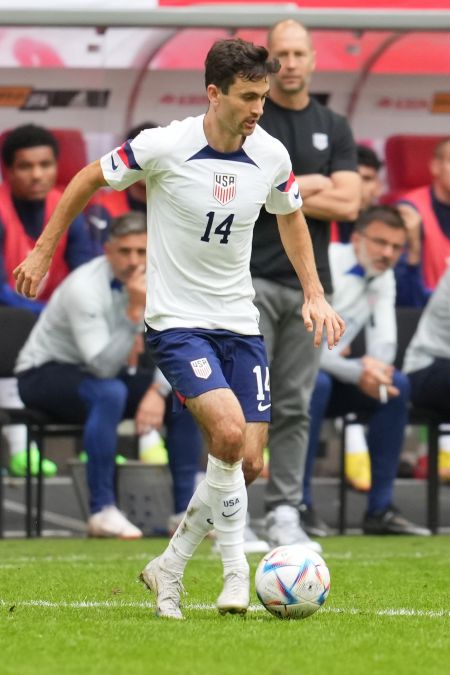 De la Torre is also a major concern. He’s played well for the U.S. team in a couple of different outings but he’s been in tough club situations all year. In the spring, he was a key midfielder for a Heracles team that was relegated. Now he’s on a Celta Vigo team where he doesn’t play. If he doesn’t play well in this camp, he won’t be at a club where that is likely to improve. He is going to continue to ride the bench.

The problem is that de la Torre is a now a key backup to both McKennie and, in this case, Yunus Musah.

Off the bench, Malik Tillman and Johnny Cardoso were not improvements and seem to be more options for the future. In one occasion Tillman failed to get on the end of a Vines delivery in the box.

Moving forward, the midfield is a problem for Berhalter. Ideally, he wants an Adams-McKennie- Musah midfield. McKennie will start but he is not playing well. Then there are questions over the backup for McKennie and Musah. While they play mostly on the wing for the U.S. team, Aaronson, Reyna, and even Pulisic are options centrally. But probably for Musah.  A straight backup for McKennie is unresolved and none of the options look enticing. 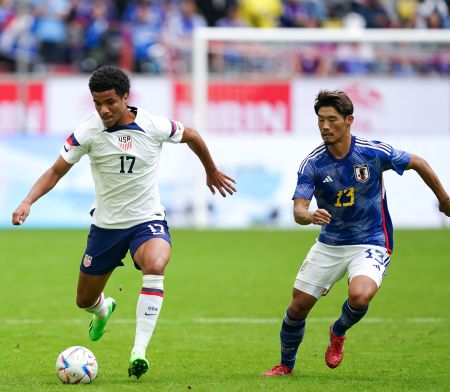 Central defense wasn’t horrendous, but it wasn’t good either. Zimmerman won a lot of duels and was good in the air, but he couldn’t connect on any ambitious passes out of the back – and in one case had a poor turnover that gave Japan a great chance.

Aaron Long has had a mixed season with the New York Red Bulls and that was evident in this game. He only played 45 minutes and didn’t help his game. Mark McKenzie was only marginally better.

Despite the game, Zimmerman’s stock remains high as he can win balls and his aerial ability is among the best on the team. But who should be his partner? Chris Richards is talented and Berhalter rates him, but is he getting the games to have momentum heading into Qatar? He’s been away from the team for so long too. 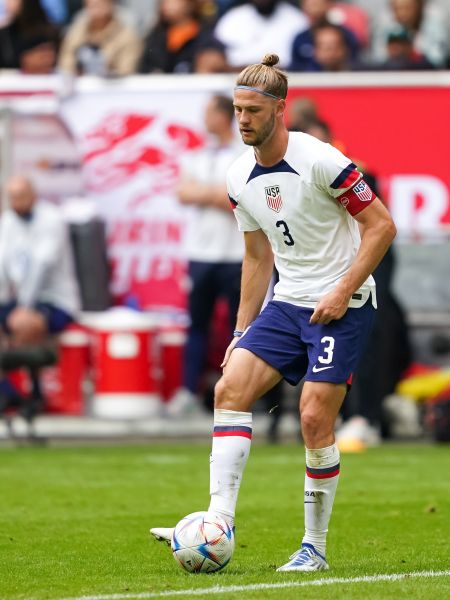 Carter-Vickers (injured for this camp) and McKenzie are good options, but a Zimmerman and Palmer-Brown option might be worthwhile to explore against Saudi Arabia.

In terms of central defenders not in camp, Tim Ream might resurface to give Berhalter someone who is calm on the ball. As a savvy vet, Ream could reacclimate with the team quickly. The John Brooks hurt any chance he had by taking too much time to find a new club and then eventually signing for a team where he isn’t going to play much (he’s played one minute since May 14th).

This game lacked any sort of intensity. It was a terrible replication of a World Cup game with only a few thousand fans at a neutral site game that was far away from either country.

It was a game where the U.S. players, not the environment surrounding the game, would have to raise the level. The U.S. players did not respond well. This game resembled a preseason friendly or a January camp friendly, not one of a well-oiled machine that is putting the finishing touches on its World Cup preparation. Teams this close to the World Cup need to be looking to make a statement and those players on the roster bubble should be playing with desperation.

It puts a lot of pressure on the Saudi Arabia friendly next week. If the team doesn’t play well, lacks intensity, and heads into November with a very poor September window, it will be hard to have any realistic confidence pointing towards success in Qatar.

It wasn’t a good day for anyone who played, aside from Matt Turner who did well to cement his case as the team’s number one. If Turner can end the speculation over who is the team’s starting goalkeeper, it will at least resolve one of the team’s many issues.

Neither Jesus Ferreira nor Josh Sargent helped their case. Ferreira missed his one chance, but Sargent didn’t do well to get any chances. That is going add to the controversy of Jordan Perfok but it is also going to add to the pressure on Ricardo Pepi. If Pepi struggles against Saudi Arabia, he is probably the first one cut out of the three for Pefok.

Berhalter has said that Pefok remains in the running and that he feels he knows what Pefok can do. Coming into this camp, Pefok was in trouble if all three of the forwards succeeded, but if none of them succeed, the odds are much higher he gets back into the team. 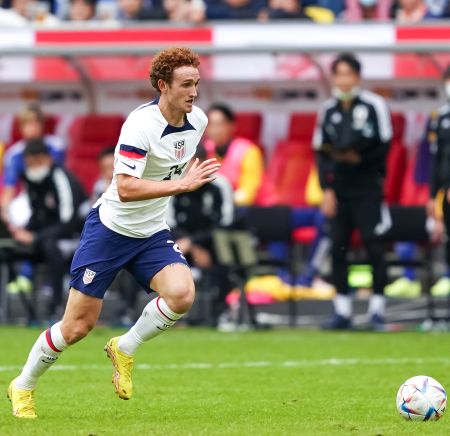 The stockwatch in the midfield is also a concern. De La Torre and Malik Tillman now are under pressure if they get an opportunity against Saudi Arabia, they’re under pressure to perform. Tillman came into this camp in a dicey situation on a wave of poor outings at Rangers. Berhalter acknowledged disappointment in his recent performances. A poor camp probably plays his way off the team.

De la Torre, it will be particularly troubling since he’s not playing at Celta Vigo at all. Cardoso remains one for the Olympics. Like everyone else, he didn’t play well against Japan but a better effort against Saudi Arabia could open the door to passing de la Torre.

At fullback, Dest was important towards creating the best U.S chance of the game. Cannon’s stock dropped with his performance in the second half.

Sam Vines never made any costly mistakes but also wasn’t able to press forward into the attack as much as needed. If he is competing for the back-up left back role, he didn’t help his case although he still has a chance to go to Qatar. It will come down to if Berhalter opts to use normal right backs, Joe Scally or Sergino Dest, at left back against Saudi Arabia, it could bump Vines off the roster. He is the second-best left-footed left back in the pool, but is that enough? It’ll be close. 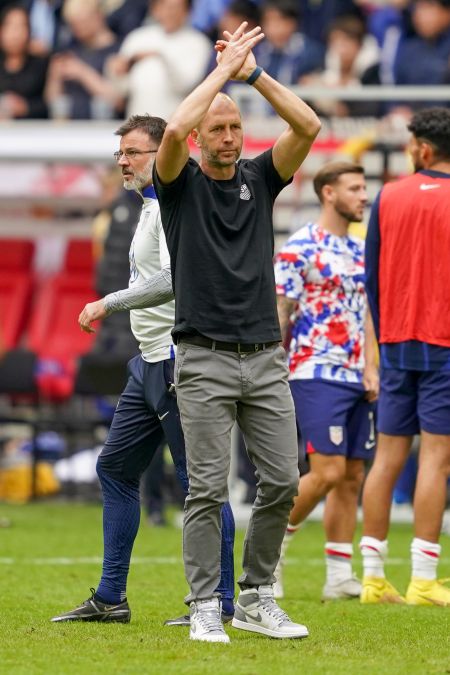 Central defense remains wide open. Zimmerman, his one notable mistake aside, is still going to Qatar. The rest are very much unsettled. Palmer-Brown might have a big chance in the game against Saudi Arabia and he remains the only central defender called up this year playing regularly in the top five European Leagues. The only other playing at such a high level is Tim Ream and his case could be helped this window despite not even playing.

While so much was being said about individual play, that is missing the big picture that the team overall as one unit underperformed in this game. The fact that there are so many questions marks with just one game remaining and Berhalter saying the team “has work to do,” it begs the quesons – first why? Second, when is all this work going to happen? This should be about fine tuning, not trying to find answers.