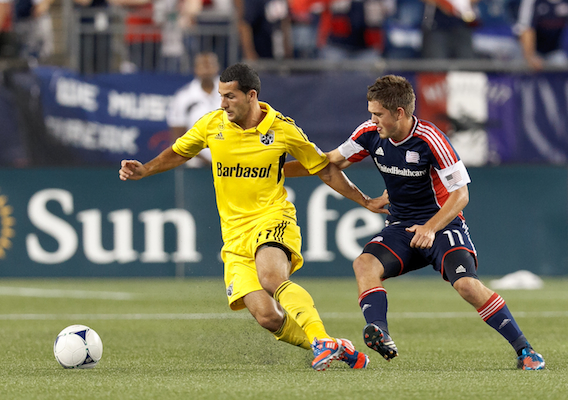 American Soccer Now's Matt Thacker spoke with the new member of the Chicago Fire about his move away from Columbus, his Major League Soccer goals, and his U.S. national team aspirations.
BY Matt Thacker Posted
February 12, 2013
3:19 PM
Dilly Duka cannot wait for the 2013 Major League Soccer season to begin. The former first-round draft pick, 23, was traded to the Chicago Fire after spending three seasons with the Columbus Crew. Duka is expected to compete immediately for playing time, possibly taking the role held by Álvaro Fernández last season, but he is taking nothing for granted. “I’m excited to be a part of this team," the midfielder told American Soccer Now. "They have a lot of talented players and have big names. It’s going to be a tough competition for spots.” Duka, who represented the United States at the 2009 FIFA U-20 World Cup and also played for the U-23 team, knows a successful season in Chicago could get the attention of Jurgen Klinsmann and his staff. “I’m a fan of the U.S. national team, and I watch every one of their games,” he said. “I was part of their youth system, so I’d definitely like to get back at it. The only way I can do that is by playing for a good team, and hopefully, the Chicago Fire do really well this year. If we’re doing well, I’m sure the scouts and coaches are going to be looking.” During his time in Columbus, Duka played primarily on the wing or as an attacking midfielder. However, he insists he has no preferred position and can play almost anywhere on the field. Duka had two goals and five assists in 45 matches for the Crew. Many pegged him to have a breakout season last year, but his progress was delayed by injuries. After returning to health, he became a regular in the starting lineup. He was relegated to the bench for the last five matches of the season, and much was written about a potential falling out between him and head coach Robert Warzycha. Duka downplayed the situation and said the coaches simply wanted him to bring a spark off the bench. “What we did at the end of the season was all tactical. I didn’t look too much into it then, and I don’t understand why people are looking too much into it now,” he said. Duka said he learned a lot during this three years in Columbus but he is also ready to focus on the upcoming season. He believes Chicago has the talent to win multiple trophies this year. “I’m talking about the Open Cup. I’m talking about MLS Cup,” he said. “I want to make strides here and have this club win something.” COOPER, ALEXANDER ON THE MOVE
Duka is not the only potential national team target on the move. The deal also involved Columbus sending Chicago the rights to 25-year-old midfielder Robbie Rogers. The former Crew and national team player spent a year in England with Leeds United and on loan with Stevenage. He left Leeds by mutual consent, and many believed he would return to MLS. It must be said, however, that Rogers seemed less than thrilled about the news of the trade. “Just read my 'rights' were traded to Chicago… Love how the MLS works, pretty funny. #rightlessinthemls,” he tweeted after the deal was announced. Fire head coach Frank Klopas said in a conference call last Monday that they were trying to reach Rogers and believe he’s a “very good player.” However, no update has been given on the situation. The New York Red Bulls were also involved in a couple of trades involving players with national team experience. Kenny Cooper, 28, was traded to FC Dallas, while the Portland Timbers sent Eric Alexander, 24, to New York. What do you think Chicago's acquisition of both Duka and Rogers? Good moves? Let us know below. Matt Thacker (@MattTalksSoccer) is ASN's MLS Correspondent. He runs SoccerPerspectives.com.