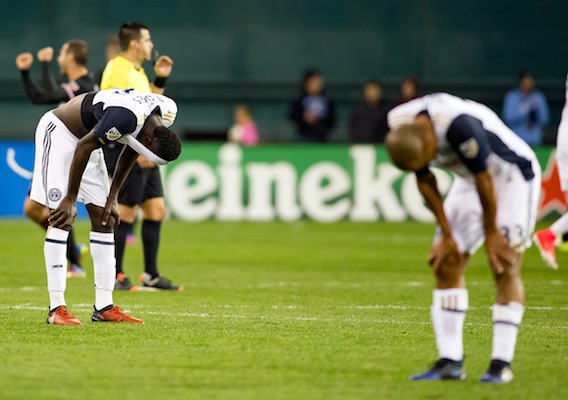 Jim Curtin's team is off to a terrible start in 2017, and things don't get any easier Friday as David Villa and NYCFC roll into town. Elsewhere, Tim Howard will try to let his play do the talking for the Rapids.
BY Franco Panizo Posted
April 14, 2017
6:00 AM

THE MLS SEASON may be less than two-months old, but already the pressure is ramping up on a number of clubs.

The Philadelphia Union, for instance. The Union enters Week 7 of the campaign without a win, and its 0-3-2 record has the team sitting in the basement of the Eastern Conference. Things have been far from pretty across the board for head coach Jim Curtin and his players, and Philadelphia despearately needs three points this weekend in order to put a halt to mounting criticism from fans and media.

From @JeffreyCarlisle at @ESPNFC, confirming that the view of the Union from afar doesn't look any better. https://t.co/wpMk1n1Zcg

To do so, the Union will need to address a number of issues that have been plaguing the team since it last won a regular season match...in August 2016. Primarily, Philadelphia needs to find a way to get more creative in the final third. The club has been too predictable and stale in its 4-2-3-1 formation, and the attack has struggled as a result.

Making things even more complicated is that Curtin is not fielding Designated Player Alejandro Bedoya in his best position. The versatile Bedoya has been used as the central attacking midfielder this year, and while he has shown that he is capable of both scoring and setting up goals, he tends to play his best matches out wide. Bedoya's strongest attributes are his tireless motor and two-way play, but the Union is limiting his impact by asking him to stay so high up the field to serve as the creative force for its anemic attack.

Unfortunately for Curtin and Co., the challenge of picking up its first win since last August will be made all the more difficult by Friday's opponent. New York City FC is making the relatively short trip down to Talen Energy Stadium, and is bringing David Villa and its high-powered attack to town.

Coming off a losing effort that head coach Patrick Vieira labeled as “passive,” NYCFC is sure to have plenty of energy as it attempts to bounce back against a fellow Eastern Conference foe. That means the Union will likely need a big, all-around performance—one that might require Oguchi Onyewu to replicate the 2009 Confederations Cup semifinals outing he had against Villa—in order to put an end to its frustrating and disappointing start to the year.

Here’s a look at the rest of Week 7 of the MLS season.

Toronto FC and Atlanta United produced one of the season's more entertaining back-and-forth affairs this past weekend, and the Ontario-based club might be involved in yet another enthralling encounter on Saturday.

Toronto FC is set to visit Columbus Crew SC in a matchup of teams on the opposite ends of the Eastern Conference, but both sides head into the showdown with their share of intimidating firepower. The Crew has been riding the wave of an in-form Justin Meram as of late, but now has to worry about slowing down the attacking tandem of Jozy Altidore and Sebastian Giovinco that sparkled in Week 6.

The Western Conference also has a must-see clash, as the Portland Timbers welcome Sporting Kansas City in the final match of the weekend.

Led by Diego Valeri and Fanendo Adi, Portland has been the best team in MLS thus far, amassing a 4-1-1 record. Those six matches have seen the Timbers score a league-leading 16 goals, but Caleb Porter’s squad will need to dig deep to find a way to break down a Sporting KC defense that has conceded just twice in five games.

Making the bout more intriguing is that Sporting KC is fresh off a lopsided 3-1 home triumph over the Colorado Rapids. Sporting KC was impressive in almost all facets of that conference meeting, with the Dom Dwyer-led attack showing well and the back-line continuing to look sturdy behind the play of athletic centerback Ike Opara.

Also keep an eye on the Cascadia Cup battle between the Vancouver Whitecaps and Seattle Sounders on Friday. The match pits current Whitecaps striker Fredy Montero against his former MLS side, making for plenty of intrigue as the two clubs try to move into the top half of the West.

NOTHING TO SEE HERE

There is so much soccer on TV these days that you can afford to miss a few MLS tilts. Unless you're a die-hard supporter of one of the two squads, the first chapter in the 2017 Atlantic Cup derby is likely one of them.

When the New York Red Bulls invite D.C. United to Red Bull Arena, there tends to be fireworks and plenty of drama. Still, this fracas between the long-standing rivals seems to lack the same type of appeal because of where both currently stand in the Eastern Conference.

New York is in seventh place with a 2-3-1 mark, and that is only slightly better than D.C.’s 2-2-1 record. Both teams could use maximum points here, but this fixture figures to be more gritty than pretty.

If you are wondering what other game might be worth skipping, look no further than the Montreal Impact-Atlanta United meeting. The Impact has been one of the more underwhelming outfits thus far in 2017, and is likely to get steamrolled by a high-flying Atlanta side that just went toe-to-toe with Toronto. The expansion side is the clear favorite in this one.

Tim Howard had quite a rough week. Not only did the Colorado Rapids’ No. 1 suffer a lopsided defeat in Week 6 that challenged him mentally as much as it did physically, but he also lost his cool with fans and an opposing player.

First, it was Sporting KC fans. Then, it was Dom Dwyer.

UPDATE: As a result of these actions, and an incident in the tunnel after the game in which Howard reportedly grabbed a fan, the U.S. No. 1 keeper was suspended for three games.

Why Howard lashed out last week is unclear, but a possible reason is Colorado’s sputtering start to the season. It is not just the results that could be getting to Howard—his team is 1-2-1—but also the painful performances that are being put forth. The veteran is accustomed to competing at a high level, but Colorado is playing some of the worst soccer in the league right now. Winning regularly like the team did in 2016 can mask shortcomings, but losing only highlights them.

Nonetheless, Howard will attempt to put all that extracurricular stuff behind him while trying to get the Rapids back on track on Saturday against Rocky Mountain Cup rival Real Salt Lake. RSL just picked up an impressive win in its first match under new head coach Mike Petke, so confidence will be high as it takes a trip to Dick’s Sporting Goods Parks to take on Howard and offensively challenged Colorado.

How Howard responds will tell us a lot not only about the veteran goalkeeper, but also about the Rapids’ chances of getting back into the upper echelon of the Western Conference.