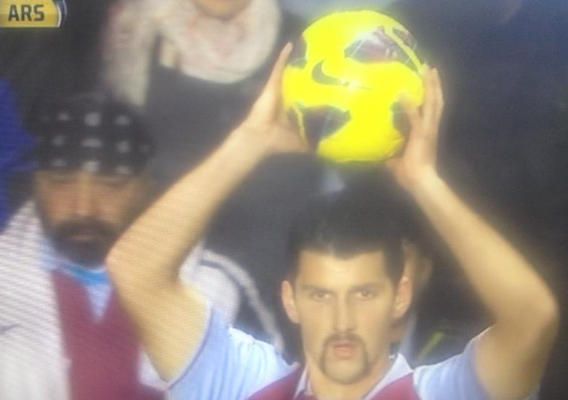 With December’s ASN 100 ranking set to debut on Saturday, Josh Deaver chronicles some of the key performances from the top players in the United States national team’s player pool.
BY Josh Deaver Posted
November 26, 2012
7:00 AM
Clint Dempsey—ASN rank #1
Following what has been a somewhat stuttering start to his Tottenham career, Clint Dempsey put in perhaps his best shift of the season Saturday in an impressive 3-1 victory against West Ham. Playing confidently in his reserved forward role, Dempsey registered an assist and helped in another goal as the Spurs picked up an important win after losing three straight league matches. Less than a minute after a ricocheting a shot off the crossbar, Dempsey deftly chipped the Hammers defense to a waiting Gareth Bale, who notched the game's deciding goal in the 58th minute. Fabian Johnson—ASN rank #6
The German-American defender continues to produce for Hoffenheim in what has been a breakthrough 2012 for both club and country. On Sunday, Johnson played 83 minutes and scored his third goal of the season in the club’s 2-1 loss to Beyer Leverkusen. Despite Johnson’s tally effort, the loss puts a struggling Hoffenheim side in the bottom three of the Bundesliga. Fellow American Danny Williams was an unused substitute in the match.
Terrence Boyd—ASN rank #16
Quickly becoming a staple in the ASN Monday recap, the Rapid Vienna striker scored for the second straight week, this time in midweek Europa league action against Mix Diskerud and Norwegian side Rosenborg. Boyd scored the second goal for Rapid, his 11th in all competitions, in what would ultimately be a 3-2 loss for the Austrian powerhouse. It’ s been a disappointing European campaign for Rapid, now the only team yet to register a point in the competition, but Boyd remains a bright spot as the squad makes a push to climb the Austrian Bundesliga table. Jose Torres—ASN rank #24
After nine years, Mexican side Pachuca has said “gracias, Gringo” to departing U.S midfielder Jose Francisco Torres. On Friday the 25-year old Texan completed a transfer which will see him with rival Tigres UANL when LigaMX play resumes in January. Joining the Pachuca youth team in 2003, Torres registered over 150 league appearances for the club. He also participated in multiple forays into the CONCACAF Champions League. A statement posted on the club's website read, “We thank ‘Gringo’ Torres for his professionalism, dedication and love of the shirt during his time at Pachuca, from playing in youth teams to his debut in the Apertura 2006 to consolidating himself in the first team.” Joe Corona (ASN rank #31) and Edgar Castillo (#37)
In front of a raucous home crowd at Estadio Caliente, on Sunday Tijuana advanced to the finals of the Liga XM playoffs with a 3-0 win in the second leg of their semifinal series with Club Leon. Only 18 months after entering the Mexican top flight, the unlikely Xolos fought back from a two-goal deficit in the first leg and will now face league leader Toluca for the 2012 Apertura title. Corona, the recently capped American midfielder, started and played 61 minutes, while defender Castillo played the full 90 minutes in the victory. Eric Lichaj—ASN rank #32
After being out of the Aston Villa lineup for two straight weeks, the Chicago-born defender was subbed on and played 36 minutes of a scoreless draw with Arsenal on Saturday. While it is noteworthy that Lichaj handled himself capably against the likes of Alex Oxlade-Chamberlin and Andrey Arshavin, the real story was his late contribution to Movember: he sported an impeccable handlebar moustache. American goalkeeper Brad Guzan started and played 90 minutes for the Villains.

Oguchi Onyewu—ASN rank #34
In midweek Champions League action, Onyewu started and played 90 minutes for La Liga side Malaga in a 2-2 draw with Zenit St. Petersburg. In only his second start this season, Onyewu put in a productive shift and showed that with the current defensive woes for the U.S. national team, Gooch should remain in the picture for the time being. In league action on Saturday, Onyewu was an unused substitute in a 4-0 win over Valencia. Juan Agudelo—ASN rank #47
After what was a successful week long training stint with Celtic FC, talk has now turned to the possibility that the Scottish giants may try to sign the 20-year old during the January transfer window. The Chivas USA forward has impressed Celtic boss Neil Lennon, who said, “He has looked very good, we have been very impressed with him.” Lennon added that further discussions with Agudelo’s representatives would be forthcoming. It’s not a done deal, however. Chivas communications manager Rodrigo Ochoa told MLSsoccer.com, “For us, the club, for the organization, Juan Agudelo is just keeping fit training with Celtic, and that’s it. There are no plans for the club to take any kind of transfer.” Zak Whitbread—ASN rank #67
Playing for Leicester City in the English Championship, Whitbread has now started six straight matches for the Foxes, currently sitting third in the league table and making a push for promotion. Although his injury-plagued history may temper the expectations of American supporters, his current form cannot be denied. If Jurgen Klinsmann is looking for capable centerbacks going into 2013, Whitbread may have emerged as a viable option. Joe Gyau—ASN rank #74
On Sunday the speedy winger received his first league start for 2Bundesliga side St Pauli and the team responded with a convincing 4-1 win over MSV Duisburg. Gyau was lively in the attack during his 64 minutes of action, and he nearly scored when his shot from distance was parried over the bar early in the second half. After several good performances, Gyau seems poised to break into the starting XI, something which would certainly improve his stock with the U.S. national team. Austin Berry—ASN rank #90
In a week that saw the Chicago Fire defender pick up MLS Rookie of the Year honors, it was also announced that the 22-year old would join Europa League champions Atletico Madrid for an offseason training stint through December 9th. Fire head coach Frank Klopas told the Chicago Tribune, "Austin has had a very productive first season and this trip allows him to continue to train and develop as we build toward the 2013 season." QUICK NOTES
With Michael Parkhurst’s (#13) Danish contract expiring in January, Klinsmann is keen on helping the defender find a larger club in the January transfer window. Tim Ream (#40) started again for Bolton Wanderers in the English Championship this week—as a defensive midfielder rather than central defender—in Saturday’s 1-1 draw with Brighton & Hove Albion. Ream spoke to the Bolton News about the match. Amobi Okugo (#91) and Michael Farfan (#98) will join German side SC Freiburg for an offseason training stint. Josh Deaver is a former academic turned soccer obsessive. Follow him @USFootballGuy for daily updates.