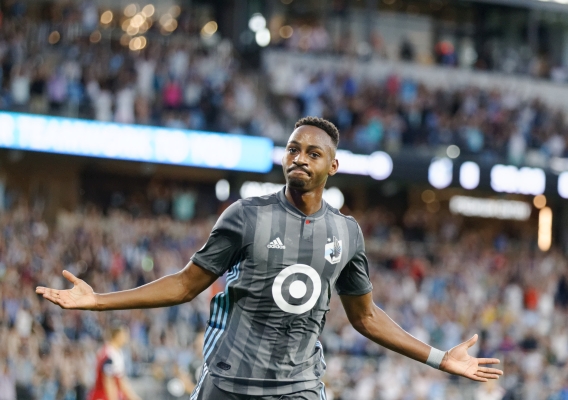 As is a tradition, ASN's weekend preview is here. Among the 10 best games to watch are some intriguing Decision Day contests as well as big games for some of the top young American players in Europe. Meanwhile in Argentina, two Americans could face off against each other for the first time in that league's history.
BY Brian Sciaretta Posted
October 04, 2019
6:00 AM
THE WEEKEND ahead will be a fun one with Decision Day in MLS as well as a few big games abroad. It is also the last slate of games before the international window opens so some players will be looking to carry momentum from these games into representing the United States.

Sure, the abroad contingent has lost a little bit of its luster due to Christian Pulisic and Tyler Boyd only seeing infrequent minutes and Sergino Dest uncommitted to the United States at the moment. There are also key injuries to players like Tyler Adams, John Brooks, and Tim Weah. But the recent strong performances of Zack Steffen, Weston McKennie, Josh Sargent, and Duane Holmes continue to provide meaningful and intriguing performances.

On the domestic front, Decision Day will determine the final standings and playoff positions of the 2019 MLS season. In the Eastern Conference, the seven playoff teams are already settled but the positions of the team are still to be determined. The Red Bulls, DC United, and Toronto are all still trying to fight for the final spot for homefield in the first round of the playoffs.

In the Western Conference, things are far more chaotic. Los Angeles FC is the best team but the remaining positions are all unsettled. In addition to the positions that allow for hosting first round games, there is a battle just to make the postseason. San Jose, Portland, FC Dallas, and even Colorado FC are all in the mix for the final two playoff positions.

With all that said, here are the 10 best games to watch this weekend from an American perspective.


Josh Sargent should be heading into the international window loaded with confidence. The U.S. national team striker is coming off two straight starts for Werder Bremen and last weekend was one of his best performances. While he did not score, Sargent was effective in a 2-2 away draw against Borussia Dortmund and notched an assist.

On Sunday, Werder will be taking on another team that is in midtable in Eintracht Frankfurt. Former U.S. national team right back Timothy Chandler still sees occasional minutes for Eintracht.

But for Sargent, this is important for his U.S. national team prospects because the team needs more firepower at the forward positions. That starts with Sargent playing well heading into camp.

This magnitude of this game depends on how you look at it. The winner will advance to the playoffs and the loser will probably miss out. But both teams have squandered so many chances down the stretch that its easy to understand fans thinking neither team deserves to go to the post season.

Portland has the edge in this one as it is playing at home and has a veteran core that has played in do-or-die games. The core is essentially the same as the one which advanced to MLS Cup last year. Designated player Brian Fernandez was red hot when he joined midseason but has gone cold. That gap has been made up by U.S. U-23 forward Jeremy Ebobisse.

But Portland recently came off a 10 game homestand where it won four games but just two of its final eight of the homestand. That allowed other teams to catch up to its lack of progress.

San Jose, meanwhile, was once cruising towards the postseason but that is now in doubt after the club has lost five games in a row. This week, head coach Matias Almeyda has been linked to taking the Monterrey job and that has only served as an unneeded distraction.

San Jose has two U.S. internationals in Nick Lima and Jackson Yueill, but both could be coming into camp slumping if the Quakes are eliminated on Sunday.


Schalke is one of the hottest teams in the Bundesliga after having won four in a row. Last weekend was one of the team’s best results in over a year when it downed then league leading RB Leipzig by a 3-1 score away from home. Weston McKennie went the distance and was helpful on both sides of the ball in the upset.

Awaiting them will be a winnable game against 17th place Koln at home. Schalke is one of five teams in the Bundesliga at 13 points. That is one point behind Bayern Munich. So a win against Koln could see Schalke either secure its grip on second place or perhaps move into the lead if other results break its way.


This game should be the pick of the litter to watch on Decision Day. Yes, both teams have already qualified for the post season but this game’s winner will secure second place in the Western Conference. While unlikely, the loser might not even host a first-round playoff game.

Both teams have generally played well in the second half of the season and if LAFC fail to advance to MLS Cup, it is easy to see the West’s representative come from these two. This game should have plenty of offense in Seattle and it is likely to be wide open – especially with Nicolas Lodeiro back for Seattle.

For American fans, Seattle has two internationals in Jordan Morris and Cristian Roldan. Meanwhile, Minnesota United has the U.S. U-23 duo of Mason Toye and Hassani Dotson. Toye has cooled off in recent weeks and will look to get going heading into the playoffs. Meanwhile Dotson, a midfielder who also plays fullback, is in line for the rookie of the year.

Of course, Seattle will be looking to welcoming back club legend Ozzie Alonso.


Zack Steffen has been great since joining Fortuna this year. The number one U.S. national team goalkeeper is in a solid spot at the club level and Fortuna will surely want to extend his loan from Manchester City. Also, Alfredo Morales has done well but has been injured recently. The U.S. national team central midfielder might return for this game, which should be a boost to its chances.

Fortuna Dusseldorf is a team that could find itself in a relegation battle, if it is not careful. Players like Steffen and Morales could very well be the difference in its survival. Even playing away, Hertha is a winnable game for Fortuna and three points could go a long way towards keeping its Bundesliga status.


FC Dallas controls its own destiny on Decision Day, despite poor form down the stretch. It is going to be a big test for head coach Luchi Gonzalez to find a system that works. U.S. international Paxton Pomykal has been dealing with hamstring issues and isn’t 100%. Brandon Servania is still in concussion protocol.

That being said, this is a game that Dallas should win. It will be playing at home against a Sporting Kansas City team that has long since been eliminated from the postseason. It is also dealing with injuries and suspensions.

A win would put Dallas into the playoffs but that is easier said than done. The club hasn’t won in four games.


Atlanta United is looking to secure second place in the Eastern Conference with a win over New England. But the team will still be without Josef Martinez, one of the most effective forwards in league history. But adjusting to life without Martinez has not been easy and Atlanta has been mediocre the past two games (loss to New York City and a draw against Montreal).

Can Atlanta being to show progress without Martinez?

Meanwhile, New England clinched a playoff berth last weekend with a stunning 2-0 upset win over New York City FC. It once seemed like a foregone conclusion that the team would not make the playoffs but the Revs have rallied under Bruce Arena and have three draws and a win in their last four. A win in Atlanta, however, would certainly raise alarm bells among any potential playoff opponent because it would give the club its second straight statement win.


Duane Holmes was one of the most surprising omissions for the upcoming U.S. national team roster. Holmes was slated to be on the Gold Cup team this summer but had to withdraw and wasn’t able to return to the first team until late August. But lately, Holmes has returned to the club’s first team in fine form.

The Georgia-born Holmes is certainly not out of the U.S. national team picture and continued strong performances will only force his way back onto the team. Especially as Derby is recovering from an unfortunate incident where several of its key players were injured and/or arrested for a drunk driving incident. Holmes is being asked to step up, and he is.

Having American players involved in the Argentine Primera is rare. But on Saturday, two Americans could face off against each other for the first time in Argentina’s top flight when Matko Miljevic and Argentinos Juniors host Joel Sonora and Arsenal Sarandi. Both players are play making midfielders

Joel Sonora has scored three goals for Arsenal de Sarandi but is coming off the bench recently. The 2015 U.S. U-20 World Cup midfielder is hoping his performances with Arsenal earn him a spot on the U.S. national team.


For the first time ever, two U.S.-born players could face each other in an Argentine 1st div match when Joel Sonora's Arsenal play Matko Miljevic's Argentinos Jrs on Saturday.... Sonora: "Matko would fit really well into Tab's team." https://t.co/dnEAlptkmH

For Matko Miljevic, he played for the U.S. U-16 team three years ago but that remains his only U.S. call-up to date. U.S. U-20 head coach Tab Ramos attempted to call him up last month but his release was denied by Argentinos Juniors. Ramos, however, has said he wants to get Miljevic into his team’s next camp. Miljevic has made three appearances for Argentinos and has scored once.


Chatted earlier this week with Argentinos Juniors MF and #USMNT eligible Matko Miljevic. Says he enjoyed speaking with U.S. U-20 coach Tab Ramos and hopes to have a chance to play for the U.S. soon: https://t.co/wbidShQOoY

But lost in the mix of having two Americans in this game is that this game is actually big. Through eight rounds of the Primera, Arsenal is in fourth place and Argentinos is in fifth.

After being soundly relegated out of the Premier League last season, Fulham is a team that is capable of making a quick return. Most of that effort is going to come down to the team’s defense – which is lead by Tim Ream. The St. Louis was named Fulham’s player of the season in 2017/18 when it won promotion and Ream is off to another strong start.

Through 10 games, Fulham sit in fourth place but is only two points off of first. But it has the best goal differential in the league (+10) after only having only conceded eight goals.

Ream’s career in the Championship has been outstanding. He’s been named his club’s player of the season three times at this level, which is very rare for an American player.