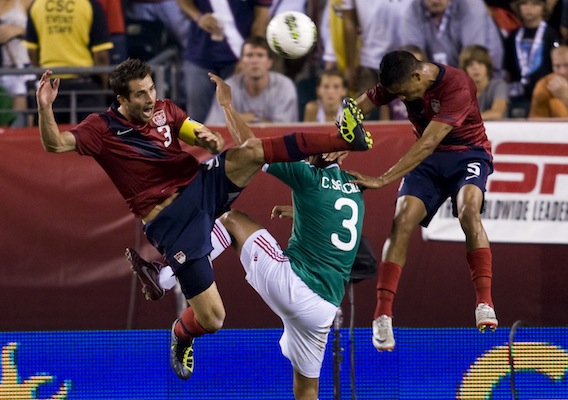 De-Fense!: It's All About Those Free Kick Situations

ASN's defensive specialist examines the United States backline before the vital World Cup qualification games and talks to Alexi Lalas about what the American team needs to do better.
BY Andrew Lewellen Posted
October 09, 2012
11:00 AM

The benefit of writing about the defenders who Jurgen Klinsmann named to the USMNT’s 24-man roster for its last two CONCACAF semifinal round qualifiers is that it means avoiding all the hubbub surrounding the coach's more controversial roster choices. There are no surprises in the backliners, with the only changes coming in reserve players: Michael Orozco Fiscal and Jonathan Spector are out; Edgar Castillo is in. Other than that, everything is the same. All six players who started the two qualifiers against Jamaica are on the roster. The back line that preserved a shutout against Jamaica on 9/11—Steve Cherundolo, Geoff Cameron, Carlos Bocanegra, and Fabian Johnson—is present, as are Clarence Goodson and Michael Parkhurst, who played in the 2-1 defeat in Kingston.

And that consistency is a good sign. It shows that though Klinsmann may not have yet settled on a final back four, he has a stable pool of players from which to choose. The top four defenders in the lineup have all been performing consistently for both club and country. Cherundolo, Cameron, and Fabian Johnson are regular starters in their club sides: Hannover 96, Stoke City, and Hoffenheim, respectively. And with those clubs they face, week-in and week-out, some of the world’s top competition. Last weekend, Cherundolo went the full 90 in Hannover’s tie with defending Bundesliga Champions Borussia Dortmund. Cameron played the full match against Liverpool, a game in which his defensive responsibilities included marking Luis Saurez. Johnson has been blazing up and down the left flank for Hoffenheim and has two goals on the young season. Bocanegra didn’t earn his first start for Racing Santander until late September, but his consistent performance for the national team makes him a sure starter in North Sound on Friday and Kansas City next week.

You could argue for a few additions to the roster. Many people are still waiting to see when the L.A. Galaxy’s Omar Gonzalez, the 2011 MLS Defender of the Year, gets another shot with the team. But must-win World Cup Qualifiers are not the place where you take risks in the back. It’s one thing to dump a forward who’s on fire for his club (Jozy Altidore) and call in an unproven international who has scored goals in MLS (Alan Gordon). It’s a whole different scenario to see if a player with one cap (Gonzalez) can handle the international game.

One of the big questions for the defense is the offensive contribution it will need to make. I spoke with Alexi Lalas about the role he sees the back four playing for the team. “This defense…has been asked to at times provide the attack, especially from the outside backs,” he says. “So much so that that’s where the wing play comes from and where the attacks come from.”

The U.S. has no lack of strong, defensive central midfielders: Michael Bradley can play box-to-box, and then some. Danny Williams excelled in the 9/11 match against Jamaica. Kyle Beckerman and Maurice Edu are always additional options in the middle of the park. But there is little depth at wide midfield. Other than Graham Zusi and Brek Shea—both of whom are still unproven players at the international level—no American has been a consistent offensive threat on the flank. It’s possible that Klinsmann asks Williams to play as a holding midfielder in front of Cameron and Bocanegra, and gives Johnson and Cherundolo license to fly on the flanks. That could leave the U.S. exposed at the back, but it might provide an exciting opportunity to see how well the centerbacks can shut down the opposing forwards.

The primary area of concern for the defense is set pieces. In the team’s last three World Cup qualification games, it's given up three goals—all of them off set pieces. This demonstrates a lack of clear leadership at crucial moments. Those errors, says Lalas, “come from a mentality that I believe starts from the back. That comes from a leadership [issue].”

Games are often won and lost in those crucial moments. Jamaica beat the U.S. in Kingston on two set pieces, and the United States’ victory over Jamaica in Columbus came off a Herculez Gomez free kick—which Jamaica goalkeeper, Dwayne Miller, misplayed. The biggest challenge for the U.S. defense in these final two semifinal qualifiers may not be how well they support the attack or mark opposing forwards during the run of play but whether they can stay composed in the hectic moments before set pieces. If the defense can remain organized and focused at those times, the United States’ chances of moving onto the Hexagonal look very good.