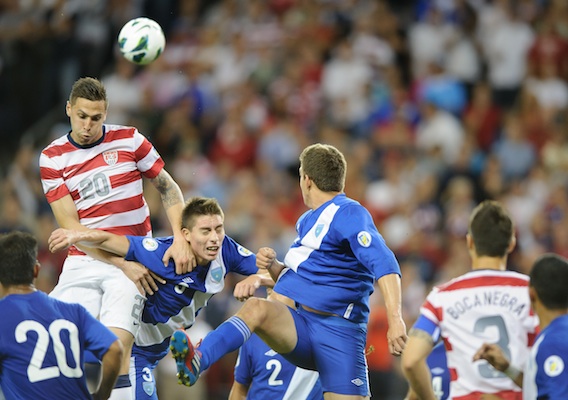 The United States back four did not have its best match on Tuesday night, letting Carlos Ruiz in alone and making other errors. Andrew Lewellen wonders if there's a solution.
BY Andrew Lewellen Posted
October 17, 2012
11:01 AM

When Carlos Bocanegra scored in the 10th minute of the United States’ 3-1 victory over Guatemala on Tuesday, he became the highest-scoring American defender with 14 goals.

But he earned that achievement after he, along with Geoff Cameron, committed the night’s worst gaffe by either team: letting the 33-year-old Carlos Ruiz, Guatemala’s only dangerous player, get free and run onto a long ball. Bocanegra gave chase, but as Ruiz sprinted onto the ball near the edge of the penalty area, the defender slowed down—did he think Tim Howard was coming out? Was he giving up? Only Bocanegra knows.

What the rest of us know is this: Howard balked, Ruiz controlled the ball, and while Bocanegra jogged behind him, the forward dribbled around the netminder and gave Guatemala a surprising 1-0 lead.

Behind the goal, the Guatemalan fans erupted. The American defense bickered; there was yelling, pointing, hand clapping.

It was the second defensive lapse in as many games. On Friday, the U.S. gave up a goal when a series of miscues—including Cameron misplaying Peter Beyers and Clarence Goodson slipping—led to Antigua & Barbuda’s tying goal.

The elements that led to the Chapines goal were not surprising for the defense. “They like to put the ball up in the air with Ruiz running onto it,” Geoff Cameron said the day before the World Cup qualifier.

It was a dumb mistake that could have hurt the U.S.: “We didn’t need to take that first goal. That wasn’t necessary… We actually trained that yesterday specifically, and then still it happened” Jurgen Klinsmann said after the match.

Fortunately for Bocanegra, five minutes after his error he made up for it at the other end of the field. And then the American attack stepped up. But while the offense began to find its form—with Michael Bradley controlling the ball, Eddie Johnson finding a confident and positive attacking attitude, and Clint Dempsey tallying two goals—Cameron and Bocanegra struggled to mark Carlos Ruiz and his strike partner, Carlos Figueroa.

Ultimately, it was Danny Williams, looking confident and comfortable in his role as a defensive central midfielder, who helped solidify the backline. Klinsmann noted as much after the game, saying “Danny [helped build] that triangle that we needed in order to deal with Carlos Ruiz.”

Overall though, the defense was the weakest part of the performance. Michael Parkhurst looked uncomfortable at left back; he didn’t want the ball at his feet, and he didn’t seem hungry to get into good defensive positions. His size also made him a liability in the air. Steve Cherundolo had a few positive contributions; his wonderful ball to Eddie Johnson down the flank and around a Guatemalan defender led to the second goal. But he was beaten in the air a few times as well. He often stood wide demanding the ball but didn’t get it, limiting his opportunities to affect the match as he had against Jamaica in Columbus.

In the post-game press conference, Jurgen Klinsmann spoke about the need in 2013 to bring in fresh blood and give them a chance while also winning World Cup Qualifiers.

“We have to take care of qualifying …at the same time we want to see also new players coming and making a stamp,” he said.

That's not an easy task. Klinsmann understands that the challenge of CONCACAF qualifying is looking forward and preparing for the future while remaining appropriately focused on the present.

Klinsmann made controversial decisions during the last two matches of the semifinal round, but they all related to offensive players: leaving out Jozy Altidore and Chris Wondolowski while calling up Eddie Johnson and Alan Gordon. In the end, those choices proved to be good ones. Johnson scored his two goals on Friday, and he put an emphatic offensive stamp on the match against Guatemala. For his part, Gordon came into the Antigua & Barbuda game and made a contribution: he assisted on the game-winning goal, playing Johnson a perfectly placed and paced one-time pass that the Seattle Sounders forward headed into the goal.

Looking ahead to the Hexagonal, expect Klinsmann to make key roster decisions that will change the complexion of the defense. We’ll likely see Omar Gonzalez get another shot at the national team during January’s camp. And he deserves it. He deserves to be tested, to show what he can or can’t do at the international level. Lurking on the outside is also Tim Ream, who struggled in his last appearances with the national team during the 2011 Gold Cup. But that was a year and a half ago. Further down the list is George John of FC Dallas. Another option, a guy not even in the ASN 100, is Ike Opara, a starting center back for the MLS-leading San Jose Earthquakes, as well as for the U-23 national team.

The U.S. has choices, many of them young players. Klinsmann took some risks by bringing in new offensive players over these last four matches. Now we’ll see if he’ll do the same in order to find a defense that can carry this team into the World Cup and beyond.