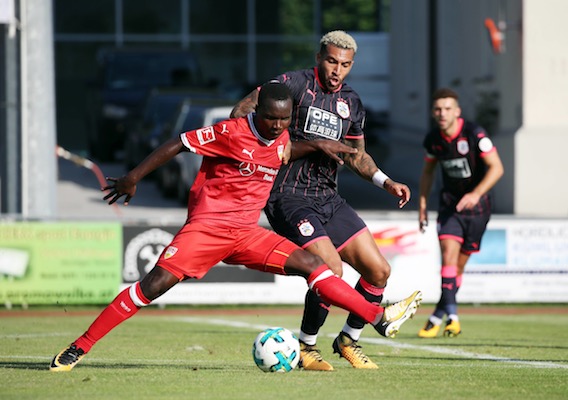 The Huddersfield Town midfielder received his first Permier League start and put on an impressive display but Johnson, one of the most talented athletes in the U.S. player pool, continues to slide.
BY Brian Sciaretta Posted
September 19, 2017
8:00 AM

IT WAS AN UNEVENTFUL weekend for Americans Abroad that featured few standout performances or impressive wins. To get to the top stories, you have to dig beneath the statistics.

On top of that, regulars Bobby Wood and Geoff Cameron did not play due to injuries, joining John Brooks and Kenny Saief who are both out with long-term injuries. Timothy Chandler and Omar Gonzalez both participated in lackluster losses. Here's the latest.

Danny Williams, 28, has been coming off the bench so far for newly promoted Huddersfield Town. But on Saturday he made his first Premier League start against Leicester and he went the distance in a 1-1 draw.

Williams played in a defensive midfield role and gave a very good performance. It was the type of showing he needed to have for both club and country. Williams proved to manager and fellow German-American David Wagner that he was ready to contribute at this level and he needed to make a point to Bruce Arena that he should be in the mix should the Yanks get to the World Cup.

Arena said earlier this month that Williams is a player he would like to call-up to evaluate but he did not say when this would happen.

Williams is a very talented player but has shifted positions many times throughout his career. That is a positive in that it shows his versatility but it is also a negative because he has never been able to settle into a specific role. Last season with Reading, for example, he played one of the attacking midfield roles in a 4-3-3. Sometimes he even played as an outside midfielder or as a box-to-box No. 8.

Now at Huddersfield he is settling into a No. 6 which is a bit different for him but one that could serve the U.S. and Huddersfield well. For the national team, central midfield alongside Michael Bradley has been unsettled as Jermaine Jones has aged, Dax McCarty has been an unused sub, and Kellyn Acosta is still breaking into the team.

Bobby Wood, 24, was out of action for Hamburg on Friday as it lost 2-0 to Hannover. Afterward, it was revealed that the U.S. national team forward missed the game due to ongoing knee issues.

The good news is that Wood could be back this Wednesday according to a report from Kicker.

The bad news, according to that same report, is that Wood continues to have knee problems and that Hamburg has to regularly evaluate Wood and determine if he is at a point where he risks an injury that could keep him out for a long period of time.

Wood has had knee problems dating back to a 2011 meniscus injury he suffered while with the U.S. U-20 team. The Hawaii native suffered many complications coming back from that injury which nearly derailed his career and it took him nearly two years to return to the field on a consistent basis.

Wood is a high-risk/high-reward player. There is always the chance he is going to either miss games due to injuries or be forced into a limited role. It is hard to depend on him. But the reward is huge when he is able to play at 100%. At that point he can be an outstanding forward at the highest levels.

With Erik Palmer-Brown already singing a pre-contract with Manchester City, there are several possibilities as to who could be next.

One player to keep an eye on is North Carolina State freshman attacker Manny Perez who is one of the top college players in the country. Last week he was named the NCAA Player of the Week.

A member of U.S. youth national teams, Perez could be a one and done with NC State. A source familiar with Perez’s situation told ASN that he has interest from both MLS and Europe. Perez will likely be a part of the upcoming U-20 national team for the 2019 cycle.

Perez is a native of North Carolina and has played mostly in attacking positions to take advantage of his one-on-one play but he can also play right back.

Last week Mexican paper The Record, indicated that the Mexican national team might make a play for U.S. U-20 midfielder Jonathan Gonzalez who is in the midst of a breakout season for Liga MX leaders Monterrey.

The report itself is very vague and it offers no direct quotes. It only says that Monterrey head coach Antonio Mohammed spoke to Mexico head coach Juan Carlos Osorio and recommended Gonzalez. It also noted that Gonzalez has been a consistent player for U.S. youth national teams.

The chances of Gonzalez, 18, switching to Mexico right now are low. Gonzalez has told U.S. youth coaches that his priority is the United States. He told ASN this summer that he wants to continue to play for the United States. At the start of his career, he turned down an offer from Chivas because that club’s policy would prevent him from playing for the United States. Gonzalez has been a consistent and strong presence on U.S. youth teams dating back to the U-14 level and has always been highly rated by U.S. Soccer coaches. Gonzalez also played for the U.S. U-20 team in World Cup qualifying in February. That means to switch to Mexico, he would need to file a one-time permanent switch.

Gonzalez has become a key part of Monterrey’s midfield and that club is romping through Liga MX where it is yet to lose through nine games. On Saturday, Gonzalez was in fine form again, going 90 minutes in a 2-1 win over Atlas and completing 43 of his 50 passes as he patrolled the middle of the field.

What's Up With Fabian Johnson?

There's no two ways about it: Fabian Johnson is not playing for Borussia Monchengladbach. Last month his time was limited as he was working through an injury. But that is no longer the problem. In preseason he was mostly coming off the bench for coachDieter Hecking. Now he’s rarely seeing the field.

Johnson, 29, went as an unused substitute on Saturday for Monchengladbach in a 2-2 draw with RB Leipzig despite the fact Hecking only made one sub the entire game. Johnson has appeared in just one of Monchengladbach’s four Bundesliga games so far this season for a total of 10 minutes. In a German Cup match, Johnson appeared briefly in second-half stoppage time.

In 2017, Johnson was expected to be one of the top American players for Bruce Arena. But Johnson isn’t playing for Monchengladbach and has looked lackluster the last few times for the national team. He is still a highly talented athlete and has had great games the past few years for both club and country. But with must-win games ahead, his rough patch couldn’t have come at a worse time.