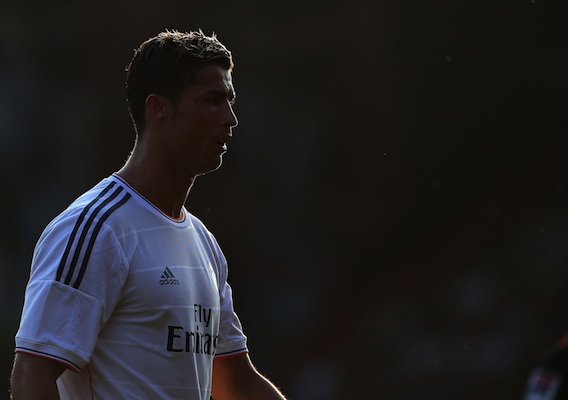 We've said it before, and it bears repeating: Keep your friends close, and your enemies Klose. Each week Blake Thomsen's Group G Watch will help you keep tabs on the U.S.'s World Cup foes.
BY Blake Thomsen Posted
January 23, 2014
12:30 PM
WITH THE GERMAN LEAGUE still on winter break, it was always going to be up to Portugal and Ghana’s players to step up for this week's Group G Watch. They obliged. Cristiano Ronaldo stole the show, but his blinder wasn’t the only excellent goal on display in an impressive weekend from the U.S.’s Group G foes.

Germany’s Arsenal trio all featured in the Gunners’ 2-0 weekend win over Fulham. Per Mertesacker led Arsenal to a league-leading 10th clean sheet, while Lukas Podolski came off the bench to launch a stunning effort off the post. Mesut Ozil continued his run of poor form with a lackluster effort—he’s now gone four straight games without a goal or assist.

So Real Madrid had a game against Real Betis this weekend and Cristiano Ronaldo did this:
Cristiano Ronaldo Wonder Goal vs Betis 2014 by f100001307743477 Words aren’t really helpful when attempting to describe the utter Ronaldo-ness of the goal, so we’re just going to move on without comment. Ronaldo’s club and international teammate Fabio Coentrao responded to a rare start by getting sent off in Madrid’s 2-0 Copa del Rey win at Osasuna. Coentrao has been marginalized under new Madrid manager Carlo Ancelotti, and picking up needless red cards will not help his cause. He’s still the automatic starter at left back for Portugal—and that probably won’t change before Brazil—but sitting on the Real bench for the next four months isn’t going to do him or Portugal any good. With that in mind, don’t be surprised if Coentrao leaves Madrid in the last few days of the transfer window.

Ghana’s Emmanuel Agyemang-Badu got his first start for Udinese in a while and made the most of his chance. Video of his fantastic volley has mysteriously disappeared from the Internet, but rest assured it was beautifully taken, and slightly reminiscent of Asamoah Gyan’s winner against the U.S. in 2010. Click the video below to hear an (Italian?) radio call of the goal. Bonus points for anyone who can translate it. And leave your translation in the comments section, please. Agyemang-Badu generally comes off the bench for Ghana, but he’ll strengthen his case for a starting spot by getting more playing time and scoring more spectacular goals for Udinese.

FC Porto’s Varela (Portugal) is having a bit of a down year, but you wouldn’t know it after seeing the goal he scored this weekend in a 3-0 win over Setubal Vitoria. Varela’s mazy run and slammed finish serve as a reminder of the quality that Portugal has, even from its reserves.
FC Porto vs Setúbal: golo Varela by drogo1893

Ghana’s Christian Atsu, on loan from parent club Chelsea, scored an excellent goal for Vitesse Arnhem in this weekend’s 2-1 win over PEC Zwolle. Atsu’s weaving run is aided by some customarily lax Eredivisie defending, but the finish is pure class. For those keeping score at home, Atsu is still 10 league goals behind Aron Johannsson.

The Asamoah Gyan train is slipping off the tracks a bit, as the Ghana captain failed to score for the second week running. Despite his lack of goal-scoring exploits in recent weeks, the rumors are heating up that Gyan may be on the move to the Premier League over the next few days. Stoke City and West Ham—both in need of strikers—are the rumored destinations. Which goal from a Group G player impressed you the most this week? Can you speak Italian? Leave a comment below! Blake Thomsen is a frequent ASN contributor. Follow him on Twitter.