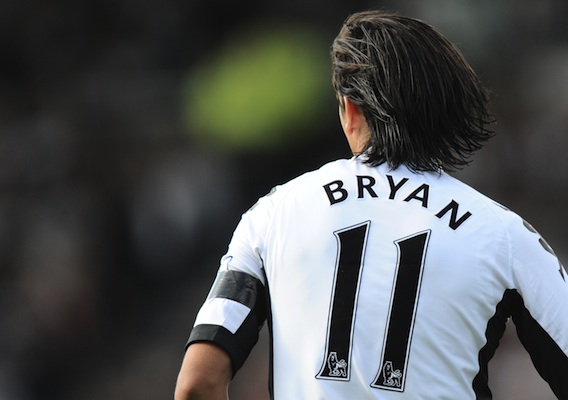 Could Bryan Ruiz Be the Key for Costa Rica?

The Fulham attacker continues to play well for his club in England and will be a handful for the United States backline. Jon Arnold takes a look at that story and more in his trip around the region.
BY Jon Arnold Posted
March 19, 2013
11:57 AM
The five national teams the U.S. faces during the Hexagonal round of World Cup qualifying include players who play outside CONCACAF. You know how the Americans fared abroad each week, but what about the players they’ll be facing? We’ll keep you updated on their progress each week. Also, don’t forget to check out our section dedicated to all things Hex.

Real Betis had a mess of a match with a center back conceding a penalty and getting sent off in the 15th minute. Joel Campbell was replaced soon after with a reserve center back coming on in his place. That guy later scored an own goal and Betis ended up losing 3-0 to Valencia. Bryan Ruiz played a key part for Fulham before leaving its 1-0 triumph over Spurs in stoppage time. The attacking midfielder, who emphasized the total team effort after the match, paired well with Dimitar Berbatov but didn’t have a shot attempt. Bryan Oviedo was an unused substitute as Everton beat Manchester City, 2-0. Midfielder Christian Bolaños helped Copenhagen to a 2-1 victory against Horsens. He played all 90 minutes Friday. Goalkeeper Keylor Navas started for Levante in its Europa League match Thursday in Moscow. The keeper kept Rubin Kazan off the board until extra time when the Russians scored in the 100th and 112th minute to advance. He didn’t play in a weekend draw with Granada. With the Tippeligaen opening we add Giancarlo Gonzalez and Michael Barrantes to the list. Gonzalez went the full 90 in Valerenga’s defeat to Brann. Barrantes had a brace for Aalesund in a win vs. Haugesund.

Chicharito will be well rested for tilts against Honduras and the U.S. He was an unused substitute for Manchester United in its victory against Reading. Carlos Vela’s Real Sociedad knocked off Real Valladolid, 4-1. Vela didn’t score for a change but had two assists. He also set up a few other chances, including a nice back heel, but they didn’t lead to anything.
REAL SOCIEDAD 4 VALLADOLID 1 by acosart With Oribe Peralta out injured, fans would love to see the in-form striker reconcile and return to El Tri, but it’s not happening and Chepo is tired of the whole thing. Real Madrid thrashed Mallorca, 5-2, which isn’t a huge surprise, but it was unusual to see Mallorca lead not once but twice before they were put away in the second half. Gio dos Santos assisted one of the goals. His coach, Gregorio Manzano, talked earlier this week about dos Santos’ importance to his side, calling him the club’s Ronaldo. Center back Hector Moreno had two tackles in Espanyol’s road win over Malaga. Andres Guardado started and went 85 minutes in Valencia’s 3-0 win against Real Betis. Guillermo Ochoa is back with the national team and continues making a compelling case to be El Tri’s netminder numero uno. He had three saves, keeping Marseille off the board in a 0-0 draw. A quick aside: if every league did these short recaps telling the story of each game each week in English, soccer fans would be that much happier. Another full 90 for Javier Aquino with Villarreal, which was able to overcome a sending off to beat Huesca in the Seugnda Division. The Yellow Submarine sits in the playoff positions but is only four points out of automatic promotion.

The woes continue for Reading trio Adrian Mariappa, Jobi McAnuff, and Garath McCleary. The team lost to Manchester United, 1-0, and seems doomed to relegation. Mariappa was probably the best Royal in defeat. McAnuff and McCleary worked together in the midfield, going the full 90, but couldn’t break down the Premier League leaders. Nyron Nosworthy played center back for all of Watford’s 3-0 win against Nottingham Forest. Omar Daley was on the bench for Motherwell, which rolled to a 4-1 win against Hibernian on Friday. Jermaine Johnson came on in the 68th minute for Sheffield Wednesday and was booked in the final minute of a 2-0 loss to Cardiff. Tremaine Stewart and Demar Phillips both started in Aalesund’s first Tippeligaen of the year match, and while Stewart scored the first goal in a 3-0 win, both were subbed out. Phillips made way for yet another Jamaican. Rodolph Austin went 90 minutes for Leeds United and got a yellow card in a 2-1 loss to Huddersfield. Jermaine Beckford came on late for Huddersfield with the scoreline knotted at 1, and his team was able to get the victory. His teammate Theo Robinson didn’t get off the bench. Forward Ricardo Fuller came on in the 67th minute, but Charlton Athletic lost 2-0 to Millwall. Always-steady Marvin Elliott played all of Bristol City’s 2-1 loss at the hands of Wolves. Dane Richards doesn’t play for Burnley but still got called in to the national team.

After playing all of Millonarios midweek Copa Libertadores victory over San Jose, Román Torres sat out of his team’s league win. Gabriel Gomez went the full 90, but Junior continued its poor run of form, losing to Santa Fe 3-2. Staying in Colombia, Nelson Barahona came on for Itagui for 20 minutes. The match, against Patriotas Boyaca, ended scoreless. Godoy Cruz lost to Lanús on Sunday, but don’t blame Panamanian Armando Cooper. He wasn’t in the 18. Luis Henríquez got back in the Lech Poznan team, playing all of a scoreless draw against GKS Belchatow. Yairo Yau was dropped from the Panama team this time around and hasn’t played since the last qualifier, so we’re dropping him from this feature. Maybe he’ll be back next matchday.

Fortune finally smiled on Wigan, who beat Newcastle on a last-minute winner. Maynor Figueroa went the whole match at left back. Roger Espinoza didn’t make the team. Celtic came back from 3-1 down with a half-hour left to beat Aberdeen, 4-3. Emillio Izaguirre went the full 90 at left back. Celtic is now 15 points clear. Carlo Costly and Veria lost 2-1 to AEK Athens in a match that made more news because of a gesture off the pitch than anything on. Costly went the full 90 but didn’t score. Defender Osmán Chavez hasn’t been seeing time for Wisla Krakow but still got the call from Luis Fernando Suarez. Same situation for defensive midfielder Luis Garrido, who has missed Red Star Belgrade’s two most recent matches. Jorge Claros, a defensive midfielder, played all of Hibernian’s 4-1 loss to Motherwell on Friday in Scottish Premier League action. Whose performance strikes the most fear in your heart? Have we missed any players who you think should be in the U.S.’ game tape rotation? Any information you’d like to see in future editions? Let us know in the comments section. Jon Arnold (@ArnoldcommaJon) is a writer based in Arizona and is ASN's CONCACAF correspondent.