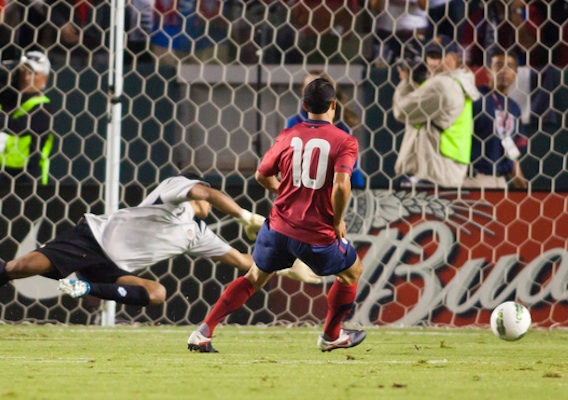 Hex Foes Abroad is back. You know how Americans players fared outside of CONCACAF each week, so ASN updates you on the progress of the players they'll be facing in World Cup Qualifying.
BY Jon Arnold Posted
August 27, 2013
10:55 AM
Editor's Note: Don’t forget to check out our section dedicated to all things Hex.

Bryan Ruiz is yet to get off the blocks with Macedonian Pajtim Kasami filling the spot behind the forward that had been Ruiz's last season at Fulham. Things aren't going any better for the Premier League's other Costa Rican Bryan. 23-year-old Bryan Oviedo hasn't made Everton's team either week. Keylor Navas had a rough start to the season, watching Barcelona put seven goals into his net. The Levante keeper will be much happier with the scoreless draw this weekend against Sevilla. Joel Campbell is now with Olympiakos and played the full 90 in the Greek club's 2-1 win against Atromitos. Michael Barrantes finished off some lovely work from Abderrazak Hamdallah to score in Aalesund's 1-1 draw with IK Start. Giancarlo Gonzalez came onto replace countryman Diego Calvo in the 76th minute of Valerenga's 1-1 draw against Lillestrom. Promising center back Oscar Duarte logged the full 90 with Club Brugge in a 1-1 draw against Gent. Junior Diaz hasn't started for Mainz in the Bundesliga yet this season. Cristian Gamboa and Rosenborg went on the road to beat Sandnes Ulf 3-2. Gamboa went the distance. Title-contenders AIK dropped points to relegation-candidates Halmstad in Sweden this weekend. Celso Borges went the full 90 in the defeat. Cristian Bolaños started and played 73 minutes in Copenhagen's 1-1 draw with Vestsjaelland. Kenny Cunningham made a move to Wellington Phoenix after a successful Gold Cup and awaits the start of the A-League season.

Gio dos Santos converted a penalty for Villarreal's first goal and was substituted at the half because of an apparent injury. The good news for El Tri fans worried about their wingers is Javier Aquino impressed on the right side and played the full 90 minutes. Center back Hector Moreno was linked with several teams during the offseason but so far continues on with Espanyol. He went the full 90 and got the better of Andres Guardado's Valencia in a 3-1 win. Guardado came on as a late sub. Chicharito didn't make David Moyes' Manchester United team for its scoreless draw against Chelsea, meaning he probably enjoyed watching it just as much as the rest of us did. Guillermo Ochoa continues to impress for Ajaccio, keeping a clean sheet against Nice this weekend, but won't be appearing between the sticks in Columbus. Mexico boss Chepo de la Torre says Ochoa declined a call into the team because the starting job isn't guaranteed with Jesus Corona often preferred. Carlos Vela also won't be there, but he's picked up where he left off for Real Socieded, scoring and getting a yellow card in this weekend's draw with Elche. Diego Reyes and Hector Herrera both made moves to Porto this offseason. Reyes is yet to play while Herrera saw eight minutes of action in the club's opener. Neither featured this week. Jesus Manuel "El Tecatito" Corona will soon join this list, heading to FC Twente from Monterrey.

Luton Shelton is yet to score for new club Volga. He went 66 minutes in the team's 1-0 win against Terek Grozny in the Russian Premier League. Demar Phillips is in the midst of recovering from a knee injury and hasn't featured for Alesund since August 11. Tremaine Stewart also remains out with a knock and spent some time in Jamaica this summer. Lloyd Doyley went the full 90 for Watford in a 1-1 draw against Nottingham Forest. Nyron Nosworthy remains out with an Achilles injury. Reading were the better team but lost to Blackpool this weekend (Note: Writer supports Reading). Gareth McCleary started and went 56 minutes while Jobi McAnuff made the bench but didn't appear. Adrian Mariappa is trying to find his form and may get back in the team soon. Ricardo Fuller started for the victors but was substituted in the second half. Daniel Gordon played the full 90 in midfield for Karlsruher in a 1-1 2.Bundesliga draw. Jermaine Beckford played 72 minutes after starting for Bolton in a 1-0 defeat to QPR. Theo Robinson is off to a good start with Doncaster Rovers, scoring August 20. His club was out to a 3-1 lead at Charlton, but despite Robinson's Geoff Cameron-esque efforts, the match was abandoned because of a waterlogged pitch.

Jermaine Johnson should return soon for Sheffield Wednesday after serving a red card ban. Rodolph Austin got his name in the book as his Leeds United club beat Ipswich Town by a 2-1 margin. Marvin Elliott is still a mainstay at Bristol City, putting in a full shift in a 2-2 draw with MK Dons. Bodo/Glimt and Dane Richards fended off Mjondalen for a 2-0 win. Richards went the full 90.

Roberto Chen started Malaga's first match and had a fine performance against Valencia but started on the bench against Barcelona this weekend. Neymar was on the bench as well, one Panamanian journalist pointed out, but while the Brazilian superstar got into the match the 19-year-old defender did not. Lech Poznan lost to Wisla Krakow by a 2-0 margin. Luis Henriquez went wire to wire. Roman Torres went the full 90 for Millonarios in a 4-0 pasting of Deportivo Pasto. Also in Columbia, Amilcar Henriquez played all of Medellín's 2-1 loss to Once Caldas. Jairo Jimenez played for Chorrillo in the Panamanian league but moved to Spanish side Elche's second team during the transfer window. They're in the Segunda B, so we probably won't track his weekly progress, but he will appear on Julio Dely Valdes' roster. It doesn't look like he played this week. Forward Cecilio Waterman and goalkeeper Luis Mejia played the full 90 for Fénix in a 3-2 loss to Sud América. The U.S. won't face Honduras again in the Hex, so we'll fold any outrageous exploits from the likes of Carlo Costly, Maynor Figueroa, Emilio Izaguirre, JC Garcia, Roger Espinoza, and Roger Rojas into the CONCACAF Report. Whose performance strikes the most fear in your heart? Have we missed any players who you think should be in the U.S.’ game tape rotation? Any information you’d like to see in future editions? Let us know in the comments section! Jon Arnold is an ASN contributing editor. Follow him on Twitter.