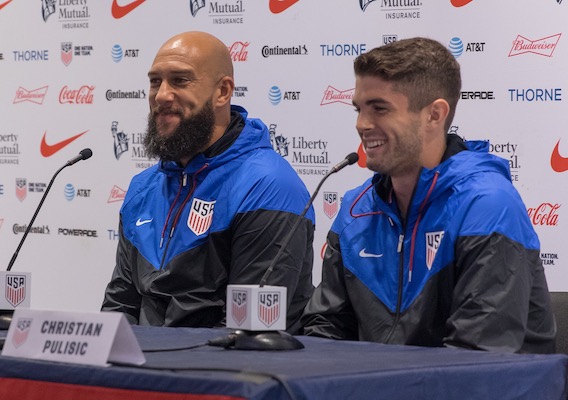 Costa Rica Rematch: That Was Then, This Is Now

NEW YORK—The name "Jurgen Klinsmann" was not uttered even once during Tuesday’s press conference—and it did not need to be. The message from two U.S. national team veterans came through loud and clear.

The U.S. is gearing up to resume its World Cup Qualifying campaign on Friday with a home game against Costa Rica. The last time these two teams met in qualifying, back in November, the Costa Ricans thrashed the visiting Yanks 4-0. The embarrassing result put the Americans' World Cup hopes in doubt, continued an extended poor run of form, and ultimately led to Klinsmann’s ouster and Bruce Arena’s appointment.

Nine months later, the U.S. is in a much better position. The Americans are 2-0-2 in their four World Cup Qualifiers since that lopsided loss, have gone undefeated through 14 matches in 2017, and took this year’s CONCACAF Gold Cup by going on a five-game winning streak that ended with a 2-1 triumph over Jamaica.

Performances, both individual and collective, have vastly improved. Some of the issues that plagued the team during Klinsmann’s tenure still exist—including inconsistent attacking outings—but the team as a whole has taken a massive step forward. Maybe even two.

The reason for the improved run of form? A change in attitude.

“For me, the biggest thing is always the mentality of your group,” U.S. captain Michael Bradley said on Tuesday. “How the group of guys, with the staff and with the coaches, feel they’re in something together and it’s not just a bunch of guys who come in and who are looking to do their own thing and who only care about themselves and what is good for them as individuals.

“The only chance you have is to have, again, a team full of guys and people around you that understand that everybody has to give a little bit of what they are to make everybody around them better. You can create this mentality. I think Bruce and his staff have done a really good job of getting that part back to where it needed to be.”

Under Klinsmann, it was crystal clear that the U.S. underperformed. Not only were players constantly being played out of position—Bradley as a No. 10, DeAndre Yedlin as a winger, etc.—but Klinsmann also threw them under the bus in the public sphere when questioned about his bizarre tactics. The players may not have complained much but their lackluster and uninspiring performances on the field, especially in that dreadful defeat to Los Ticos, spoke volumes.

Arena has brought a more straightforward approach with the group. He almost always puts his players in their natural positions, providing them the opportunity to play to their strengths as opposed to trying to get them to “push outside of their comfort zones," as Klinsmann often said.

Arena has also continued to introduce younger weapons into the fold. Klinsmann did do his share of that during his time in charge, but there has been a bigger change under Arena’s guidance. The increased playing times of Kellyn Acosta and Darlington Nagbe are examples of that, and when combined with the veteran leadership of Bradley, Tim Howard, Clint Dempsey, and Jozy Altidore, Arena has crafted a well-balanced team that is once again 1) full of confidence and 2) capable of bulldozing its way through CONCACAF.

“I think the form is probably led by the coaches and the coaching staff, just in terms of the expectations of how quickly we come together and form a team when we come into training camp,” Howard said when asked about the cohesion of the group. “The makeup of this team is probably the best that I’ve seen and the reason for that is we’ve got a really good nucleus of young guys. I know Christian [Pulisic] gets all the attention and rightfully so, but we’ve got a bunch of young guys—Jordan Morris, Kellyn Acosta—kids who aren’t afraid of the spotlight.

“I think a lot of credit goes to the older veterans in this group. We’ve got some guys who are superstar names who are getting older, who under Bruce’s tutelage have decided that they will take any role that is offered to them and help the team. I think with the national team you don’t see that a lot.

“When you’re an older superstar, most guys kind of throw their hands up and say, ‘I don’t need to travel. I don’t need the headache. I need to play every minute,’” Howard continued. “That’s not what this group is about, so I think from top to bottom the team is structured really well to not only be a good team, but to compete at every level.”

As good as the U.S. is playing right now, the main thing fans and observers will remember is whether or not it reached the World Cup. In that regard, there is still work to be done. The Americans need to pick up three more points against Costa Rica to avoid potentially slipping from third place in the Hexagonal, and they will likely need another strong performance to accomplish that.

Yes, the mentality and things overall may have changed for the better after Klinsmann’s exit and Arena’s arrival, but the work is not yet complete.

“We’ve worked real hard to be in the position to qualify for the 2018 World Cup, and in order to do that we have to have a successful set of games here in September,” said Arena. “Naturally, the game on Friday against Costa Rica is going to be very important if we hope to be in Russia in 2018."